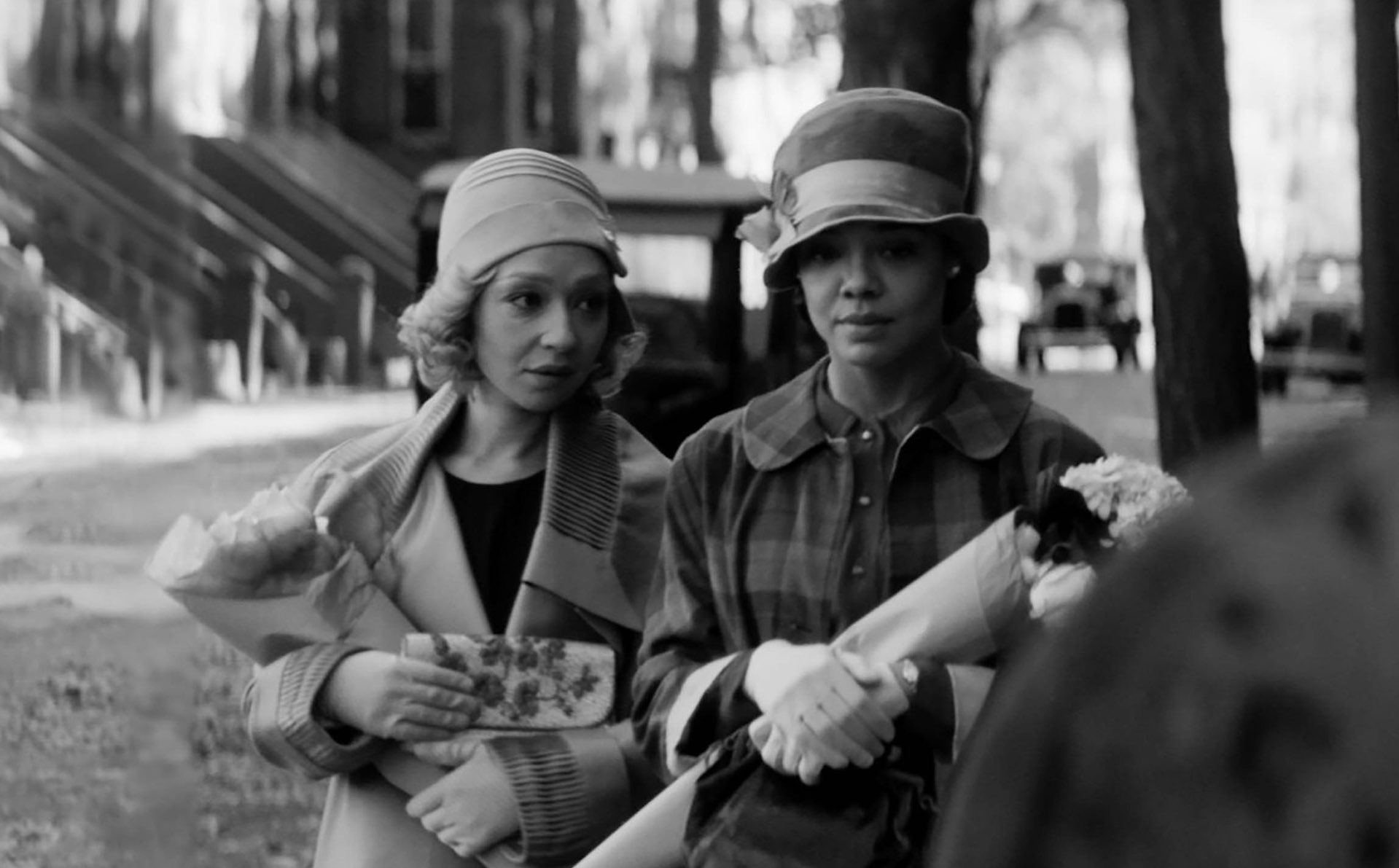 Rebecca Hall’s directorial debut, Passing, often feels like a high-wire routine, as if the actor-turned-director is suspended in the air above a hundred thousand bad decisions that might have sunk her film if she missed a single step. An adaptation of Nella Larsen’s 1929 novel, Passing is a tragedy concerned with the phenomenon of “race-passing,” and how possessing the ability to pass through white society affects the inner and outer lives of two then-contemporary Black women. There are the small questions that run through one’s mind when reading its summary in the Sundance program — will it look period-appropriate, or will everything be set in dull interiors like John Crowley’s Brooklyn, or will the black-and-white cinematography be too on the nose thematically – and the larger ones, specifically concerning whether Hall should be the person telling this story instead of a Black filmmaker. Happily, Hall manages to reach the other side with only one or two stumbles, and Passing is a really solid film, being a particular type of Sundance prestige picture that one might have assumed would have been lost in a truncated line-up.

Irene (Tessa Thompson) is the matriarch of a well-to-do Harlem family, looking after her sons and her husband (Andre Holland), a doctor, but she’s also got a second life in public that she never mentions to anyone. You see, Irene is white-passing, and in the 1920s, that means she can do things other folks in her position couldn’t – shop in exclusive stores downtown, take tea at fancy hotels, etc. – all without raising the ire of whites around her, unaware that they’re sharing space with a Black woman. On a fateful afternoon, she reconnects with Clare (Ruth Negga), an old friend from high school, who, like Irene, is able to pass for white, and she has immersed herself fully in that world. Clare’s married a rich white racist (Alexander Skarsgard), and lives a life of relative care-free leisure, provided that she can stomach his nearly ever-present torrents of racist abuse. But Clare’s husband leaves town, and she decides she wants to reconnect with her roots, using Irene’s connections and friendships as a jumping-off point. And, at a certain point, Irene comes to resent Clare’s presence in her life, and the evils of the white status quo do, eventually, assert themselves, and what results is a tragedy.

To say that Thompson and Negga are a study in contrasts, or that they’re genuinely fantastic in this film, are both understatements. The former’s easy grace and steady stately manner belie a series of deep insecurities, ranging from the security of her marriage, to how she’s perceived in her household by her maid, to her feelings about her rediscovered friend, to her children’s schooling, to her guilt over her ability to pass as white in the eyes of those at the downtown shops she frequents. On the other hand, the latter is a pistol, who commands the attention of the room and whose joyous, charming manner means that she’ll normally receive it. You, just as Irene does in the film, will fall in love with Clare’s manner, given that the film gets a shot of adrenaline whenever she’s present, in contrast to the more contemplative side of Irene’s personality, though you’ll also find some manner of frustration in her, too. Their supporting cast is equally as strong, with Holland, who is trying to navigate Irene’s insistence that they keep “the race question” out of their household when his sons are encountering prejudice in their daily lives, and Bill Camp, as an intellectual pal of Irene’s whom she talks matters of life from a semi-humorous “sociological” perspective with at parties, as notable standouts.

Now, I’m not as familiar with Larsen’s novel as I should be – there are other critics out there in the world who will be able to offer a more compelling comparison to it or even a general evaluation of the film’s themes than I can, and you should seek those voices out when the time comes – but Hall’s presentation of it is excellently done, and offers up a good explanation as to why she was a great fit for the project. This is especially true on an aesthetic level, where one fundamental choice, the decision to shoot the film in a stark greyscale, makes it both strikingly pretty and complementary to the film’s central subject. Her cinematographer, Eduard Grau (whom Hall worked with in front of the camera on a number of films over the last decade), makes the most of the format and crafts some often gorgeous imagery — an empty hotel dining room, bathed in white light; a large party in a nightclub, which, for me, at least, evoked a moment of the chaos at a similar one in Paul Thomas Anderson’s Phantom Thread; a shattered flowerpot covering the light grey concrete of the sidewalk in scattered dark dirt – in service of Hall’s fantastically-performed narrative. Passing is a great debut for its director, with two fantastic performances at its that are only made better – and sadder — by how great its visuals are, though that never overwhelms its thematic beauty.