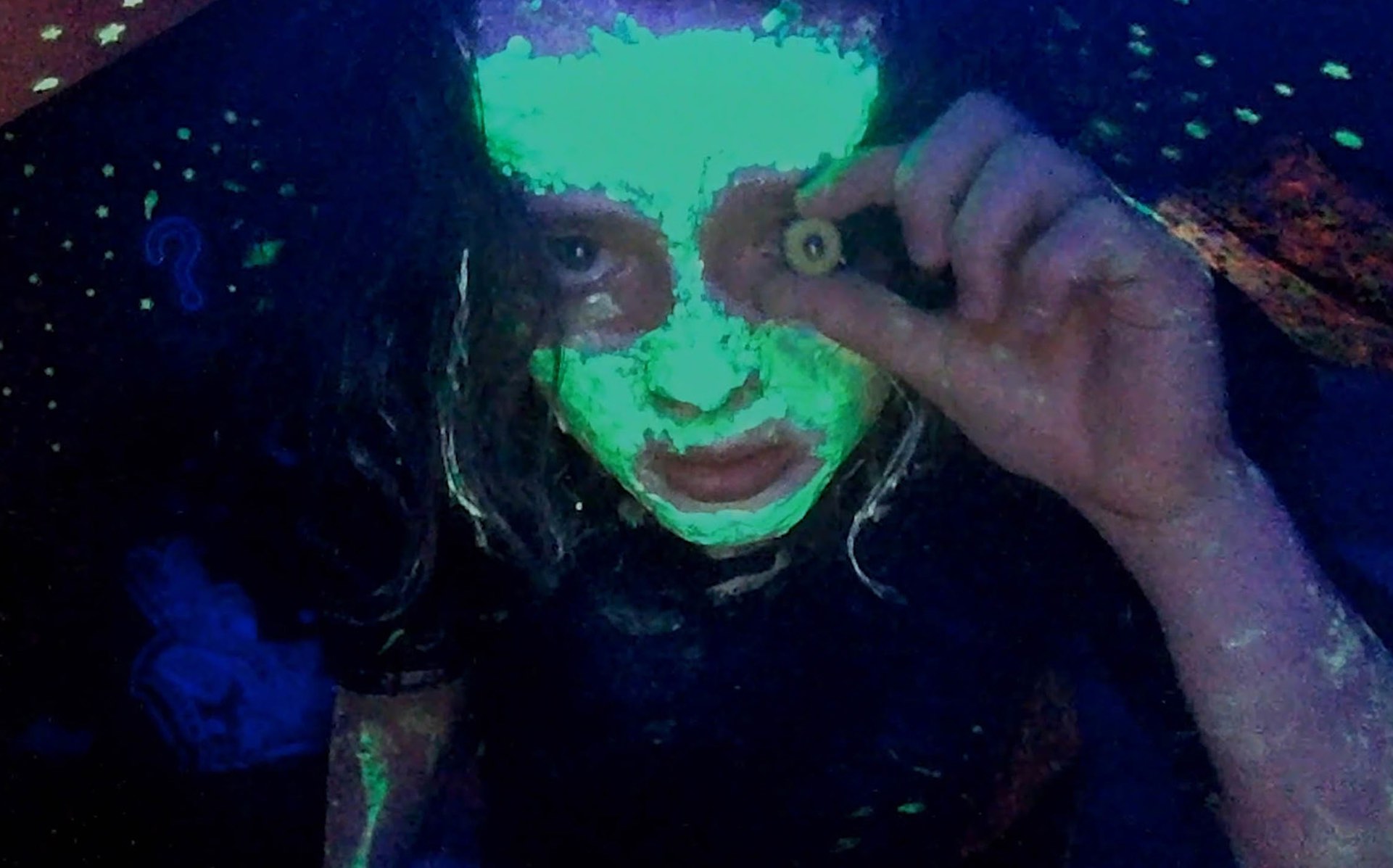 Pretty much anybody who grew up in the Internet Age will, on some small level, relate to Jane Schoenbrun’s We’re All Going to the World’s Fair, a deeply moving exploration of loneliness and alienation as seen through the horror-adjacent videos consumed and made by a young teen in Upstate New York. Casey (Anna Cobb) lives with her father — a presence barely felt and never seen on camera — in a relatively rural community and spends most of her time watching videos of a viral challenge. The film begins with her recording herself while she watches the “World’s Fair Challenge” in her star-covered bedroom, and we see strobing colors roll across her face, her eyes wide with a combination of fear and thrill, waiting for a jump that never comes. She tells her audience she’ll check back in with an update on her symptoms as they develop. You see, the “World’s Fair Challenge” causes some people to go a little batty, and affects their bodies in odd ways: A man finds a sore on his arm spouting tickets like you’d use to go on rides, others report on their fragile mental states, and she eats it all up.

It’s clear to most of the adult viewers, well-steeped in the phenomena of creepypasta and role-playing, know that this is a participatory fiction (though, to be fair, we are currently dealing with an entire segment of our population who cast aside the trappings of reality to embrace the central lie that a Manhattan real-estate mogul would turn out to be a child-protecting defender of the United States from the forces of Satan), and some does Casey, somewhat. She knows her videos are documenting her descent into the Fair are performances, but it’s less obvious that she knows that she, specifically, is making the choices behind them, and not the residual psychic influence of the Fair. This gets worse when, one night, a stranger reaches out to her online, and begins giving her advice about her videos. She begins working to gain that the approval of that person, whom she only knows behind a sketched-avatar of a hooded skeleton on the late-night Skype calls in which they talk about her “devolution” as well as her content, which begins to take a turn for the bizarre.

Cobb’s performance is utterly fearless, raw, and honest in the most cutting of ways, and Schoenbrun’s portrayal of her isolation is deeply empathetic and melancholic. Casey, like a number of folks who fall down these rabbit holes, wants a few key things: a community to provide a safe harbor, an acknowledgment of herself as a creative person of value, and, importantly, a sense of magic in her life, regardless of how unreal it may be. But robbed of the traditional outlets for those impulses in meatspace, where a physical community could provide her a modicum of safety on top of all that, she’s sought out a world online, full of inscrutable falsehoods and bad (or at the very least ignorant) actors about. What’s key about Schoenbrun’s approach here is that it’s not a specifically moralistic tale — they want the viewer to understand the thrills and the pain of online existence, especially when fantasy begins to encroach upon reality, where a person finds themselves wondering who exactly they are anymore after their identity has started to slip into a hazy space between the real and the digital, and when those terms start to become indistinguishable.

One could argue about any number of things in the film’s construction — do we really need as many clips of the others in this space or the meaning of the oblique ending — but images from We’re All Going to the World’s Fair will endure with me for quite some time, especially one particular scene near the beginning of the film. Late at night when she can’t fall asleep, Casey leaves her house and heads to a converted barn that functions as a relaxation spot and a workshop for her father. She opens a zipped up gun case hidden under a workbench and admires the rifle, and walks past a series of reminders of former gathering — a pool table, a couch, both of which have been long unused — before finally sitting laying down, cloaking herself in a blanket, and turning on a projector. On the screen, she watches an ASMR video where a kindly woman whispers that everything is OK and that she can go to sleep. Schoenbrun holds their scene for as long as it takes to fully soak in the quiet sadness of this moment, perhaps the best depiction of a moment that so many have come to understand in a horrible, isolated year like the one we’ve just had. A facsimile may be all you’ve got, but it’s empty calories: You will still go to bed hungry, desperate for the things you can’t quite have.