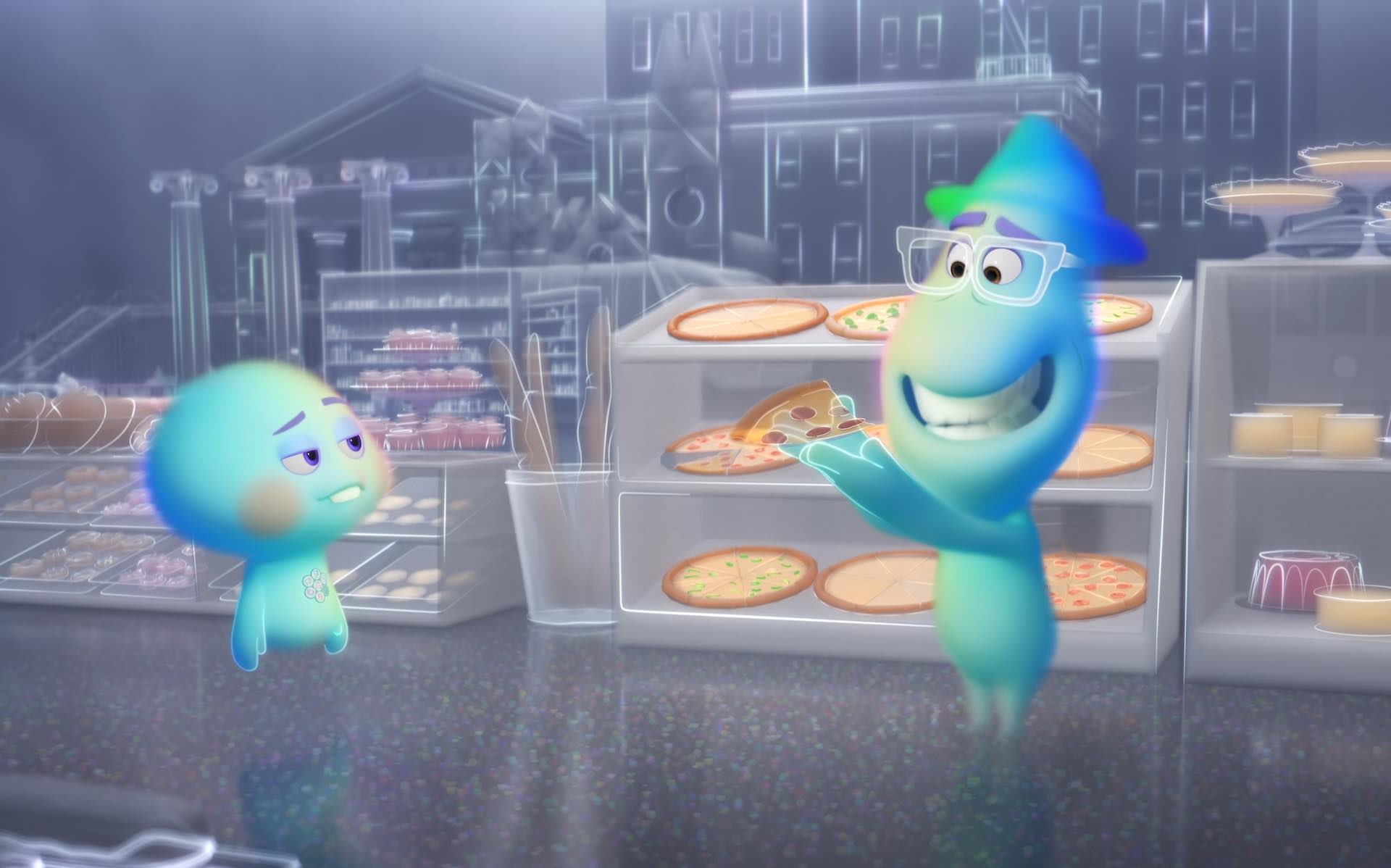 It may be somewhat safe to say that the world in which Pete Docter’s Soul was greenlit isn’t even remotely close to the one it is emerging into. What would have been an interesting metaphysical concept for a film — a Pixar-crafted examination of a potential afterlife following the assumed death of its protagonist (see, that’s what separates it from Coco) — is now rendered even more potentially meaningful and upsetting in the wake of everything that’s happened in this calendar year. One can understand why, on the corporate balance sheet, Disney would want to shunt this off on to streaming rather than attempt to preserve it for the summer much like they did with Black Widow: It’s a hard, hard sell for a lot of folks, at the moment. But Docter, the maestro behind such heart-rending classics as Up and Inside Out, has crafted a deeply-felt and occasionally very funny film, one that errs on the more experimental side of the Pixar oeuvre. It may not be as formally rigid as something like Onward, its traditionalist counterpart released earlier in the year, but it makes up for it in ample amounts of… well, soul.

Soul tells the story of Joe (Jamie Foxx), a well-meaning middle school music teacher who’s always had his eyes set on stardom. There’s nothing in the world that he wants more than to play piano for a crowd and to vibe with a number and a song in a blissful flow state, but he’s never been quite able to get there. His mother (Phylicia Rashad) believes he should give up the ghost and settle for what he’s already got in front of him — a stable career that allows him to do the thing he loves to do — but he isn’t content with that. It’s his passion. It’s what he has to do. And, one fateful day, a former student, whose class inspired him to pursue music professionally, gives him the opportunity of a lifetime: His band, led by Dorothea Williams (Angela Bassett), a saxophonist whom Joe greatly admires, is in need of a piano player for a series of shows that they’re doing at a local club. Joe aces the try-out, and Dorothea asks him to join them on the keys that night. He’s on top of the world, so happy, so gleeful, so distracted that he doesn’t notice an open manhole and plunges down it.

Joe then awakens in The Great Beyond, a great and vast dark space illuminated only by a pathway leading to a giant white light. He’s died, it seems, and he’s stuck with the rest of the blue-blobby souls on their way to oblivion, who leap into the bright void and are zapped away like flies hitting an electric swatter. Understandably, he freaks out, and manages to find his way out of line, plunging into the nether realms between the universes until he winds up in a purple-skied place full of young souls, their elder soul guides, and their otherworldly caretakers, who are 2D members of a metaphysical bureaucracy. It’s called The Great Before, and it’s where souls get their attributes and find their “spark” before jumping through a big portal and making their way to the show. Unwilling to embrace oblivion, Joe pretends to be a guide, and is assigned Twenty-Two (Tina Fey), a longtime thorn in the side of her caretakers, who have assigned her famous mentor after mentor over the eons, and who each have failed to reach her and prepare her for life on Earth. But, in this role, Joe sees an opportunity: Twenty-Two doesn’t want to go to Earth, and he can use her pass in order to land back in his body, which lies in hospital, dangling between life and death. So, the pair strike a deal and embark on a journey with life-altering and life-beginning consequences, all the while being tracked by the caretakers.

Soul has three distinct and interesting acts — most of what you’ve seen of the film comes directly from its first 20-or-30 minutes — and to delve more into what the last two-thirds of the film contains would be almost criminal. But, having expected to cry my way through much of the movie (look, I had some feelings I really needed to feel, ok?), I was broadsided by how incredibly funny the film is. In fact, it might actually be the funniest Pixar film to date, thanks to just how broad and weird Docter is willing to get with his metaphysics and with his slapstick. Twenty-Two’s mentors, each highlighted in a cut-away flashback gag, are pitched smartly as a comedic steam-release valve when shit gets too upsetting, and though it’s not a particularly novel concept, the bureaucratic world of the caretakers is genuinely very funny, especially as various departments sabotage one another and make errors in the real world in their pursuit of Joe and Twenty-Two. And said gags are given to a fantastic voice cast, who, besides Foxx and Fey, are rounded out by folks like Graham Norton, Richard Ayoade, Alice Braga, and others.

It’s a genuine bummer that Soul didn’t get a chance to be seen theatrically on these shores, because it is an astonishingly beautiful film, one that plays with abstract, cartoonish animation forms in its scenes set in the Great Beyond and Great Before while also providing some of the best photorealistic digital animation when it’s taking place here on Earth. I’ll speak to the latter first because it’s the most recognizably impressive. With each subsequent film and advance in technology, Pixar has honed in on its ability to craft the small details with a precise realism (one only needs to look at the astonishing level of detail in something like the 2016 short Piper for an example), but Docter’s the only director who’s been able to put that skill to its full heartrending potential, and Soul‘s focus on small objects and moments feels pointed, be it the way the wind rushes through a character’s jacket, or the way a leaf lands in one’s hand. The colors, the warmth, the speed at which it unfolds, the perspective — all of it adds up to something truly special and achieves a sensory recognition that feels, well, more real than a live-action film might be able to offer up in the same situation.

The Great Before, on the other hand, is where Docter and the Pixar art department get to flex their creative muscles, crafting an on-screen version of purgatory that’s both familiar and yet innovative. It’s not particularly dogmatic to any particular religion (do you think Disney would really be willing to step on that Bouncing Betty?), but it is broad and abstract to accommodate the beliefs of the viewer while physically rendering a lot of nebulous concepts down into easily-digestible images. In contrast to the “real” world in the film, it’s rendered mainly in darkened pastels, vibrant and deep, which both suggest the place’s age and its unreality. It’s very lovely in practice, and it’s effect is enhanced by the brilliant score by Trent Reznor and Atticus Ross, who bring a synth-heavy ambient vibes to these scenes (to wit, Jon Batiste wrote the jazz pieces that Joe plays in the Earthbound sections of the film, and he does a fantastic job as well). Each of these places compliments the other and multiplies its emotional impact, and it truly is some of the best work the studio has ever done.

If there’s anything truly frustrating about Soul, it’s that it doesn’t totally stick the landing, and, in deliberate contrast to a number of other great Pixar films, refuses to show us how the journey its characters have taken have changed their lives in any meaningful way, especially after the main events of the plot have concluded. So many of the grace notes Docter hits along the way are so perfectly-tuned that it’s disappointing to not see them pay off outside of the context of the metaphysical narrative, and perhaps its open-endedness is intended to suggest a bounty of possibilities for its characters, allowing the audience to think about what they themselves would do with the scenario presented to them. In practice, it feels truncated, lacking the resolution one would hope to see in such a parable, but that doesn’t mean the journey isn’t worth taking.

Some will find the observations about life and its meaning that Docter makes treacly or smarmy, but I think this might be one of the few Pixar movies in recent years, beyond the Cars films and Coco, to heavily consider the perspective of the child in its formulation. Onward, while a cracking tale in its own right, spoke mainly to adults thematically even as its humor was pitched towards children, and each of the sequels released in the interim between Inside Out and Soul felt geared towards those who had grown up with those original films. If Docter’s mission in recent years has been to give children a way to express and process the deep and very real thoughts and feelings they have about subjects that adults genuinely have a hard time grappling with themselves, Soul may be another success, even if parents might not particularly want to deal with it at the moment, given the state of things at the moment. So, if things do feel a little bit intro-to-philosophy-and-metaphysics, well, you know why. But, all in all, Soul is a life-affirming and lovely film, full of comfort and heart, and it’s just about the perfect cinematic Christmas present.