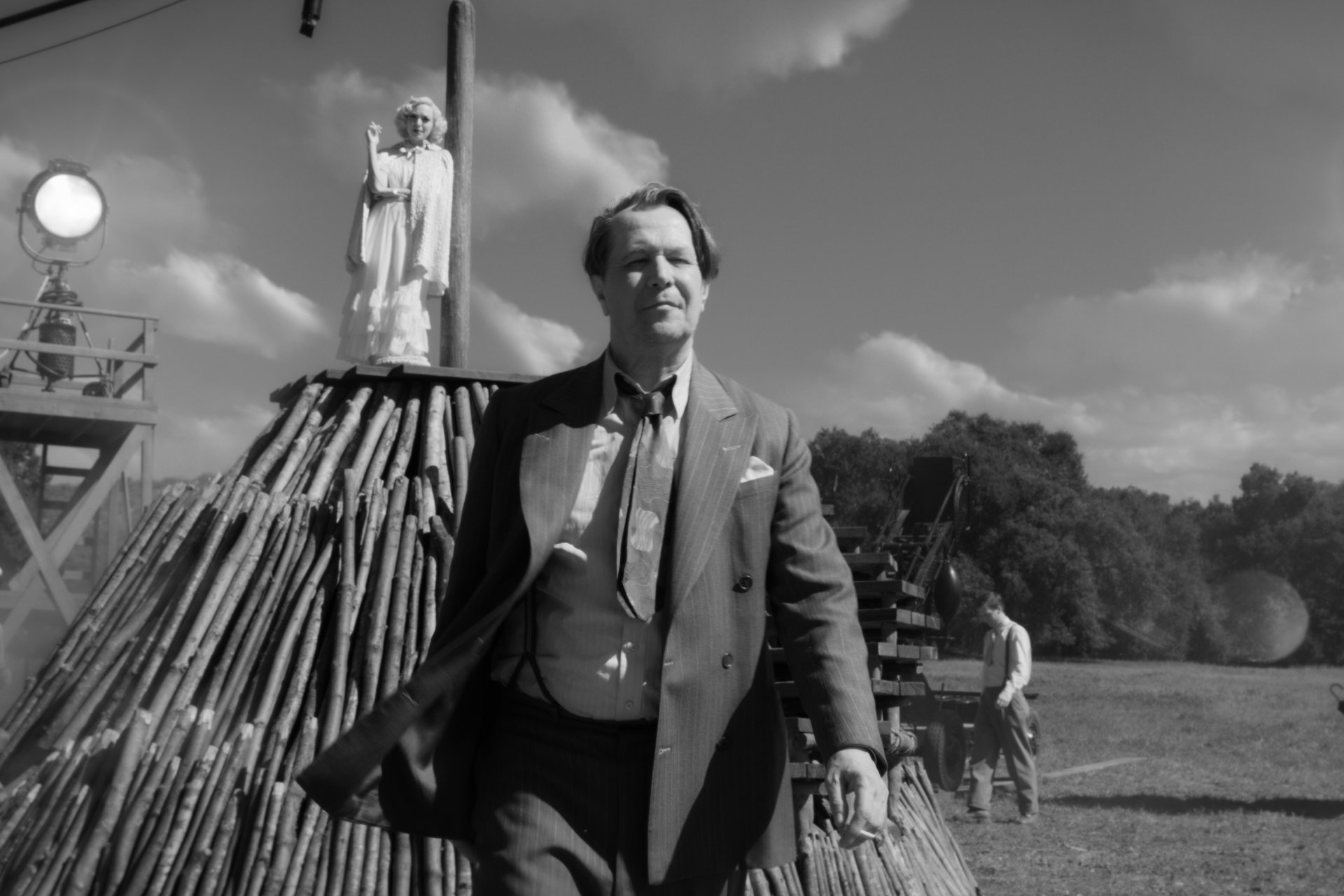 It shouldn’t surprise anyone that David Fincher’s Mank is a complete break from what we’ve come to expect from the filmmaker over the course of his nearly 30-year career as a director. Fincher’s famously known for his steely-eyed and methodical approach to populist cinema — since 2010, his source material of choice has been the kind of airport paperback that, in the right hands, could be transformed into something closer in line to classic film noir than what a contemporary of his might do with it — but he’s often reserved for himself a single and highly-emotional film, usually around in the back end of a given decade, to explore other styles and means of expression. The first of these, 1997’s The Game, saw him refine his approach to the thriller, but in a shockingly meaningful way (the ending of that film still hits me like a ton of bricks); the second, The Curious Case of Benjamin Button, was an attempt to grapple with aging and, ultimately, death, through the usage of metaphor serviced by innovations in digital effects; and now, Mank, a tribute to writers and, specifically, his late father Jack, who penned the screenplay. It is a lovely, vivacious film, full of wit and humor evocative of the best of Old Hollywood writing spouted from the mouth of one of our greatest actors, gorgeously rendered in a luscious grayscale that will make both HDR televisions and film screens pop.

Mank‘s A-story depicts the most pivotal months in the life of screenwriter Herman J. Mankiewicz (Gary Oldman), one of the Golden Age of Cinema’s greatest wits, a drama critic and playwright who, like so many of the minds of his generation, headed to Hollywood in search of steady work and free-flowing liquor. We’re introduced to him as he’s being placed in a convalescent home to dry out and let his broken leg heal after a car accident and begin work on a project for Hollywood’s latest “boy genius,” Orson Welles (Tom Burke). He has 60 days to write what he thinks will be his masterpiece, which he occasionally dictates to his typist, a young Englishwoman named Rita (Lily Collins), though it’s feared by his minders that he won’t make Welles’ deadline. But Mank knows what he’s planning to write, and, in a series of flashbacks, we learn why the washed-up screenwriter would write a film like Citizen Kane, even though he was once a friend to William Randolph Hearst (Charles Dance), the film’s target, and Hearst’s wife, the actress Marion Davies (Amanda Seyfried). The film’s B-story consists of flashbacks over the course of those friendships, where Mank trades barbs with studio heads like Louis B. Mayer and Irving Thalberg at dinners at Hearst’s home, or has pleasant encounters with Davies on the set of one of her films. But when Mank is eventually disillusioned over Hearst’s meddling in the 1934 California gubernatorial election, the seeds are ultimately planted for Kane.

The first thing you’ll notice about Mank, especially when you read lines like “the script is astonishing,” is how weird and tinny the actual audio track sounds like (the lovely vintage-styled score by Trent Reznor and Atticus Ross is often excepted from that). This is because Fincher, in direct contrast to the deliberate construction of other Old Hollywood fetish objects like Steven Soderbergh’s The Good German, wants to try to bring aspects of the old-fashioned celluloid theatrical experience to the home in whatever way he can, from the slight projector-like hum present during quiet scenes to the aforementioned echo present in the dialogue. It sounds like you’re listening to the film in a large auditorium, and there’s a fun and deliberate contrast between what you’re seeing on-screen with what you’re hearing. The film’s cinematography is deliberately modern, even if it is in black and white, and its DP, Erik Messerschmidt, collaborated previously on Fincher’s Mindhunter. He’s one of the few cinematographers who understands how to properly light a scene for High-Dynamic Range, regardless of the calibration of one’s television, and, Christ, is it just gorgeous to look at. It’s visuals are often in conversation with Welles (a bottle hitting the floor deliberately echoes Kane in perhaps the most overt moment), and include outright concessions to the physical media form (cigarette burns, vintage fades and dissolves) but its imagery serves as an modern cinematic evaluation of the whole of Old Hollywood, and that stresses the immediacy of that comparison.

As alluded to previously, Fincher the elder’s script is astonishing, full of the kind of whip-fire wit and dialogue that could only come from a mind like his, with specific bon mots so good that you’ll want to swish them around in your mouth like a fine vintage. It’s an often unsparing portrait of Mankiewicz, whose alcoholism has aged him well beyond his 43 years (at least in the framing story) and who can be callous in his need to be the “smartest” man with the quickest line in every room, but Oldman does a lovely job balancing his eventual growth from bon vivant to man of semi-conscience. He’s still an Arthur-like lush, at least to those around him, but his heart remains intact. There’s a lovely little scene where Mank and Davies go on a walk around Hearst’s palatial estate after the actress makes a cutting comment in during Mayer’s birthday party that’s part extended flirtation and part true empathetic connection. Both are underestimated by those around him — Davies, an intelligent, brassy and charming young woman, by her husband; Mank by his peers and the men who essentially keep him around as a court jester — and this brief moment allows the pair to relish in one another’s company as people, not their roles. Perhaps one should extend that courtesy to Fincher himself, whose often unsparing style of cinema has left many out in the cold, and who may be utterly surprised by the warmth that often radiates from the screen in Mank. It is a lovely film, a gorgeous tribute to writers the world over, and one of the best releases of this calendar year.