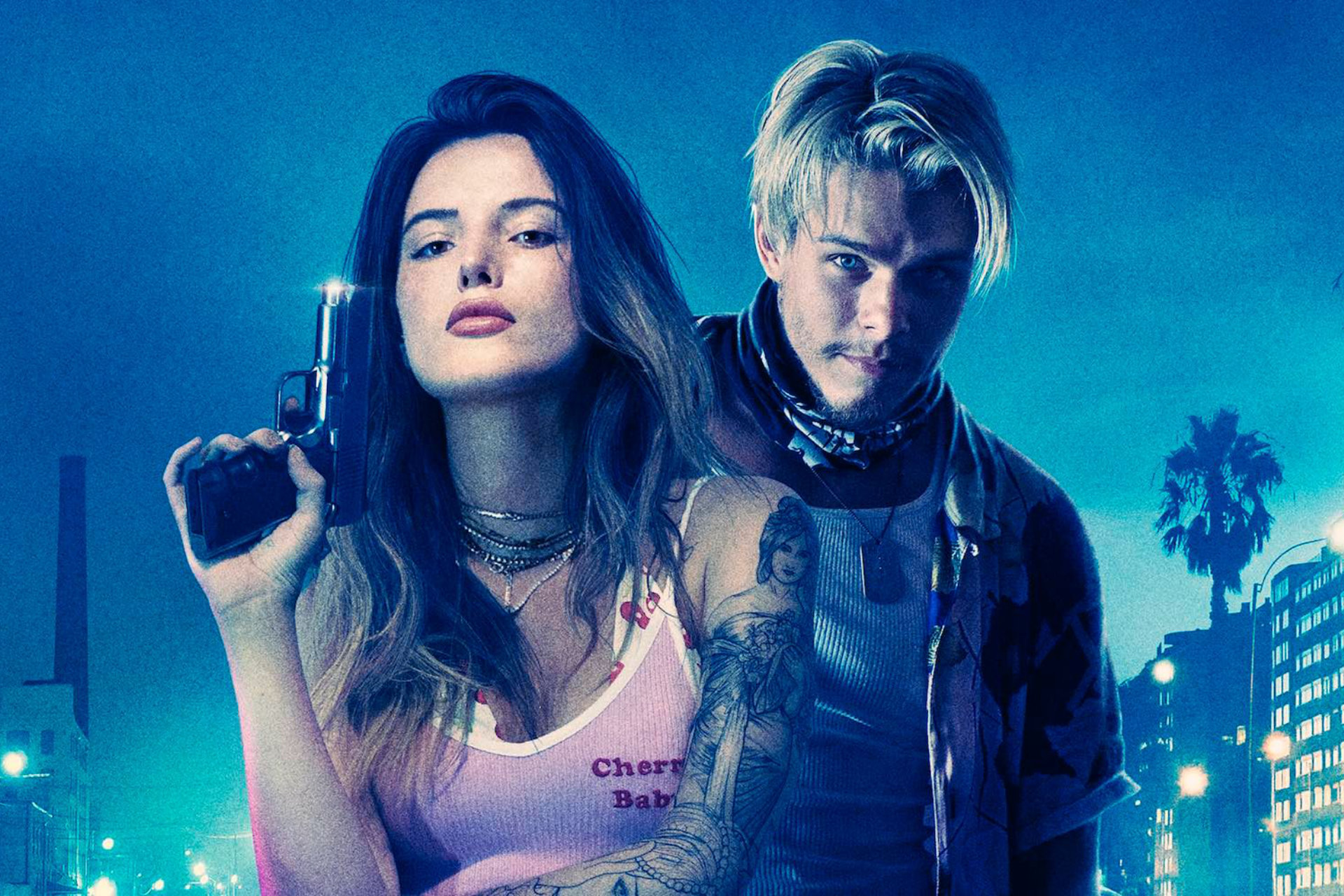 A lot of smart people have tried to consider exactly why it feels so impossible to adapt a video game into a workable film property, but I’m slightly worried that they’re tackling the wrong tech-based subject matter. More concern should be given to how movies are tackling social media, which always either feels impossibly hacky and/or out of date — unless they’re the ones inventing the trends, Hollywood always takes years to adapt to a particular moment — and the latest victim of this is Joshua Caldwell’s Infamous, a DTV Bella Thorne vehicle, which, save for her performance, is pretty forgettable. It mistakes a mild form of criticism about doin’ wild shit for the ‘Gram for true insight, and it’s just window-dressing on the same ol’ “bandits in love” story you’ve been reading about for decades.

Arielle (Thorne) is a bored Key Largo 20-something who spends her time either working a dead-end waitress job, partying, wandering around her town smoking blunts and blasting breezy pop songs through her Bluetooth headphones, or scrolling through her various social media feeds. She has a feeling that she’s destined for greater things, and wants to move out West with all of the money that she’s saving up from her jobs. And, sure enough, she finds her escape hatch: Dean (Jake Manley), an ex-con mechanic who’s dangerous, hot, and pisses off all the right people in her hometown. The two begin a bad romance, fuckin’ in cars and smoking lots of weed (there’s a theme here, can’t you tell?).

But, on a fateful day some weeks later, Arielle’s savings are stolen, and she goes to visit Dean and his father. An accident occurs, and the old man winds up dead. So the pair go on the run, but they’re cash-strapped and desperate, so they start sticking up convenience stores and dispensaries (the film’s best line of dialogue sees Arielle tell a skeptical heavy that those latter heists go off without a hitch provided that they don’t go down at 4:20). Dean’s been to prison, so his attitudes about his crimes are measured and cautious, but Arielle sees this as an opportunity to growth hack: she starts an Instagram account for the couple and starts posting videos of their crimes to it. Soon enough, the pair has millions of followers, as well as the police breathing down their necks. And Arielle, stoked about all this fame, starts going off the handle more and more, leading to some bullet-ridden bodies and blood-splattered dollar bills.

So, yeah, this is pretty much what you might expect it would be, and Caldwell seems diametrically opposed to adding anything to this well-trodden formula beyond some bisexual lighting to the proceedings. Well, aside from Bella Thorne, who I always love to see pop up in movies like this because she’s like vinegar to any mild-mannered film’s baking soda. Thorne’s hyperemotive-and-active onscreen persona is an excellent fit for this role, which sees her vacillate from bored Key Largo teen to psychopathic bank robber — one who has no trouble blasting a cop who bothers her later on in the film — and she’s always a magnetic screen presence when she’s working out of the YA romance genre. The same can’t really be said about those who surround her in the film, especially her on-screen beau. Manley is a non-presence, who is downright overpowered by her sheer-force-of-will in most of their scenes together, though this ultimately helps the film’s conclusion land more so than it would if it were something like Badlands. But this is her vehicle, after all, and it would almost be a shame for her to really share the spotlight here.

Caldwell’s direction is fine, for the most part: His heist sequences are relatively thrilling, the outbursts of violence shocking, and his synthpop-scored love scenes are compelling enough as escapist on-screen fantasies go. But I don’t really know why Infamous left as much of a bad taste in my mouth as it did. Perhaps it’s because Thorne, as great as she is, can’t really elevate her surroundings, and her romance here is a non-starter. Perhaps it’s the aforementioned trite commentary on social media, which has been explored to death at this point by genre films of all stripes, with the overwhelming majority failing at it (Ingrid Goes West being a notable exception). Perhaps it’s because the last film that aped the Bonnie and Clyde story — Queen and Slim — was forced to acknowledge the tragic circumstances of their protagonists, and attempted to place them in a somewhat realistic, if stylized, world. It is a bit weird to watch this film in comparison to that one, and I think the differences — especially in their finales — make them crystal clear. So, if you want to watch attractive people rob banks and romance one another, there are better options, but Infamous is a passable substitution in a pitch.