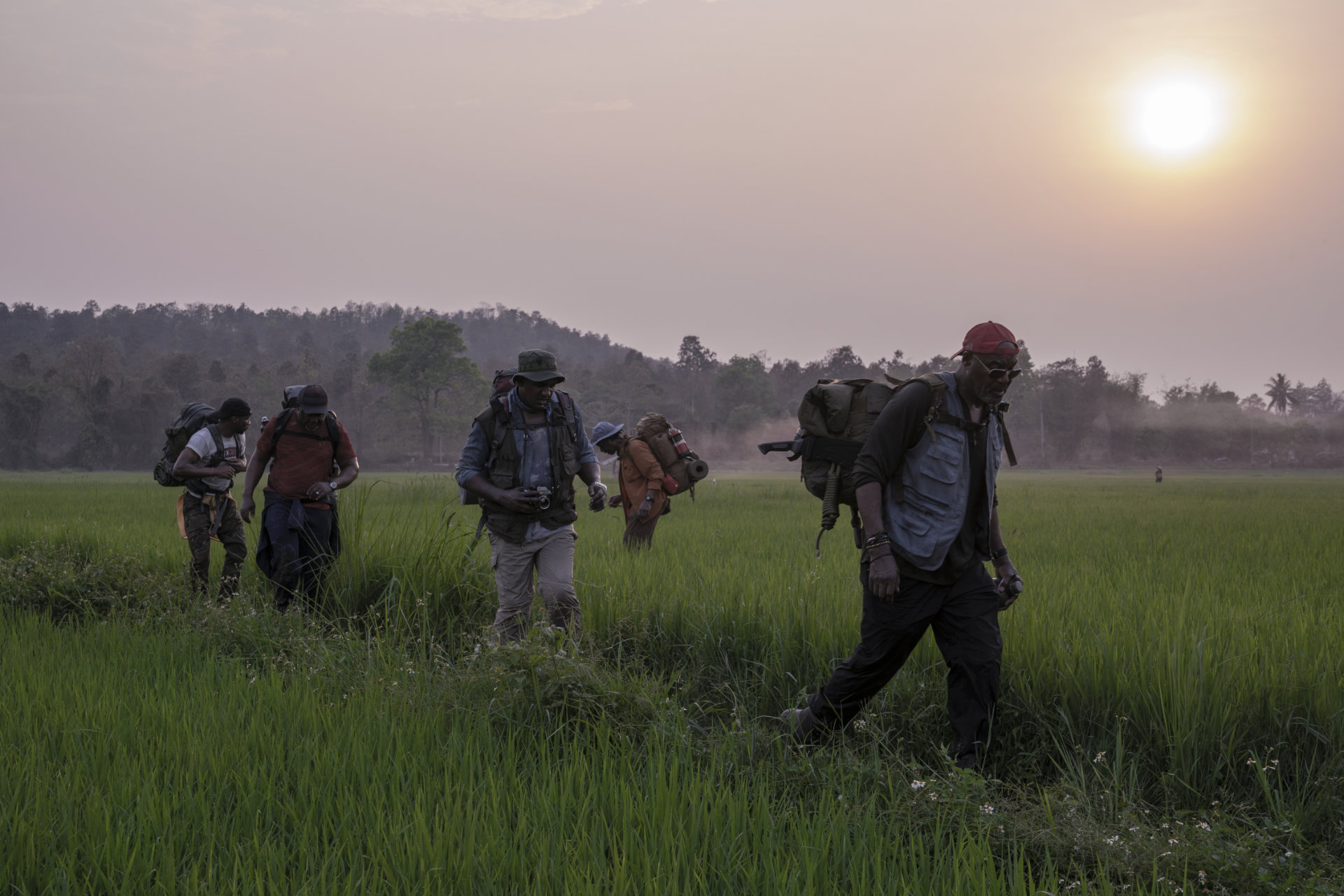 I’ve said it before, and I’ll say it again: The last 10-or-so years of Spike Lee’s career have been some of the most fascinating that any director has had. He’s an incredibly prolific director, and what few misfires of his that have hit screens are often offset and/or enhanced by his successes. But BlacKkKlansman captured the cultural conversation in 2018 and became his most successful film in years, and Lee finally won an Oscar for his work. Now, in the midst of another tragic moment of our Country’s reckoning with its ever-festering original sin, Lee has returned with Da 5 Bloods, a messy, long film about the Vietnam War and its effects on Black America, from the lives it ended and altered, to the protest movements it kickstarted, to the cultural creations it influenced — chiefly, in cinema and in music (Marvin Gaye’s What’s Going On provides much of the film’s soundtrack). It is just as urgent and fiery as its predecessor, and Da 5 Bloods is yet another masterwork from Lee, one that demands your immediate attention.

Da 5 Bloods is, on the surface, about four Vietnam vets who return to the country in the present-day to recover the body of their former squad leader, Stormin’ Norman (Chadwick Boseman), who was killed during a special operation. Otis (Clarke Peters), Melvin (Isaiah Whitlock, Jr.), and Eddie (Norm Lewis) have had an easier time coping with their trauma than Paul (Delroy Lindo), a fiery Trump-voting man who remains scarred by the experience of watching Norman’s death. Vietnam’s changed — Ho Chi Minh City now has McDonald’s and KFCs on the street, and the war is obliquely referenced in disco dressings (an Apocalypse Now logo hangs behind a DJ in one early scene) — but they’re still living with the war’s effects on them. But they’ve got a purpose, after all, and the foursome, along with Paul’s son David (Jonathan Majors), embark to complete this final mission.

Well, actually, they’ve got two missions. You see, when the Bloods were sent on that operation back in the day, they were going to find some special goods in a downed CIA plane, and what they found was something a little more important than they thought: a literal box of gold, containing millions of dollars in bullion. Norman tells his squad-mates to hide the gold and come back for it later, and to use the funds for black liberation — reparations, in fact, and they’ve come to make good on their promise to him. But when you add gold, a French fence (Jean Reno), and each man’s financial and moral struggles in dealing with these newfound riches, you’ve got a recipe for disaster, and the Bloods will be tested like they haven’t been in decades. And, per usual, Lee tackles a number of ever-relevant issues with the complicated carefulness that they deserve — generational conflicts between black fathers and sons, the legacy of colonialism in Asia and those working to avenge the sins of their fathers, and exactly how the Vietnam War affected black soldiers, who have often been excluded from mainstream films about the war, especially as protagonists.

Each member of the ensemble is strong, as Lee’s casts always are, but Lindo is superlative, taking a fascinating and contradiction-ridden set of traits and forming them fully into an empathetic and tragic character that enthralls every moment that he’s on-screen. His trauma is explored and showcased without ever feeling exploitative, and his descent into grief-stricken madness is only enhanced by Lee’s willingness to just let the man work. Though the film is stacked with allusions to John Huston’s The Treasure of the Sierra Madre — itself a story of a band of gold-seeking men driven apart by the money — none feels more appropriate than in the moments in which Lee just lets Lindo monologue at the camera for extended periods while tracking him through the jungle, much like Bogey did in Huston’s work. It’s a discomforting choice made to alienate the audience, but good god does it work like gangbusters, and I doubt you’ll find a better performance this summer, much less the rest of the year.

Lee’s work has always been stacked with allusions to the films he loves, and his watch-list is essential for young folks or those beginning a study of the medium, but I love the free-associative style that Lee has adopted in some of his later works. He’s one of the few filmmakers willing to pause moments in his narrative to reflect on the past (Adam McKay often tries to be like him, but fails) or to highlight a small piece of knowledge or pop culture in the moment to inform its mood. He’s one of the few filmmakers who could pause the tensest moment in the film — in which Majors steps on a landmine’s pressure pad and the assembled crew have to figure out a way to get him off the sensor without blowing the young man up — to highlight the legacy of sprinter Edwin Moses, who won Gold in both the ’78 and ’84 Olympics. It’s a detail beautifully used that doesn’t distract from the panic and urgency of the moment and gives the whole scene an extra, added layer of context: he’s showing us both how our characters think and also illustrating the depth and application of Black history at the exact same time.

It’s also a technically fascinating film, and, once you see its construction, you can see why Netflix was the perfect home for a project like this. One can only imagine the poor projectionist having to change the theater’s masking whenever Lee changes aspect ratios — a grainy 16mm 4:3 for the sections set in the war, to widescreen for the cinematic moments in the modern Vietnam, to full-screen when the shit gets real in the Jungle. His action direction has never been stronger, and it’s always clear and concise, given a solid and easy-to-parse geography. But there are a number of lovely and interesting choices that Lee that make all the difference, as well. For instance, in the scenes set during the war, rather than slathering his older actors in make-up or using CGI to erase their wrinkles (sorry, Marty), Lee chooses to have the actors remain old men, with the exception of Boseman. It illustrates the vividness of their memories — this is, after all, their recollection of these events — and informs how they think of their own actions in the past.

I do wonder if this will lead other viewers to check out Lee’s Miracle at St. Anna, which, in some small ways, feels like a dry-run for this film, with its dueling time periods and portrayals of how the US Army has used its black GIs as cannon fodder. Hell, even the scenes featuring Hanoi Hannah (Veronica Ngo), the Tokyo Rose-like voice ever-present on the radio bands telling black soldiers to lay down their arms and revolt against a country that doesn’t believe in them, feel akin to what Lee did in Miracle, but they’re put to better use here. That older film got a terrible reception back in the day (as to why, I’ll never really know), but it feels enhanced and in conversation with Da 5 Bloods. All I know is that Spike Lee really is one of the greatest American filmmakers currently working, and that Da 5 Bloods is one of the best films to hit screens in this shitty year.