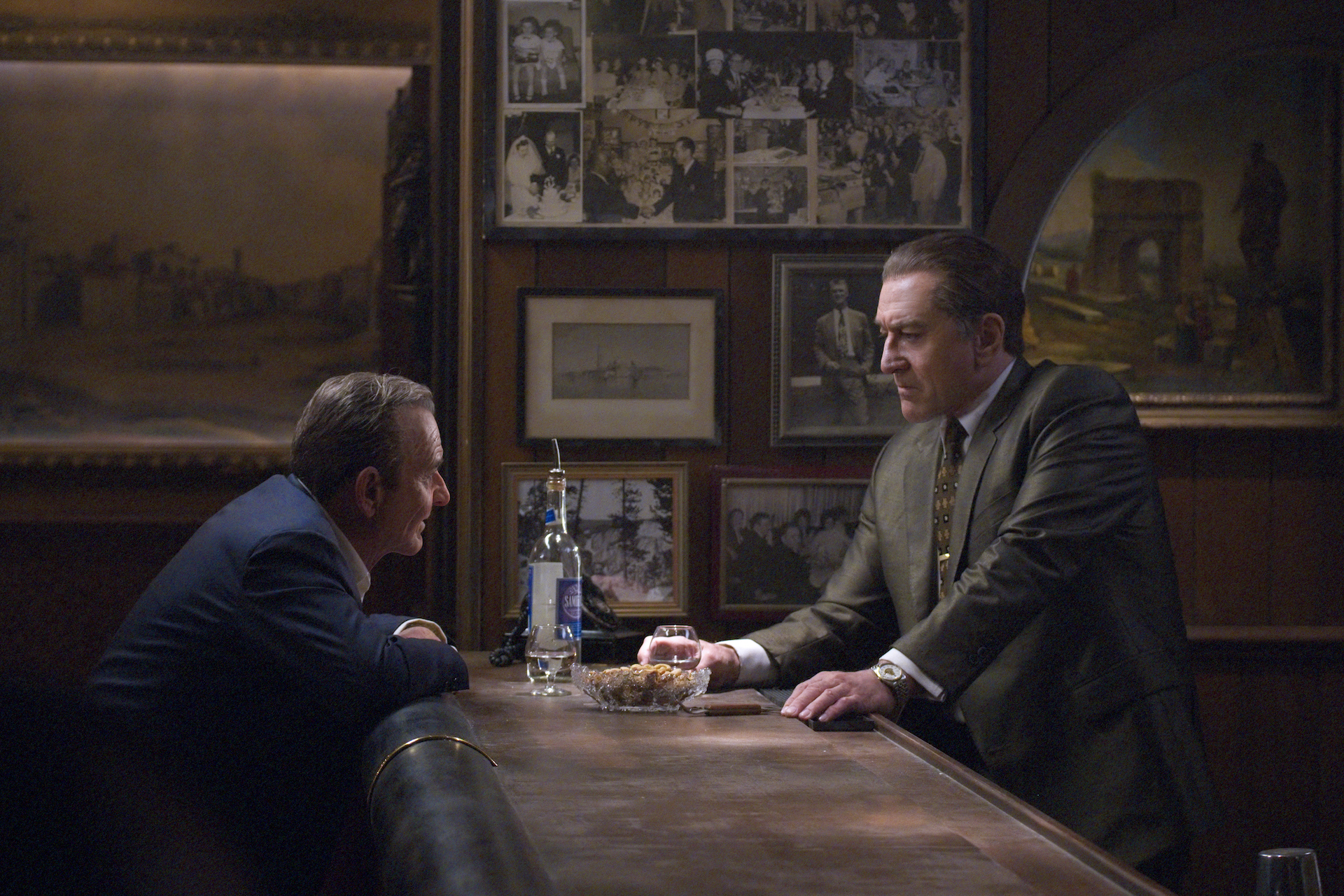 Martin Scorsese is going to die, and one could say that the entirety of the 76-year-old director’s narrative output this decade has been consumed with that fact. In Hugo, he paid tribute to the art form that he’s dedicated his life to, and took solace in the knowledge that his work might be remembered by future generations, much like Georges Melies’ was rescued by Scorsese’s young protagonists at the film’s end. The Wolf of Wall Street was as much self-criticism as it was societal, rooted in both a deep-seated distrust of materialism and a hatred for the life-rending powers of addiction. His last film, Silence, felt as definitive a statement on his closely-held faith as he could get without outright remaking The Last Temptation of Christ, using Endo Shusaku’s classic novel as a parable to interrogate his beliefs. Yet each of these films feels somewhat quaint in comparison to the nervous handwringing about mortality that Scorsese does in his latest film, I Heard You Paint Houses (or, as Netflix wants you to know it as, The Irishman, even though the film itself wants to avoid that title), which feels about as succinct a statement on life and death as one can get, done in the way that only he can do so.

Based on Charles Brant’s non-fiction book of the same name, I Heard You Paint Houses gets its title from the first phrase Jimmy Hoffa (Al Pacino) ever said to Frank Sheeran (Robert De Niro), in which the Teamsters president covertly sought confirmation that the Irishman, a G.I. turned mob hitman turned union man, was a contract killer. Told by the aged gangster decades after the fact as he sits in his nursing room’s visiting rooms, Sheeran’s story is as vast and wild as the 20th Century was itself. Thanks to a random chance encounter with Russell Bufalino (Joe Pesci, at his most restrained and quietly intimidating here) at a filling station, the Irishman finds himself in with the Philadelphia mob through sheer chance and spends the following decades doing dirty work for them. He’s eventually put in contact with Hoffa, thanks to Bufalino, who hires him both as protection and as a picket line enforcer. The government’s circling the charming and fascinating union leader, whose mob connections and liberal usage of the Teamsters’ pension fund is drawing attention from the government. Frank immediately takes a liking to Jimmy, and the pair grow close over the years. But as Hoffa’s profile grows and he becomes more infamous, he begins to come into conflict with the mob members that he associates with, and eventually “disappears,” setting up a decades-long conspiracy of silence that Scorsese is dedicated to cracking here.

Though many viewers will focus on the trio of De Niro, Pacino, and Pesci, it’s the group behind the camera — Scorsese, writer Steven Zaillian, and the director’s longtime collaborator and editor Thelma Schoonmaker — that proves to be the real draw here. I — and to a more significant extent, he — shouldn’t have to remind you why the director is considered a master of the craft for a bevy of reasons, but his framing has never been more exquisite, and the performances that he coaxes out of his three leads are compelling and devastating. Equal measure of praise must be doled out to his work with Pacino and De Niro, both of whom are captivated by the material in a way that they haven’t been in years. Pacino brings all of his charisma, charm, and arrogance to the oversized Hoffa, and De Niro quietly devastates as he walks through more and more complicated emotional terrain, as even though the soldier-turned-hitman thinks he understands what it means to take a life, Sheeran finds out that he doesn’t. Even Scorsese’s embrace of new and potentially-risky technology, present here in the form of digital de-aging, which each major actor undergoes in the flashback sequences, pays off handsomely, though its application, especially in De Niro’s case, may confuse people expecting to see the actor’s fresh-faced Taxi Driver-era visage in the past.* He spent every penny that Netflix gave him wisely, whether the VFX work here, or whether it’s blowing up a whole bunch of vintage taxicabs as a punchline to an already-expensive setpiece.

Zaillian, who previously worked with Scorsese on Gangs of New York back in 2002, has been working on this project over the last decade with the director, and time has afforded his work here a real polish. His screenplay hews closely to the structure of Brandt’s novel, even going as far as to preserve the book’s in medias res prologue before flashing back decades earlier, and he does a fantastic job of retaining Sheeran’s voice in both dialogue and the ever-present narration. Though he omits a number of the more ridiculous of Sheeran’s anecdotes (one can only imagine the reaction an audience would have had watching a digitally de-aged De Niro box a kangaroo at a circus), the writer does do a fantastic job of keeping these threads together and prevents the story’s sprawl from overwhelming the viewer. There are exquisite moments of absurdity laced throughout, including a discussion about fish that dominates the film’s most nerve-wracking and quietly intense scene that almost feels Tarantinoian in its application. Schoonmaker’s work is, once again, masterful, whether it’s her emphasis on the quiet moments in the middle of significant scenes or the way she cuts between two parties in the middle of a phone call, emphasizing both the listener and the speaker as active participants. The entire sequence in which Sheeran heads to Detroit to participate in Hoffa’s “disappearance” is established and made tense by her edit, and the rhythm she creates is genuinely brilliant.

If it seems like I’m focusing on the film’s final hour, in which Hoffa’s disappearance is explained, and Sheeran has to confront his body count, the havoc that it has wrecked on his family, and the slow death march towards the grave, it’s only because it’s one of the best of Scorsese’s long career. It’s the moment in which the director interrogates his specific fears of decline and death, a sort of anti-Hugo where his worst fears are concretely realized. That isn’t to say that the specter of mortality is absent from the rest of the film — Scorsese and Schoonmaker continuously emphasize how the various mob figures we meet throughout met their deaths in freeze-frames captioned with the hows and wheres — but it’s the moment where the universality of Sheeran’s condition overtakes the specificity of his story, though it is attached to his tale with good reason. Here sits a hobbled old man who took part in several of the last century’s greatest conspiracies, and was centrally involved in an event that has consumed more than one true crime aficionado’s life, and, by the very end, his nurse can’t even recognize Jimmy Hoffa, his silence no longer serving anything save his pride. And when we, and Scorsese, leave Sheeran, the final shot smartly alludes to that of John Ford’s The Searchers in very poignant ways, suggesting that the door will soon close on an entire generation and the things that it held so significant. I Heard You Paint Houses (or The Irishman) is a terrific and tragic epic about confronting the dying of the light in all of its ugly mundanity, rather than raging away against it.

*A note about the de-aging of De Niro: The reason Scorsese kept his touch light and merely reduced his wrinkles here is because the actor’s widened face more closely resembles Sheeran as a young man. It would be wrong for us to see the gaunt, fresh-faced De Niro here, and I’d say that his physical evolution is well managed by the effects team.