‘The Basketball Diaries’ at 25: A preview of great DiCaprio performances to come 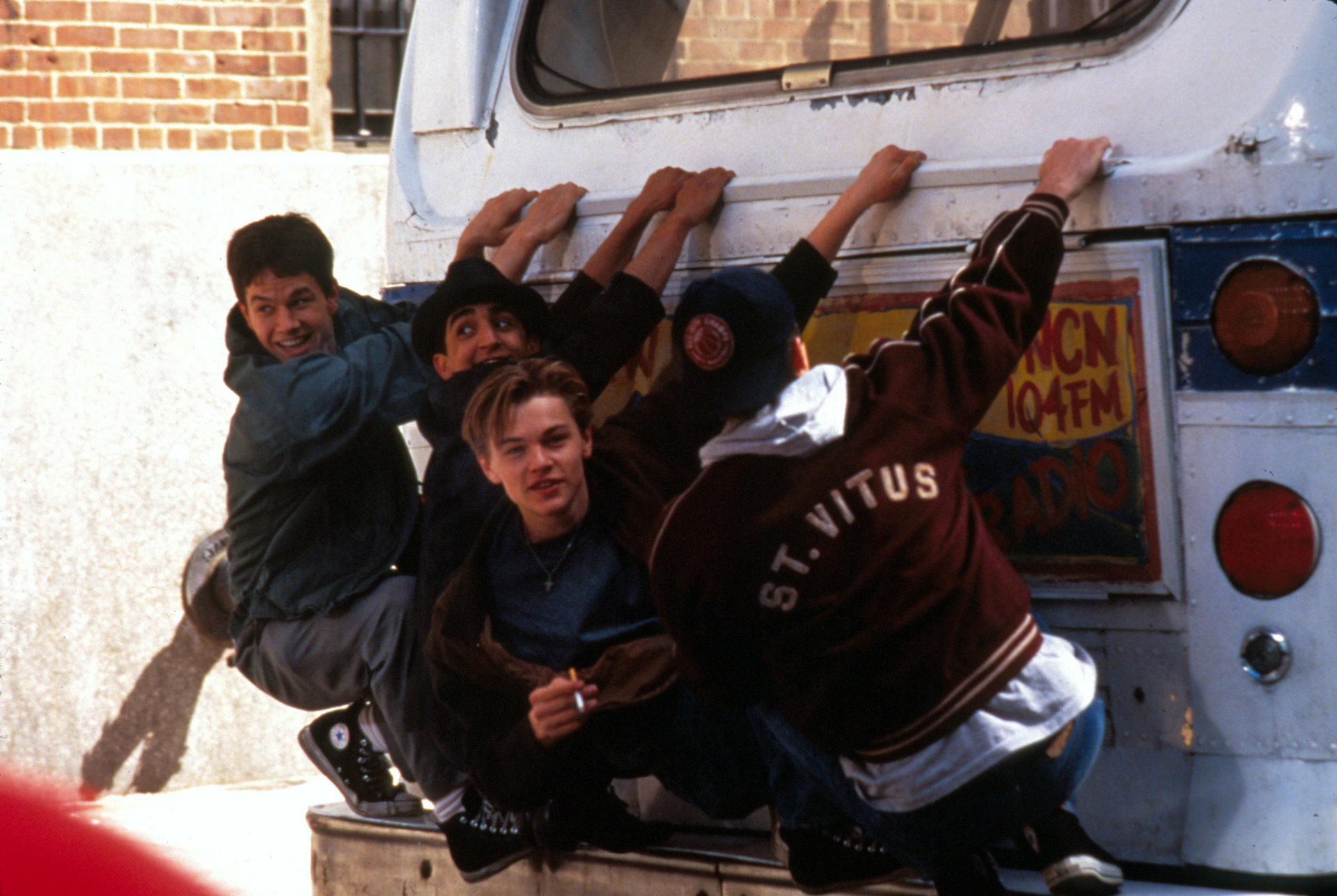 Still by MGM via MoviestillsDB

Editor’s Note: With a relative lack of new film releases due to the coronavirus pandemic, Vanyaland is taking a look back at some notable films on the anniversary of their release. For the full archive of this series, click here.

You can’t really find copies of Scott Kalvert’s The Basketball Diaries anywhere online anymore, and who really knows why that’s the case. Perhaps it’s due to a sequence in which young junkie Jim Carroll (Leonardo DiCaprio) fantasizes about shooting up his high school, clad in a leather trenchcoat and wielding a shotgun to the cheers of his friends, which landed the film in some amount of legal trouble after opportunist lawyers decided to start suing any and everything potentially related to the Columbine massacre (oddly enough, it would celebrate the fourth anniversary of its release the day after that horrible event). But Lindsay Anderson’s If… remains on the Criterion Channel, despite it ending with a similar anarchic fantasy, so that can’t be it. Perhaps it’s that time just passed The Basketball Diaries by, and since the DiCaprio mania of the late ’90s that elevated it to a certain cult status has faded away, it doesn’t just hold the same cachet anymore.

Based on Jim Carroll’s autobiographical book of the same name, The Basketball Diaries — released on this day 25 years ago, April 21, 1995 — dramatizes a young man’s struggle with heroin addiction, and how it devastated his life and his friends’ as well. Jim was once a promising Catholic League basketball star, along with his pals Mickey (Marky Mark), Pedro (James Madio) and Neutron (Patrick McGaw), who would raise hell together outside of practice and class, boozing and messing around New York together to the consternation of his mother (Lorraine Bracco). One night, Neutron takes Jim to hang out with a pair of twin sisters, and it’s there that he gets his first taste of dope. It makes him feel fantastic — though Kalvert simply dramatizes it as a shirtless DiCaprio running in a field of flowers — and he starts seeking it out more, taking bumps in the middle of practice and spreading it to his pals, especially after they’re all depressed following a close friend’s death. When copping some from a few bums in a squat, they tell him to just outright shoot instead, and he complies. He’s hooked.

Soon enough, he, Pedro and Mickey are kicked out of school for playing a basketball game while very obviously high (they couldn’t figure out what pills were the uppers, so they just guessed and took whatever they drew out of Pedro’s hat), and the pair turn to petty crime in order to get cash to score. Jim gets kicked out of his mother’s house because she can’t stand to see her son fall apart and the conflict that that entails, and things get pretty rough for the group. Jim bottoms out at one point after getting beaten up by a skinhead (Michael Rappaport, who is the least intimidating dude of all time) and a friend from the local blacktop basketball court, played by Ernie Hudson, takes him home to detox. Jim robs him blind and heads back on the street, where he eventually becomes an accomplice to murder, and his mom winds up calling the cops on him when he shows up to beg her for money. He’s taken to Rikers, where he detoxes and, after his release from jail, eventually begins performing his story for avant-garde theatergoers. As all addicts do, ultimately.

The Basketball Diaries fits right in the middle of the ’90s drug cinema, which arose in the aftermath of an entire decade of Reaganite “Just Say No” propaganda and an interesting perspective shift from the drug dealer that of the drug user (perhaps a result of blow and dope often being a stand-in for general capitalistic excess and exploitation, and the ’90s only began to examine its effects). There were the indies, the Drugstore Cowboys and Trainspottings, which were critically beloved for their style as well as their unconventional perspective, and there were mainstream studio films, of which The Basketball Diaries is a member, that weren’t. It received a decidedly chilly reception from critics at the time and flopped at the box office and, for the most part, faded into a cult obscurity following DiCaprio’s rise to mainstream prominence. One can imagine a teenager stumbling upon the film on a pay-cable channel and watching it thanks to Titanic‘s success and being, well, shocked by its content.

Of course, there’s the drug abuse, often glimpsed in graphic fashion, such as a scene where the actual Jim Carroll cooks up a shot for the kid playing his younger self, but its sexual frankness is kind of fascinating as well and significantly more interesting in its context. After a series of supporting roles, including an Oscar-nominated one in What’s Eating Gilbert Grape, DiCaprio was well on his way to becoming a leading man, as well as a genuine sex symbol, and this film only helped to cement it. His handsome looks — a beautiful face on top of an accessibly lanky frame — coupled with his confidence-oozing persona both of which are constantly undermined by his messy, snot-laden performance, which, to this day, remains one of the actor’s greatest attributes. His ability to debase himself in the name of honest, if somewhat exaggerated, emotion has been used by master directors left and right, from Scorsese to Tarantino to Inarritu, and The Basketball Diaries offered a preview of what was to come.

Adolescent hormone-driven sexuality defines practically every moment of the film’s first act, which takes the form of an earlier — if much more natural and appropriate — form of addiction. There’s an early scene where Jim jerks off nude on his roof while rhapsodizing about how great it feels to do so above all the unknowing people of his neighborhood, to say nothing of Jim taking his leukemia-ridden best friend (played by a barely recognizable Michael Imperioli) to a jerk-off booth to watch a striptease, a terrible idea that only seems to hasten his friend’s demise and increase his suffering, especially after the sex worker is disturbed by the wheelchair-bound kid’s appearance. Or the sexual abuse that he puts up with from his basketball coach (Bruno Kirby), whose nickname, “Swifty,” had to be changed from its original form in Carroll’s book to avoid a lawsuit from the man that the character was based on.

That, too, is corrupted by heroin, along with his friendships and dreams, though in this particular case, it’s done in a deeply troubling way, much as it often is in films about addiction. Jim’s rock-bottom, at least sexually, is when he starts turning tricks for well-paying johns in subway station bathrooms, where he hallucinates Swifty standing over him, watching him get a blowjob from a customer. The impact of the scene is weirdly diluted, too, as the emotional pay-off of the sequence — Jim’s chance encounter with a reformed sex worker and doper played by Juliette Lewis — comes before it in the film’s chronology. But there’s an insidiousness to it as well. Much like in Steve McQueen’s Shame (a much, much better film), the lowest you can get in your journey through the perils of addiction is letting a gay man perform oral sex on you in some sort of a public place, and, in Jim’s case, pay you for the privilege of doing so. And it’s there that the relative cartoonishness of Kalvert’s film starts to manifest itself, as well — the bathroom is well-stocked with stereotypes, including leather daddies and drag queens — and that scene is soon followed by the film’s climactic burst of violence when Marky Mark pushes a pusher off a roof for ripping him off.

Part of the feeling of cartoonishness, aside from the ’90s tendency to over-exaggerate and stylize certain things without any clear aesthetic goals or when just normal realism might have sufficed, is Kalvert’s attempt to update what is a very ’70s story without changing any of the details. The NYC of the ’90s was a very different place than it was some 20 years earlier, with most of the problems of that particular moment becoming somewhat hard to believe or rationalize, like when Jim and his friends rob an old-school soda fountain and candy store, somehow in the middle of a rough-and-tumble New York ‘hood as if they’d just walked on to the set of the diner from Back to the Future. And, honestly, for as much as The Basketball Diaries wants to claim that it’s a realistic portrayal of addiction, it might have done better to root it in its honest time-and-place and play Carroll’s story as straight-forward and as honest as they could. For all of its posturing, it’s still a Hollywood product, and it’s still held back by the same things that still keep addiction dramas from being reasonably successful in Hollywood today. It operates best as a preview of coming attractions — a series of DiCaprio leading roles that we’re still blessed with to this day — and doesn’t really hold up all of these years later.