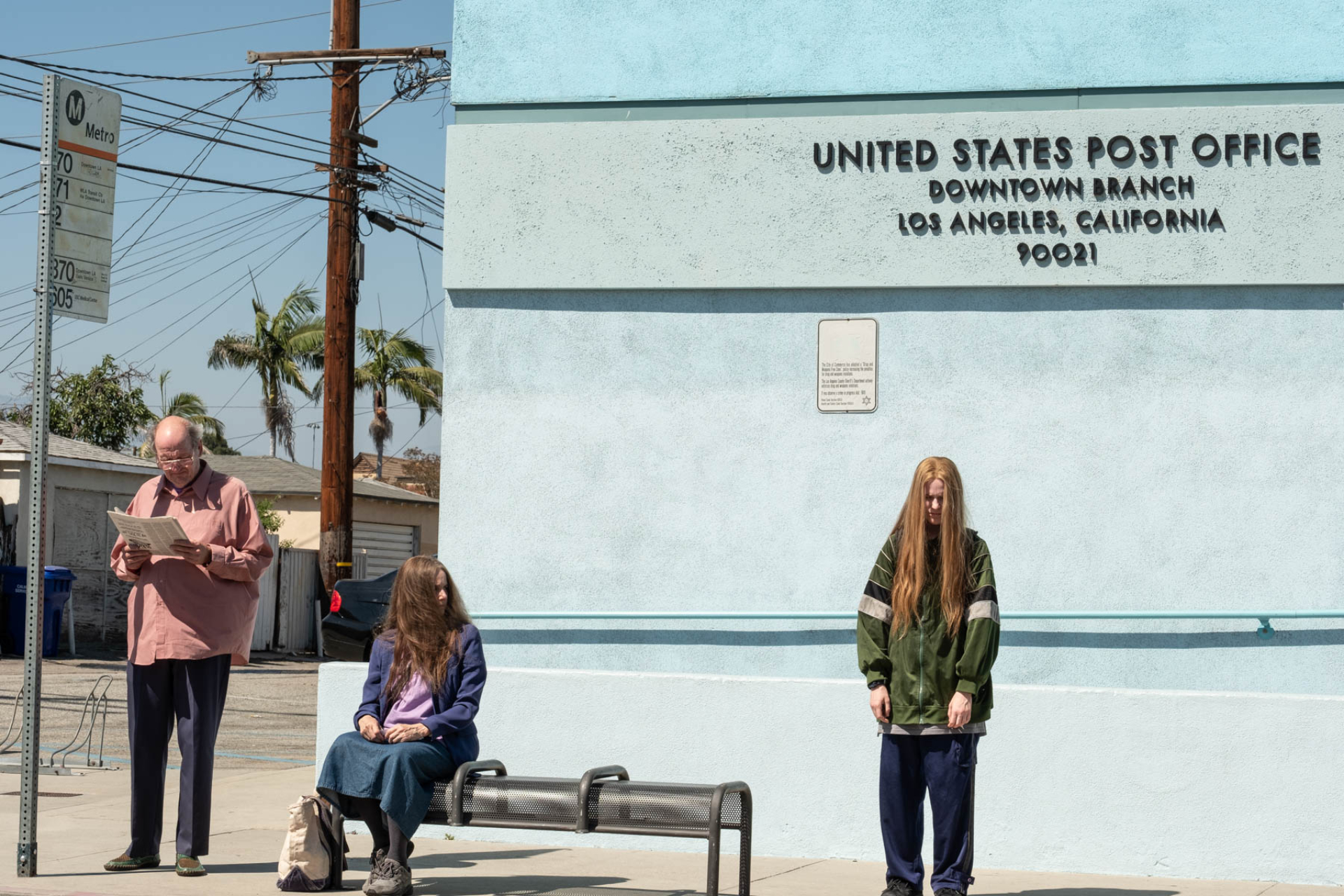 If this year’s Sundance had a lesson for returning filmmakers, it would have been this: Evolve or die. Those that did, such as Sean Durkin (whose fantastic feature The Nest I, unfortunately, won’t be reviewing), floated to new and spectacular planes, and those who didn’t… well, they made films like Wendy, and got pilloried for them by other critics (I have not seen Wendy, but the reaction to it has been interesting, to say the least). This brings us to the curious case of Miranda July, who both switched up her established formula of awkward twee comedy and attempted pathos and preserved it in amber. For the first 20 minutes of Kajillionaire, which I have repeatedly said as “Chamillionaire” for the last two weeks, it seems like July’s aesthetics may have aged poorly and will run thin, as her hyper-exaggerated stylistics feel a bit off and un-evolved. It’s been eight years since her last film, The Future, hit theaters, and since that tonal mismatch of style and drama either alienated its audience or delighted them, and it’s almost like she’d never left. But Kajillionaire surprised me with its depth of feeling and its refusal to rest on its aesthetic laurels, and I’d be lying if I said I haven’t been thinking about it every single day since I saw it at its press screening.

Kajillionaire marks a departure for July in one striking way: she’s not physically present in the film, having cast a traditional stable of actors instead of leading in the ensemble like she normally would. Instead, that duty falls upon the very capable shoulders of Evan Rachel Wood, who plays Old Dolio, our monotone protagonist, dressed up in Billie Eilish-style baggy sweats, long hair streaking down in front of her face like she’s Cousin It from The Addams Family. Old Dolio lives with her oddball parents Robert (Richard Jenkins) and Theresa (an unrecognizable Debra Winger) in an old office space next to a bubble factory, where giant masses of suds erupt from the walls on a daily basis, and the three of them make their living by doing small-time cons and thefts. They steal mail from lockboxes next to theirs, they steal watches and make Old Dolio return them for some sort of reward, and enter thousands of online contests in order to potentially win some sort of prize. She sees her parents as her partners, and the three have always split everything three ways, but it’s clear to anyone outside her little bubble just how painful and starved of affection and love that her childhood has been.

Everything changes when the trio win an all-expenses-paid trip to New York City, however, and they decide to redeem the prize for three round-trip tickets from L.A. to the Big Apple instead of using the prize as it was actually intended — as a mother-daughter getaway. Old Dolio comes up with a scheme involving their luggage getting “stolen” and then getting the insurance money from the airline, which should be enough to cover the rent they owe so that they can stay in their weird little home. On the plane, her father and mother meet Melanie (Gina Rodriguez), who is something totally rare in a Miranda July film: a reasonable facsimile of a real person. Having lived a pretty boring life, with an overprotective mother and a boring job selling eyeglasses to older people, Melanie decides to help out the clan on their cons. The neophyte con artist comes up with an idea to make a little money: Get older people, who have invited her home, to give her “priceless” antiques and then sell them at flea markets. At first, Old Dolio begins to resent Melanie, who takes over her place as “the daughter” of the group, and Melanie becomes somewhat horrified at how callous Theresa and Robert are to their victims. But the two form a weird and solid connection, and Melanie attempts to free Old Dolio from the nightmare situation that she’s grown up in.

July’s magical-realist aesthetics have never been stronger than they are in Kajillionaire — the bubbles, funnily enough, prove to be really interesting visually, seeping through the shitty walls and on to the floor — and, as such, her deeply empathetic storytelling manages to hit the notes that she wants better than ever before, and their dark denouncements have never felt more bitter. For Old Dolio, cruelty is the norm, and the cult-like lack of care that she’s been forced to endure over the course of her life is genuinely painful to experience, even in the briefest of moments, but unlike in dozens of other worse indie films, the twee trappings of her life give way to the true ugliness beneath all of it. Midway through the film, there’s a scene in which the con artists gather at the house of a dying man, whom Melanie needs to deliver glasses to, and the man asks them to make noise, to make it sound like his loved ones still live in the home. That way he can die peacefully, surrounded by some sort of family, even if it is ultimately a false one. July amps up the warmth of the scene until it is nearly amber-orange with feeling, with the mother and father taking on bizarre traditional roles, full of love and kindness, and Melanie plays a tune on the piano. Old Dolio doesn’t know how to process it, but she begins to discover that she likes what she’s been missing out on. And just as soon as it started, the moment ends, and the illusion is irrevocably shattered. It’s all tremendously sad, even when it’s being very twee and funny.

And, despite all that, the humor works incredibly well. Wood and Rodriguez seem like they’d be a weird pairing, and they are, in practice, with Rodriguez being essentially a normal young woman and Old Dolio being the kind of creation that only a writer-director like July could come up with, but there’s enough earned warmth between the two of them to make the third act mean something. Their scenes together are deeply amusing, as Rodriguez reacts naturally – but kindly – to every oddity that Wood tosses her way, culminating in a very funny moment where the two of them are trapped in a gas station bathroom during a small earthquake, which causes Wood to believe that the world is ending. Rodriguez’s kindness in the subsequent scenes and Wood’s joyful reaction to her survival are amongst the biggest laughs in the entire film, and I honestly hope the work more together in the future. And that’s the greatest strength of Kajillionaire: Even if it seems to be slight in practice, it’s still very smartly written and directed, viscerally painful emotionally even when it’s not intending to be so. It’s so good that I honestly want to revisit every one of July’s previous works and see if I was wrong or too emotionally unavailable to properly enjoy her filmography. And even if Kajillionaire represents a step forward for July and a strong start to what will be her third-decade making films, perhaps, all along, it was I that needed to do the evolving.