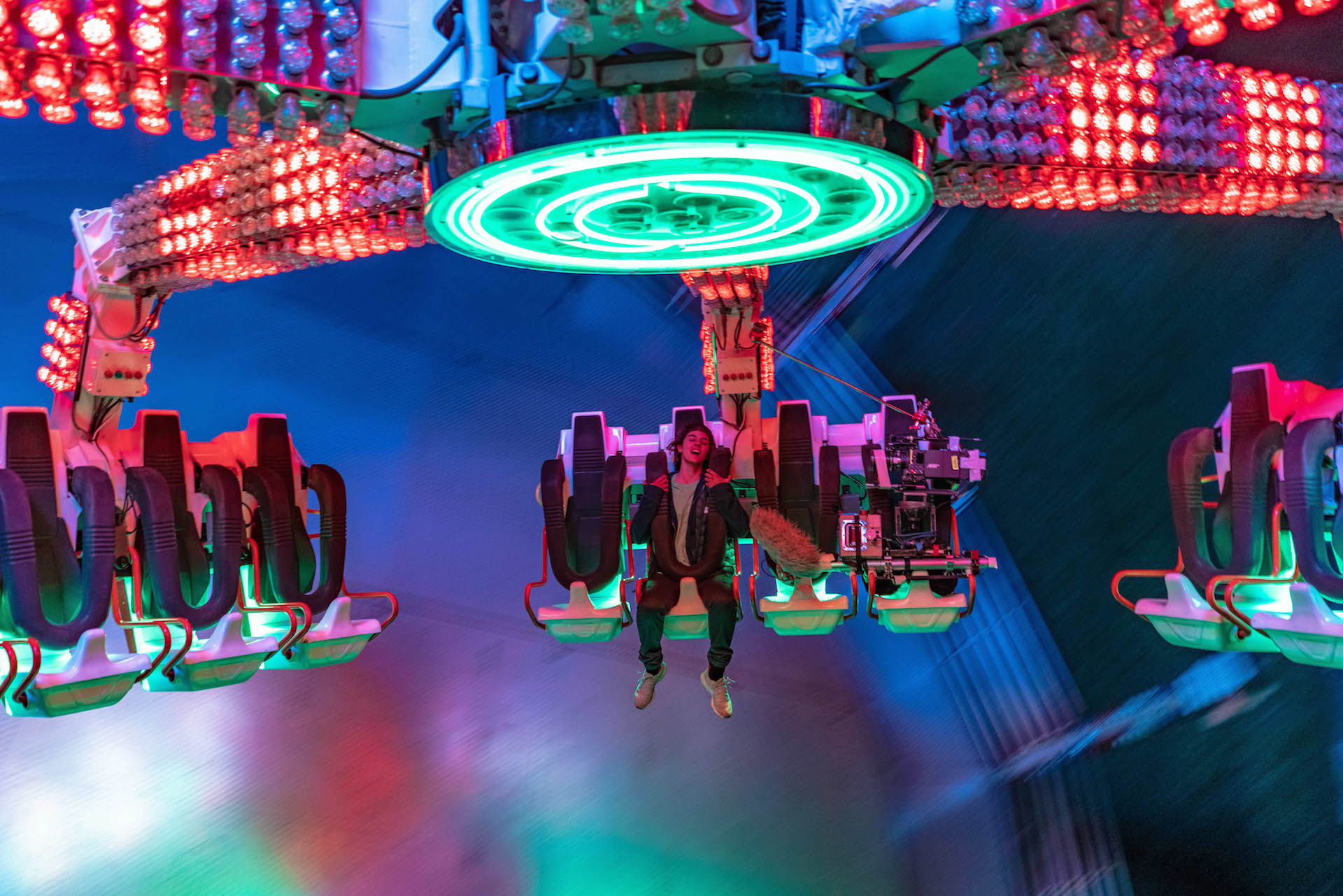 It’s always great and weird to see exactly what sexual stuff still has the capacity to shock and unnerve people in the Year of Our Lord Two Thousand and Twenty, a full two years after the Academy of Motion Picture Arts and Sciences gave its top award to a movie about a deaf woman who falls in love with a fish, but it’s nice to know that filmmakers like Zoe Wittock have continued to push the boundaries further and further. Her film, Jumbo, has already become known around Park City as “the movie where that girl fucks a Tilt-A-Whirl,” and however rightfully or wrongly that designation has been applied to it, I can tell you that, yes, inter-mechanical sexual relations happen in this film. But what you might not be expecting is how smartly and artfully Wittock has constructed her film, and aside from some end-of-film tonal floppery, Jumbo is a genuinely bizarre and wild little film that deserves more consideration beyond that one-sentence summation. Well, I’ll make my own joke here: It’s like Julie Ducournau directed Bumblebee, and, if you’re like me, that should be enough to get your ass through the theater door.

Based on any number of tales about people who have fallen in love with inanimate objects (I thought often of one infamous episode of My Strange Addiction, in which a man fell in love with his car and detailed for the TLC cameras just exactly how he had sex with it), Jumbo tells the story of Jeanne (Noemie Merlant, who does some fearless work here), a lonely and shy amusement park janitor who, in her spare time, builds wire reconstructions of the park’s rides. She lives with her mother Margarette (Emmanuelle Bercot), who responded to the trauma of Jeanne’s father leaving her by plunging head-first into hedonism. It’s clear that she loves her daughter, but she’s a little too frank with her on certain subjects — at one point, she claims she wishes she could have made her daughter with her vibrator instead of having met her former beau to her daughter while she’s taking her to work — and it only adds to Jeanne’s awkwardness. Her new boss, Marc (Bastion Bouillon), takes a liking to her, which freaks Jeanne out, even if she does return his affections somewhat. But one lonely night at the amusement park, Jeanne has a bizarre encounter with the new Tilt-a-Whirl ride that was just installed. She believes that she can communicate with it, and sure enough, she falls in love, which freaks every single person in her life the fuck out. And as Jeanne pursues this odd romance, she’ll come up against the people who just don’t understand her affections for this giant metal thing.

The first 80 minutes or so of Jumbo play out in an abstract, alienated way, but Wittock wisely leans on the Amblin playbook of awe to get her points across, far better than any of the Transformers films ever did even with the backing of the Beard. Jumbo communicates with Jeanne via his colored light, whose mood is enhanced by the the fog billowing out of one of machines, and Merlant’s wide-eyed gaze makes her astonishment feel believable. Perhaps it’s the fact that she’s, you know, talking to a real mechanical object as opposed to a tennis ball on a stick makes her work a little easier, but it’s still obviously very difficult to take such a strange expression of familiar emotion and make it, well, meaningful. It’s genuinely discomforting to watch the pair bond, and even odder to watch them fuck, which takes the form of a Jonathan Glazer-styled surrealist sequence, where a nude Jeanne, surrounded by white walls, is consumed by castor oil. It helps that everything is so beautifully shot by Thomas Buelens, who captures the exaggerated moments just as well as the “real” ones in between. This odd abstraction actually pairs nicely with the bitter drama of the film, where Jeanne’s mom struggles with her daughter’s attraction to this machine and her own feelings of inadequacy, and honestly, I was glad that it didn’t take the indie comedy route (Lars and the Wheel Girl, anyone?) of just making these emotions into fodder for our mockery.

Yet, Wittock overplays her hand somewhat in the final act, where the film makes a head-on and awkward shift into twee territory that the rest of the film doesn’t really support: A happy ending, somewhat, grafted on to a story which aimed for something more complicated initially. Perhaps Wittock might have settled on a specific tone if she wanted those moments of glory near the end, but, as it stands, it feels genuinely uneven. It’s not enough to spoil the cake, but it definitely doesn’t rise as high as it should, nor is it as moist and rich as one might have thought having glimpsed it in the oven. Still, Jumbo is a wild and tremendously empathetic film, and it’s a pleasure to watch it unfold even if it doesn’t end up in the best place. It’s genuinely amusing and somewhat shocking, and like Jeanne riding around on her Tilt-A-Whirl lover, I feel genuinely sated by it. Well, maybe not in the exact same way, but you get what I mean.