40 Rack: One Night Band sets the stage for a cohesive music scene 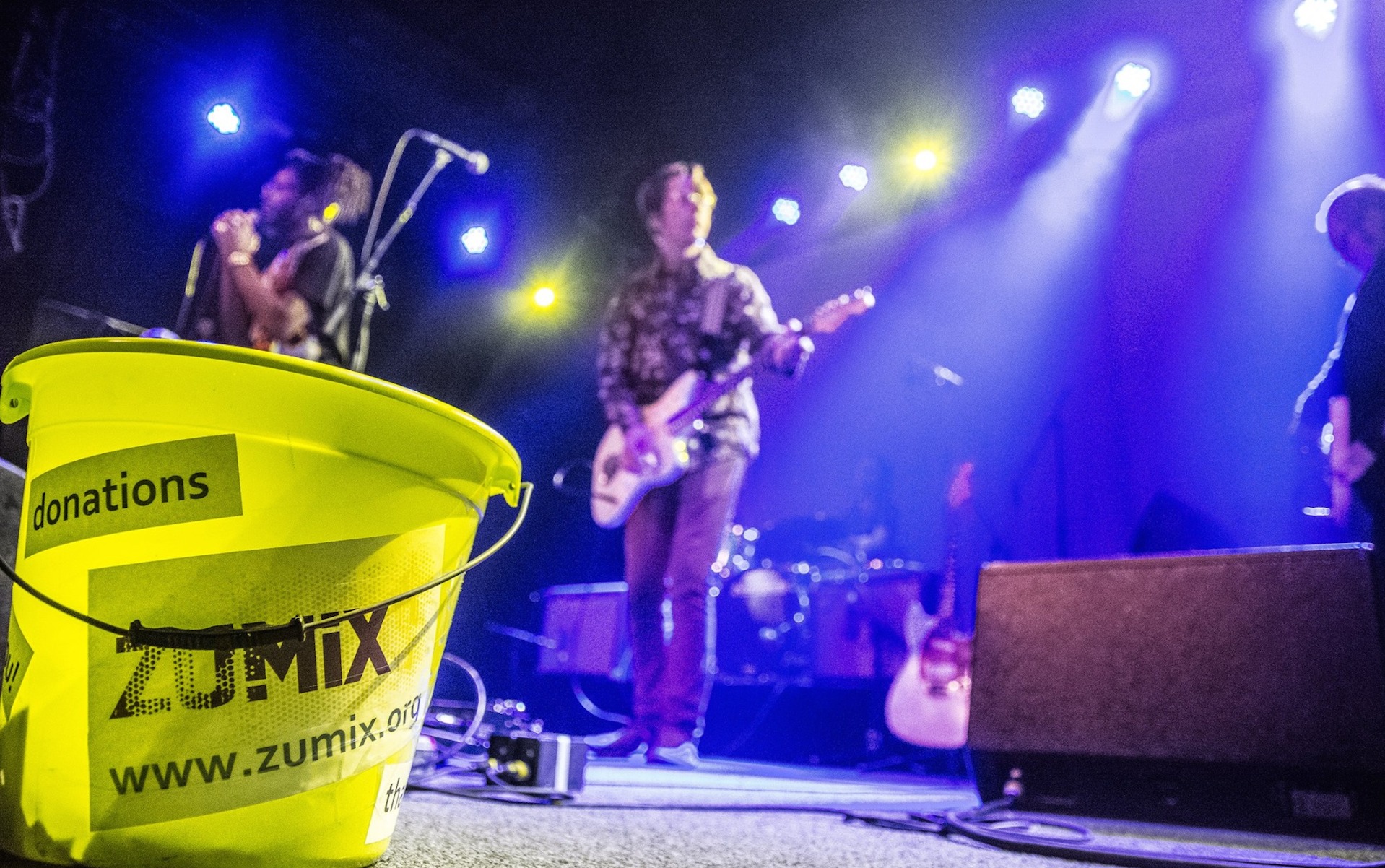 Our city’s annual One Night Band is a remarkable thing, even if, by now, we’re all familiar with its basic premise. But its process — 40 musicians come together to be randomly placed into eight new bands on a Saturday morning, each band writes new music and learns a cover, and then performs those songs on stage later that night — remains intriguing long after any sort of novelty wears off.

With a fresh crop of new participants, each year has its own sonic identity, and no one really knows just how the night will unfold until it actually happens. And that’s just part of its enduring appeal. As One Night Band readies its 2020 edition, this Saturday (January 11) at The Sinclair in Cambridge, organizer Richard Bouchard still beams over how the collaborative night, resurrected in 2018 after a few dormant years, reflects the Boston music scene as a whole.

“I think it really brings people together,” says Bouchard. “A lot of people tell me that it’s their favorite music night of the year and thank me for introducing them to performers that they might not have ever seen otherwise, and that means a lot to me personally because I love attention, but I really do think it’s important for the scene at large. I’ve often talked about how there’s not a singular Boston music scene, there are a million little scenes that overlap with each other, and as we see venues closing and hear complaints about the rock scene dying or not measuring up to what it once was, I think the impact One Night Band has had is to highlight that there are plenty of exciting musicians coming up.”

This year’s edition features a nice mix of new faces and scene veterans, and as Bouchard ensures, it draws from and spans a diverse field of genres, styles, and scene circles. Included in this year’s crop of performers are VQnCR, Salem Wolves’ Gray Bouchard, D-Tension, Worshipper’s Alejandro Necochea, Marcella Cruz, Brandie Blaze (who still has people talking about her Boston Music Awards appearance last month), Corin Ashley, Jazzmyn Red, Tai Heatley Rondeau and a bunch of others. For the full list, scroll to the bottom of this post.

A few days ago, we hit up Bouchard to get the scoop on this year’s One Night Band, and his responses were so thorough and entertaining, we decided to just run the rest of this article as a Q&A.

Michael Marotta: I wanted to ask about what’s new for 2020. So, who are the new players? Are all the participants new to One Night Band?

Richard Bouchard: All new, all the time. There are so many great musicians around Boston that letting people double up and go again really doesn’t work. More than a few have asked, which makes sense because it’s such a fun and challenging thing to do, but I think it’s important to limit it to artists who haven’t participated before. I also worry about what the dynamic of a band with a person who’s done it before would look like.

Part of the challenge is working together to figure out how the band is going to come together and where they’re going to start, and if I always wonder if I drop in someone who’s done it before, will they bust through the wall like Kool Aid man, explaining “Ok, this is how we did it before, I know what works best, blah blah blah.” I think it’s important that this is a new experience for everyone.

How would you say One Night Band has evolved since its first event back in 2009?

The first one seems like a lifetime ago. The early versions with Boston Band Crush were maybe a little pluckier. More rag-tag. The most obvious evolution is in the diversity of artists, and I think that’s been game changing. For the first couple in ’09 and ’10, I think the main focus was “Can we make this happen?” So you just try to get 40 people to agree to do it and then you try to make sure it doesn’t fall apart, and those events were great and fun and brought the rock community together, but when I rebooted it in 2018 and went back and looked at the pictures and video from those early years, it was sort of surprising how caucasian and indie rock it was.

That wasn’t on purpose, it’s just sort of how it shook out, and looking back I feel bad that we weren’t more mindful early on. So now the goal is to make sure we’ve got good representation. The focus isn’t on “Can we make this happen?” anymore because we know that we can, so now the focus is on making sure that when it does happen we’ve got as much diversity as possible on stage. A less obvious evolution is the change in venues. For the first few years, we’d meet at The Middle East in the morning so they could get their band assignments, and then send the musicians to different practice spaces all over the city. If you’ve never been in The Middle East at 9:30 a.m. on a Saturday, I can tell you it’s not pretty — we’d typically be there before the cleaners so there would still be bottles and plastic cups everywhere, floors still sticky from spilled drinks, hopefully someone would be there to turn on the lights, and so on.

Now we’re at a Berklee facility in the morning so everyone can write and rehearse in one building, and then we’re at The Sinclair for the show. They’ve got people helping with load-in, the green rooms and backstage are sparkling, the restaurant feeds everyone, it’s just a much better experience all around.

How would you say One Night Band has impacted the Boston music scene?

I think it really brings people together. A lot of people tell me that it’s their favorite music night of the year and thank me for introducing them to performers that they might not have ever seen otherwise, and that means a lot to me personally because I love attention, but I really do think it’s important for the scene at large. I’ve often talked about how there’s not a singular Boston music scene, there are a million little scenes that overlap with each other, and as we see venues closing and hear complaints about the rock scene dying or not measuring up to what it once was I think the impact One Night Band has had is to highlight that there are plenty of exciting musicians coming up.

Boston hip-hop is ascendant right now and is extending its reach beyond the city, there are weird noise bands doing crazy things in basements, church musicians that the traditional Boston rock scene has never heard, and on and on. They’re out there, they just might not be in the places we’re used to being. I think One Night Band helps the community by rejecting the idea that the scene is dying and showcasing that despite gentrification and hardship, music is thriving in Boston.

Proceeds from One Night Band go to benefit Zumix. How has the charity component changed or evolved since launch?

One Night Band will always and forever be a benefit for Zumix in East Boston. Their mission to empower youth in Boston through music is so simple and pure that it should be a no brainer, but they have to scrape and beg for every dollar that comes in. Music education improves lives, there’s no denying that, and having become more involved with them over the years through this event I’ve seen the good that they do with my own eyes.

They’re not just giving voice or instrument lessons, they’re teaching kids about production, songwriting, radio DJing, stuff like that, and they’re teaching them that their work has value. One of the things I love about them is that they help the students get paying gigs early on so that they learn that their talent has value. They are an amazing organization, and I’ll keep doing this event for them for as long as I can.

Have any permanent bands formed out of this night?

As the organizer of this event, whats the most exciting part of the entire thing? And what’s the most nerve-wracking?

Since moving the event from the summer to January, my one constant fear is that we’re going to have a Blizzard of ’78 situation and get cancelled. I now worry about snow in the summer when I first start planning the lineup, right up until we’re all in the building on the day of. It’s the one part I can’t control, so until I figure that out it’s gonna be the most nerve-wracking part. We’ve been really lucky, though. The weather this year looks positively delightful, so I’m starting to relax.