﻿Interview: Craig Ferguson goes against the grain with ‘Hobo Fabulous’ 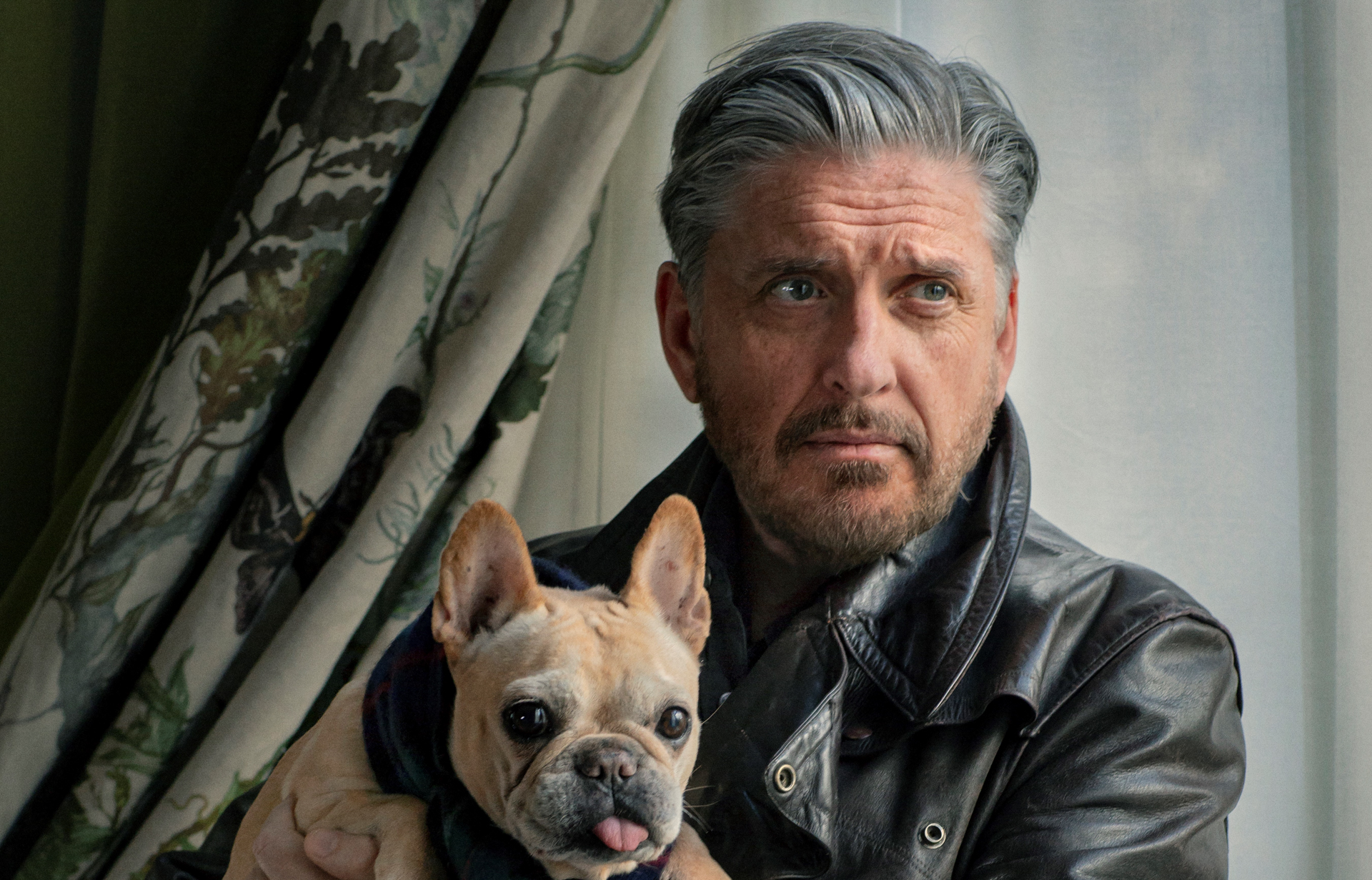 Craig Ferguson has always been in a league of his own, in terms of creative freedom, and his newest project is a fabulous example of that.

Dropping today (November 12) through the Comedy Dynamics Network, Hobo Fabulous — a six-part miniseries that falls smack dab in between MTV rockumentary and a stand-up special — showcases the former Late Late Show host’s newest batch of material in a whole new way, while simultaneously offering a glimpse into his life both at home and on the road during his most recent 50-date nationwide stand-up tour.

Vanyaland recently caught up with Ferguson to chat about the inspiration behind his new approach, touring like a rock star, and how actively straying away from political material and hateful rhetoric helped him to be a stronger comic as the show evolved.

Jason Greenough: Let’s dive right in, and talk about the most obvious thing first. You’ve got Hobo Fabulous, a new six-part special-slash-documentary coming out on November 12. How are you feeling about the final product leading up to the premiere?

Craig Ferguson: I feel pretty good about it. Once you make something, it’s out of your hands, really, and it belongs to the audience, but what I felt was that when you go and see live comedy, it’s a much more immediate and intimate thing than it ever is in a stand-up special. A special can lack that intimacy a live performance can give, no matter how good it is.

I know other people have been experimenting with the genre, as well, but what I was trying to do with this special was to try and create a sense of intimacy for the television viewer that wasn’t there for the theatre audience. The audience at the theaters didn’t get to see all the backstage stuff, and me on the tour bus, or in my house, but the TV audience got that, so it’s like, what you lose by watching it on TV you gain by watching it at the theater, and vice versa. That was I really wanted to do. Replacing one sense of intimacy for another was the experiment.

It would be hard for me to say, because I would be judging it myself, but I feel like we got close to it, in that sense.

Absolutely. I feel like even with the stand-up special aspect, the more intimate you got in the documentary aspect of it, that sort of helped to make your material on stage even more relatable, in a way. It seems like it adds another layer of significance to the whole thing.

I think so, too. That was kind of the idea. What kicked off the idea for me was that I watched documentaries about bands like Journey, and Rush, and Anvil, and while those bands aren’t bands that I’m particularly into in any way, shape or form, as I watched the documentaries about these bands, it had me feeling like “I get it now.”

I was understanding how the fans of those bands got it, and I thought it would be a good way for me to make some TV for people who hate my guts. It kind of pulls you in, in a different way than just a performance, and I kind of like that.

Some specials are great. Whenever I see Dave Chappelle do a special, it’s awesome, but with my special, I couldn’t think of doing another one with a half dozen cameras in a theater with cutaways to the crowd and everything, so even with the way we shot the stand-up for this, we shot it basically with only two cameras, just so we would get that same feeling that it would be intimate and it would feel like you’re a part of it.

You mention it a few times in the early episodes of the series about how you never wanted to shoot another special because they’re so overdone, and in turn, you’ve sort set a new precedent yourself for the potential of a new comedy special format. Where did the idea come from? Was there an “ah-ha” moment while trying to figure out what to do next with your stand-up, or did it develop over time after watching those Journey and Rush documentaries?

It came from watching those documentaries, but I also work a little bit differently compared to most stand-ups. Some stand-ups work like me, but most of them do shows Thursday, Friday, and Saturday, then go home. I don’t work like that. I go out on a bus, and I tour like a band. I do every night of the week for three weeks, then I go home and take a break, then I go back out again. It’s much more like the musician’s model of touring, and I felt like that would lend itself to the format a little better because of the way I do it. If you saw me go out on a Thursday and come back on a Saturday, I don’t know how successful that would’ve been, but because I tour in that sort of old-fashioned way, that’s what made me think that the ‘rockumentary’ model would work better for this.

My first thought for this was to do just one special with all of these elements, and then I thought about how when I watch stand-up, I can’t watch it all in one sitting. I watch maybe ten to fifteen minutes, then I stop and go and do something else, then I come back to it. So I wanted to break the whole thing down into episodic sizes. I mean, if you want to watch the whole thing at once, you can, or you can watch the way I would, which is in pieces.

Where a special is usually recorded in one place, over the course of maybe two nights, this is leaps and bounds beyond that. You had Joe [Bolter] recording every night, in every city — did that ever add pressure onto the shows? Like, where you felt you had to be “on” for every show? Or, did the fact that you had a camera on you every night for almost ten years help with that aspect?

You pretty much hit the nail on the head. Because I had done late-night for so long, and that’s an hour a day, five days a week for ten years, you get very blaseé about it. I don’t experience any sort of nervous reaction to cameras the way that I used to before I started late-night. It just doesn’t register. I go and do my thing every night, whether I’m in a small town I’ve never been to on a week night, or I’m at Radio City Music Hall on a Saturday, I’ll come at it the same way. A show is a show, and it’s gotta be done right.

In the series, you touch on “PC culture” and needing to be “appropriately inappropriate” pretty often. Looking back on the Hobo Fabulous tour, was it tough to find that balance of knowing what was funny without pandering, and just going for the jugular on certain things?

The thing to remember about how things are a bit more volatile than they used to be, in the sense of people’s reactions, I actually think that’s a good thing. I don’t think it’s bad for comedy. It makes you work harder. It helps you figure out how to tell the joke you want to tell and say the thing you want to say without being lazy about it. I think one thing that’s good about PC culture, for lack of a better term is that it makes comedians work harder, and also people speaking up when they’re offended is good. All they’re doing is using the same system as the comedian themselves, in that they’re saying ‘hey, this is what I think,’ and I don’t have a problem with that.

I don’t think I have a lot of hateful rhetoric inside me anyway, but the only rule I set for myself before ‘Hobo Fabulous’ was trying to see if Joe and I, as writers, could write an entire hour of comedy that doesn’t contain the word ‘Trump,’ and we did it. It was an interesting exercise, because all I wanted to use that as was a technical exercise, but what it did do was force the show into a very anecdotal and personal form of stand-up. The show became about things like losing my virginity, all the times I’ve fucked up, and the time I nearly drowned to death on Long Island. It all became very personal over time, and I liked that.

Right on! I agree with you there, that it makes comics work a bit harder, and I feel like that pressure, more often than not, brings out the best in the material.

I’ve made insensitive jokes in the past. I’m not going to deny that. But I think about it, and I always have. It’s not hugely different right now, for me at least, than it ever was before.

Another thing that caught my attention early on in the series was how you talk about being in a separate category from other comedians and entertainers. Has that sort of isolation helped you evolve as a comic in any noticeable way? In other words, does that separation help you evolve your own voice, as opposed to falling into the category of a “late-night comedian”?

I was forced out the situation, and I’ll be honest with you. I think it would’ve been nicer to go to this college and make this joke about the playoffs, and this joke about politics, and it would be easier. It is what it is. I sometimes wish I  was part of it, but ultimately, I’m never going to be, so it really is what it is. I think for all comics and all writers, that’s a place you to need to get to sooner or later anyway. You need to find what is authentically you and leave the rest behind.

Above everything, what are you hoping viewers get out of this series?

I hope they enjoy it, and I hope they find it entertaining. If they don’t, that’s okay, and if they do, that’s great. Once everything is done with a show like this, it’s very strange because I have no control over it anymore. It’s finished. Whatever people make of it, they make of it. I’ve made a lot of stuff that people have liked and there’s been a lot that people haven’t liked, and I totally agree with them.