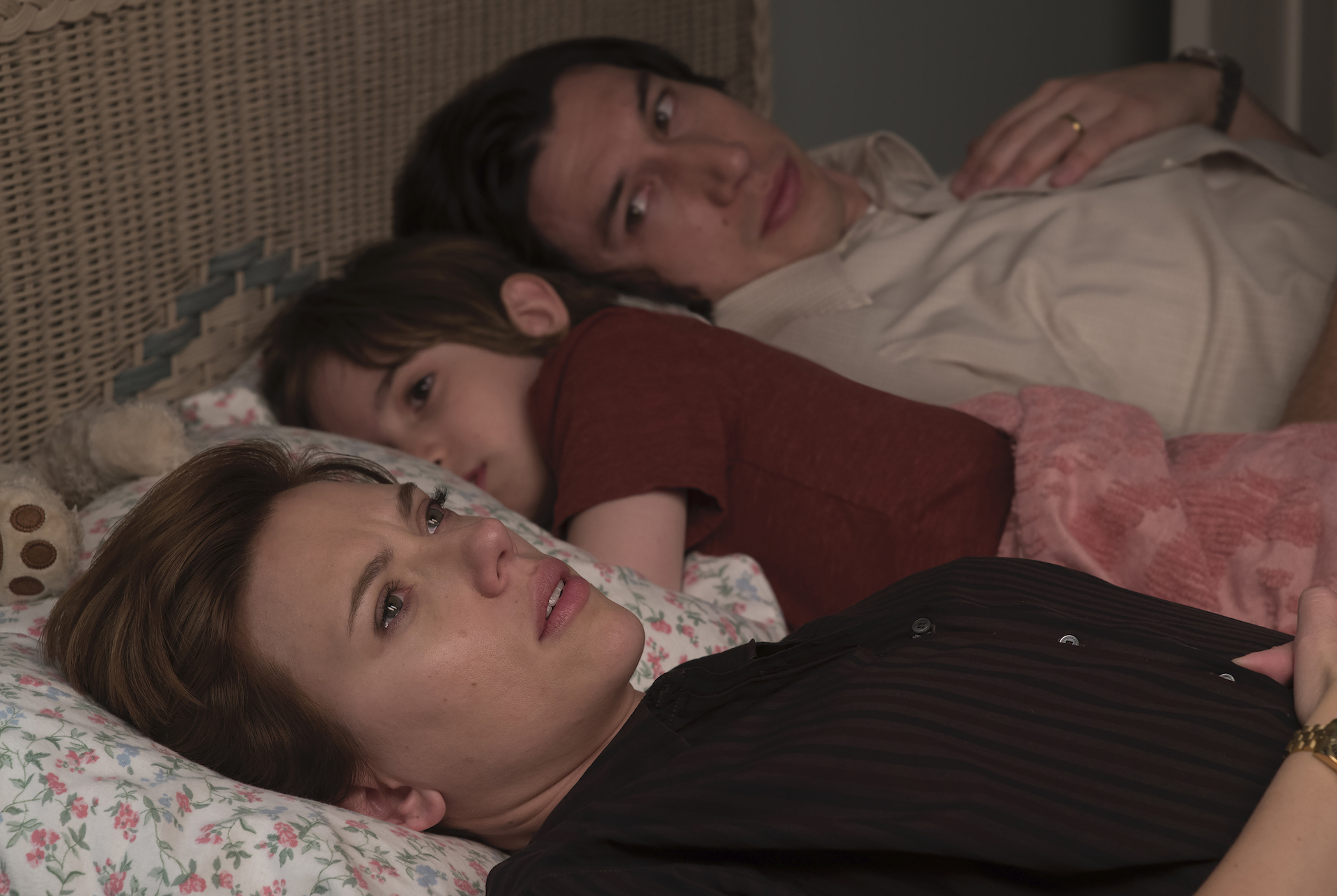 It should go without saying that Adam Driver and Scarlett Johansson are among the best actors of this current generation — though that can occasionally be obscured by the sheer enormity of their franchise commitments — and Noah Baumbach’s latest film, the divorce dramedy Marriage Story, provides them with some of the deepest and strongest material of their careers. As Nicole (Johansson) and Charlie (Driver), a well-meaning and reasonably nice young couple who have decided, after years of frustration and strife, to split up, and are tossed into the meat grinder that is the Byzantine divorce process, both actors find moments of true honesty and beauty in their characters’ predicaments. Their psychologies make total sense: Nicole wants to return to her life as a LA-based screen actor following a lengthy stint with her husband’s avant-garde theater company (though that’s masking an insecurity about Charlie’s infidelity); Charlie just wants the process to be simple, as he doesn’t totally understand why it’s happening, and for it to spare his self-made theatrical company from disaster. Both want their young son to be spared of the ugly reality of divorce. The former is able to showcase her character’s wanderlust, offset by her self-effacing kindness, and the latter is able to weather the storm until, in a fit of pent-up frustration and sadness, he explodes into grief. It is surely the kind of work that would make awards-giving organizations stand up and pay attention, and with good reason.

I’ll be perfectly honest with you, though: there’s something missing from Marriage Story, and I don’t quite know what put me off of it.

I was initially bothered by how quickly Baumbach shunts Johansson’s character off after a brief monologue at around the film’s half-hour mark, when she explains her reasoning for leaving Driver’s character. He then positions her behind her lawyer, who, as played by Laura Dern, whose silver-tongued messages of acceptance and positivity (coupled with her nastiness in her execution of her duties) seems to be regarded by the director with a complete and utter skepticism. That’s true even when she’s dropping knowledge bombs about how a Family Court judge cannot stand the concept of a less-than-perfect-mother, or encouraging her client to express her self emotionally in this process. He’s far more interested in Driver’s foibles as an awkward, sad dad trying to understand the new world that he’s found himself in, and that’s a bit of a double-edged sword for the film. It handicaps Johansson’s solid work here, and isolates her in her own little world of family and friends, but it gives the film its best moments, when, as presented from the husband’s perspective we get to explore the awful experience of divorce as a functional process, in all of its Kafkaesque absurdity, and how it pits people against each other.

That absurdity goes a long way to making this film both bitterly funny and painful to watch, with all of its arcane yet necessary rules inflicting countless stabs of mental anguish on (specifically) Driver. A common criticism of Baumbach and some of his contemporaries is how their the characters in their films exist in a privileged bubble, and though that’s true of our leads in Marriage Story, the director at least has begun to acknowledge that other people — of different social strata, or whatnot — exist in the world that they live in, and the reminders that we often get that the very things hurting this particular upper-crust undertaking are protecting those less fortunate. A whole lot of this information is given to us (and the character) by an anodyne lawyer played by Alan Alda, though it’s often presented in a maddening way: instructing the man to prepare for court while constantly emphasizing to him that he doesn’t think he’ll have to go in the first place. And there are legitimate moments of cruelty by both parties in this film, especially during the film’s sole courtroom scene, where Dern and Driver’s second lawyer (played with a hyper-aggressive masculinity by Ray Liotta) trade barbs so vicious that it shocks both their clients and the unprepared audience.

We’re often left to see these developments exclusively through Driver’s eyes, and we’re mainly shown his suffering (as opposed to Johansson, whose post-marriage sexual awakenings are quick gags in Marriage Story): having to take his tired frustrated son out on Halloween night after he’s spent the day with his mom, having to struggle to find a suitable lawyer, breaking down in the midst of the proceedings during a sidebar with Alda. It’s to the actor’s credit that this parade of tragedy lands, for the most part, and never once approaches the kind of grievance-filled litany that you’d find on the darker parts of Reddit, though part of me wonders what this film would look like if it were simply told from his perspective alone. Perhaps it would be tighter, and lose a bit of its sprawl (and, clocking in at 140 minutes, it is as oversized as it is ambitious), though that’s nearly inherent to the format that Baumbach is chasing here — it’s easy to forget that Bergman’s Scenes from a Marriage (alluded to in-film via a New Yorker article framed on the couple’s wall) ran over 200 minutes on Swedish television. Conversely, another part of me wonders if the director erred in making this solely a feature film, and given that it was a Netflix production, it seems more than likely that the proposition was on the table at some point.

If I seem frustrated by Marriage Story, it’s because it’s merely a very solid movie as opposed to a great one, containing fits and spurts of the gloriously empathetic and stylish filmmaker that Baumbach has become over his lengthy career (Frances Ha remains one of the best films released in the ‘10s, full-stop, and the style here is most limited to a few particular moments of the sublime: Driver’s costume during the finale, an Altman-esque tracking shot on a studio backlot early on). This particular subject may have made him unable to reconcile the personal and professional in a way that made artistic and thematic sense, as the film, in practice, says it wants to do one thing and then ultimately does another (it is also fascinating to contrast this with The Squid and the Whale, especially given the evolution of Baumbach’s perspective in his autobiographical material). But those select character issues and the film’s occasionally unwieldy nature keep it from totally landing in the way that the director intends, and ultimately, it just becomes a showcase for the brilliant work of its two leads more than anything else. To see Driver and Johansson do career-best work is justification enough to recommend it, and I’m very glad that those who have found beauty in their breakdowns have witnessed something that resonated with them.