At Royale, The New Pornographers have more hooks than a bait shop 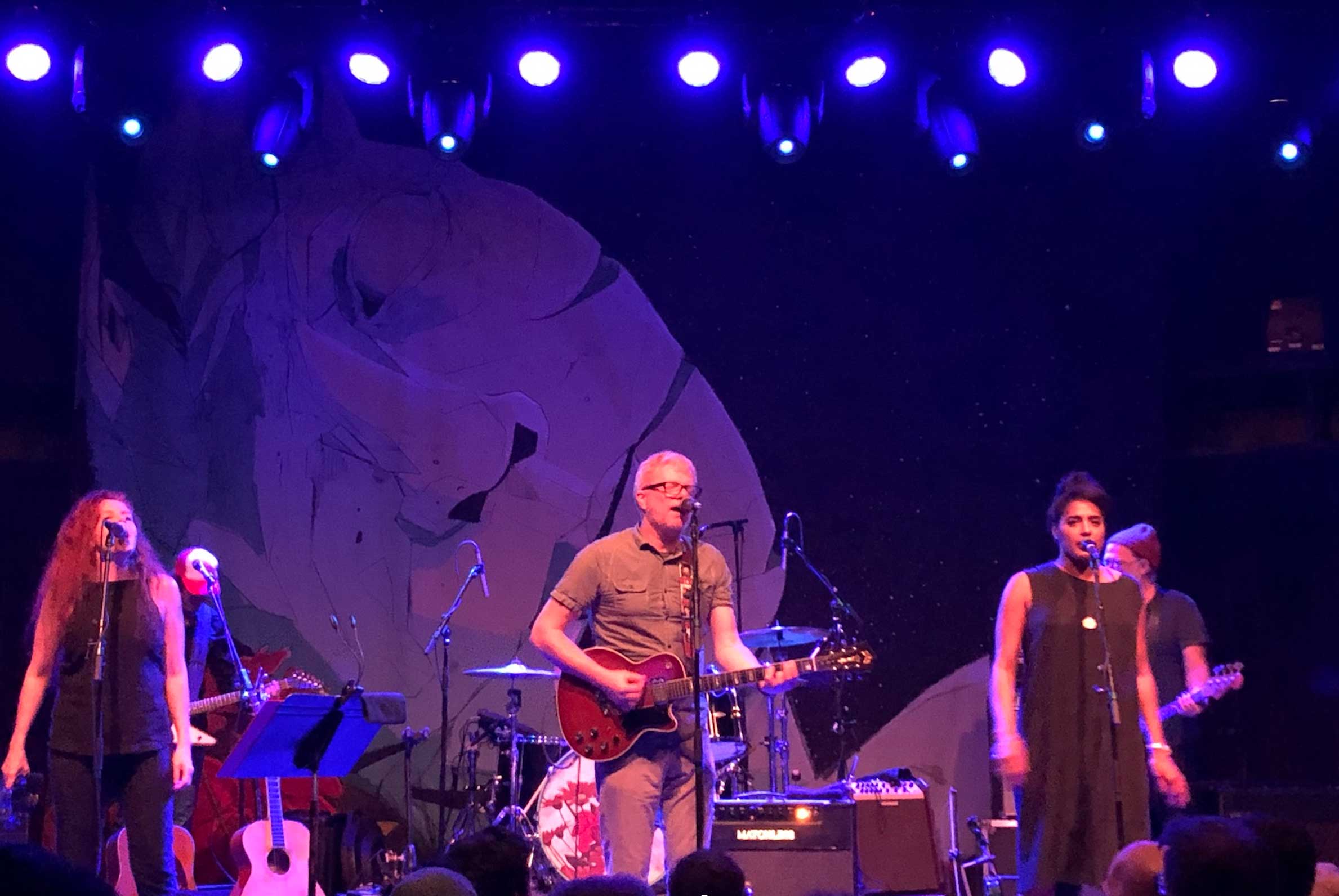 The New Pornographers have spent the past two decades embodying the platonic ideal for a certain type of indie rock band: Maddeningly catchy and buzzing with adolescent romanticism, this was music made by and for an insular community with more records in their collections than sense in their heads. That version of indie rock peaked in popularity in the 2000s, but The New Pornographers have remained admirably dedicated to their vision, returning every few years with a subtle new twist on their classic formula of power-pop hooks welded to earnest yet oblique lyricism. Monday night at the Royale (November 4), they covered as much of their discography as curfew would allow, indulging in an almost two-hour sugar binge.

Lady Lamb (aka Maine native Aly Spaltro) leaned into bright-sounding, synth-accented indie-pop on her new album Even in the Tremor, and her spirited take on this material made for a highly enjoyable opening set. As a singer, Spaltro had personality to spare, whether breathlessly sprinting through one of her syllable-dense verses, or slowing things down for the achingly sincere ballad “Emily.” Her three-piece band proved versatile enough to rock out, sway in waltz time, or just lay back and let Spaltro do her singer-songwriter thing (sometimes all within the same song), while adding fun flourishes like the slightly out-of-sync backing vocals on “Even in the Tremor.” Spaltro saved her most thrilling performances, though, for a pair of songs from the first two Lady Lamb albums: the snarling-then-dreamy-then-snarling-again “Bird Balloons” and the tensely simmering trip-hop of “Spat Out Spit.”

Given the busy schedules of everyone involved, there’s no telling who exactly will show up for a New Pornographers concert, but the eight-piece band that took the stage Monday night was as complete a lineup as one could hope for. Dan Bejar left the group in 2017 to focus on Destroyer, but Neko Case was present and accounted for, shaking a tambourine and joining in three-part harmony with violinist Simi Stone and keyboardist Kathryn Calder. Carl Newman may be the band’s de facto frontman, but the 24-song setlist split lead-singing duties between him and Case pretty evenly, the former’s steady, un-showy vocals nicely complementing the latter’s high, heartfelt melodies. The duo seemed to also be perfect foils personality-wise; as Case reprimanded several audience members for taking flash photos, Newman tried to diffuse the tension with jokes and anecdotes, leading to some amusing between-song squabbling (Case to Newman: “Don’t mock my legitimate beefs!” Newman to audience, pointing at Stone: “We didn’t want to talk – she was tuning!”).

Giggly interludes aside, the band played with predictably machine-like precision, switching from the arena-synth bombast of Brill Bruisers and Whiteout Conditions to the pop-rock economy of their early-2000s records as needed. In the Morse Code of Brake Lights, this year’s very strong addition to the New Pornographers canon, splits the difference between those two approaches, and the euphoric rush of “You’ll Need a New Backseat Driver” and “Falling Down the Stairs of Your Smile” held their own with the time-tested likes of “Sing Me Spanish Techno” and the sublime “Crash Years.” Though they spent most of the night zipping from one uptempo hook-athon to the next, the group also wasn’t averse to slowing things down for a ballad, with Stone’s sweeping violin lines lending a baroque-pop flavor to “Leather on the Seat” and the “hey-la” refrain of “The Bleeding Heart Show” turning into a full-throated sing-along.

Though the band never lost a step and every single song they played had a memorable melody, the set still lulled in parts. Maybe prolonged exposure to The New Pornographers’ maximalist, wall-of-sound approach inevitably induces some exhaustion. Maybe a two-hour rock show needs lulls just as much as it needs peaks – after all, if every second of the concert was as exciting as, say, the main set-closing “Mass Romantic,” there would have been heart attacks. Regardless, they finished strong with the encore, which culminated in “Letter from the Occupant,” a song so catchy that even when the dementia has taken hold and I have forgotten my own name, Neko Case will still be bouncing around my brain, yelling “Where’ve all sen-sations go-o-ne? Where’ve all sen-SATIONS GO-O-ONE!?!?”