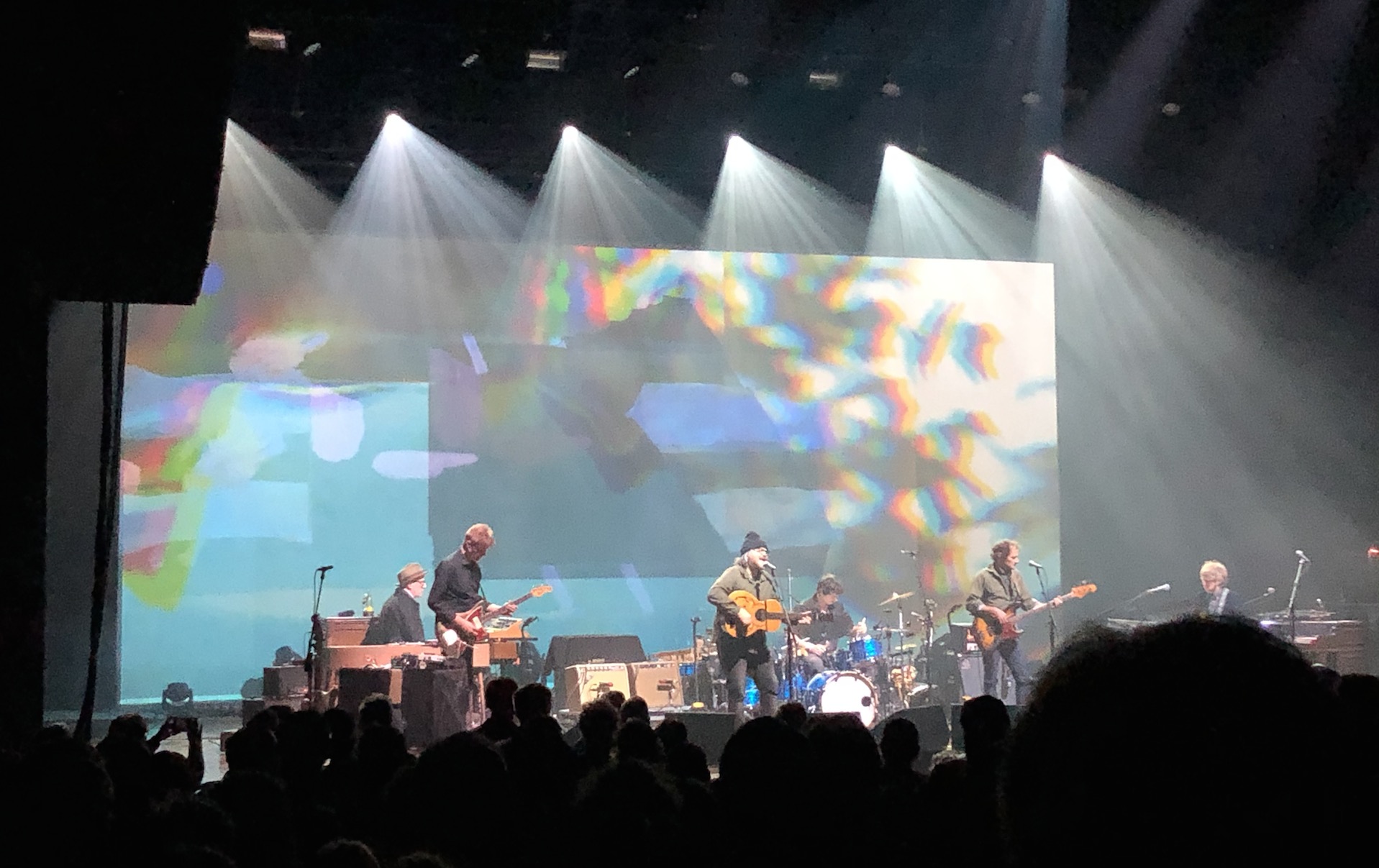 For a Chicago band, Wilco have quite the soft spot for Massachusetts. Since 2010, they’ve hosted and curated the Solid Sound Festival in North Adams, inspired by the Berkshires area after playing a show at Tanglewood. And though the ever-evolving indie rock mainstays have spent the last few months crisscrossing Europe in support of their new album Ode to Joy, they elected to open the American leg of their tour with a two-night stand at Boston’s own Wang Theatre. Thursday night (October 10), the group got started with more than two hours of classics and deep cuts, throwing more kindling onto their bright-burning New England love affair.

As one-third of the vocal trio Mountain Man, Alexandra Sauser-Monnig, who performs solo under the name Daughter of Swords, is no stranger to singing a capella. So while it wasn’t a surprise when she began her opening set with an unaccompanied vocal number, it was still spellbinding in its unadorned beauty. Though at first I feared she would be drowned out by people finding their seats and chatting with their neighbors, it didn’t take long for folks to realize they’d better pipe down and listen closely, lest they miss something special. Besides two additional a capella songs which sounded like timeless spirituals, Sauser-Monnig accompanied herself for the rest of the set on acoustic guitar, her gentle strumming and fingerpicking elevating folk melodies which seemed to hold wistfulness, hope, melancholy, wonder, and mystery without ever settling for just one emotion.

Ode to Joy finds Wilco in a quiet, contemplative mood, and the two new, primarily acoustic songs with which they opened set an appropriately gentle tone. Of course, Wilco’s reputation as classic-rock deconstructionists precedes them, and it didn’t take long for them to disturb that peace. A song like “I Am Trying to Break Your Heart” may be, at its core, well-arranged folk-rock anchored by an unshowy but sturdy Jeff Tweedy melody, but dissonant piano licks and swarming, noisy bursts from resident guitar virtuoso Nels Cline lent a thrillingly destabilizing effect to the proceedings. That anarchic spirit reached its apex during “Via Chicago,” which collapsed into deafening free-jazz chaos multiple times, the profoundly accomplished six-piece band always snapping right back into the song as if the preceding eruption was just a bad dream from which they’d suddenly awoken.

It probably goes without saying that the members of Wilco do not move around much while playing (though they did have some nice, tasteful on-screen visuals). Yet the sheer density of excellent musicianship going on at any given time ensured that one never felt understimulated. Take Glenn Kotche’s drumming- subtle on the quiet numbers, driving on the Krautrock-y “Bull Black Nova,” playful on the shuffling, poppy “Heavy Metal Drummer,” he managed to be consistently interesting while always serving the song. And though Tweedy may be the singer, Cline threatens to usurp him as the star in concert. His solo on “Impossible Germany” was a thing of beauty; at first, he would pause between phrases, as if to give us time to absorb what we had just heard, but by the end he was unleashing a dizzying avalanche of notes. Afterwards, the audience applauded for so long that Tweedy had to cut them off with a half-joking “we don’t have time for this.”

Great as the band may have been, the soul of Wilco lies in Tweedy’s achingly lovely songwriting, and many of the night’s most satisfying moments were also the simplest- the quiet despair of “How to Fight Loneliness,” a stripped-down take on the heartbreaking valentine “Reservations,” the euphoric, cascading guitar riff on Ode to Joy highlight “Love Is Everywhere (Beware).” For pure emotional impact, however, there was no topping main-set closer “Misunderstood;” life offers few opportunities for transcendence as pure as howling “NOTHING! NOTHING! NOTHING!” at the top of your lungs in unison with a crowd of thousands.

For the encore, Wilco shed the arty trappings they’ve accumulated over the years for a return to the raucous, fun-for-fun’s-sake rock and roll of their early days. “I Got You (At the End of the Century),” “I’m Always In Love,” and “I’m a Wheel” ended the night with a scream and a bash, proving that at this point in their career, there pretty much isn’t anything Wilco can’t do.