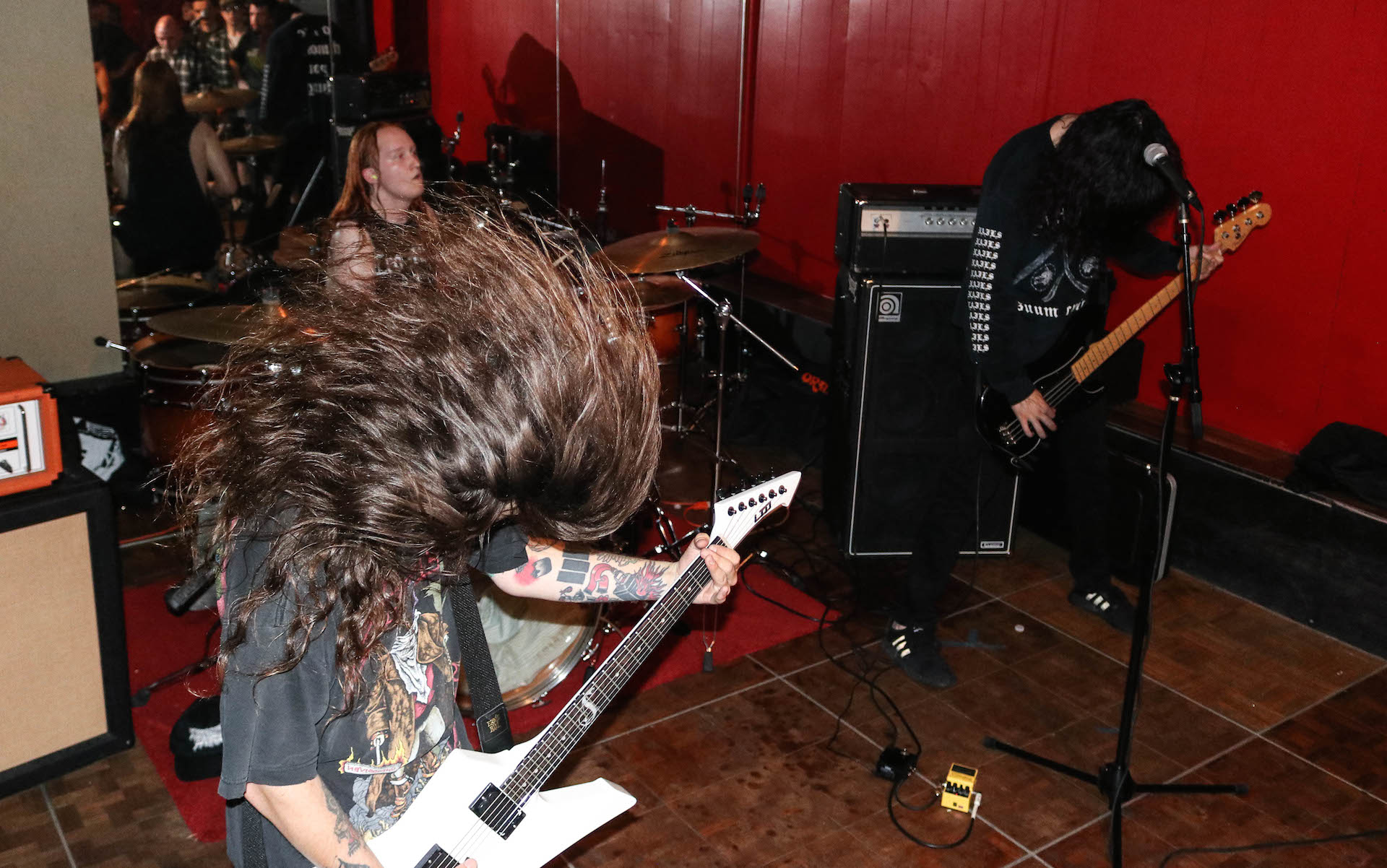 Unrelentingly aggressive and furious-sounding, Boston death metal trio Fuming Mouth draw influences from ’90s death metal bands, hardcore, and grindcore. A number of bands over the year have bridged death metal and hardcore, like Gatecreeper and Nails, but Fuming Mouth do so with their own brand of snarling ferocity that sounds like it comes from tortured roots.

The cover art for this month’s new album The Grand Descent features a ghostlike figure, mouth agape as if it’s a guttural scream, wielding a knife in one hand dripping with blood and cradling a burning fire in the other. The imagery is surreal and larger-than-life, much like how Fuming Mouth appear onstage, as they did last Friday (June 14) at their record release show at Cambridge’s Hardcore Stadium with Blood Tithe, Mourned, and Creeping Death.

Fuming Mouth shows are extremely high-energy, with the crowd feeding off the band’s restlessness and intensity. They opened with “Burning Hand” from The Grand Descent, filling the basement of Hardcore Stadium with hard-beating, pummeling drums and anguished lyrics like “The sands of time burn red as the heat roars in my hands / The blast lights the grains into vitrified glass / Shatter and smash everything I touch / Let it break.” They also played “Fatalism,” the equally forceful and furious opening track to The Grand Descent. Then there’s “Transfiguration,” an extremely cathartic track with stinging lyrics like “Peeled to the bone / Sliced from the front of your head / I’ll cut off your face and wear it as mine.”

At this point, the crowd, which has been moshing wildly since the opener “Blood Tithe,” had gotten even more energetic and fervent. Whelan’s unhinged and growling vocals lend a wild edge to The Grand Descent, and that is apparent in their live show as well.

After playing new songs “Great Equalizer” and “Out of the Shadows,” Fuming Mouth turned to some older songs. “Executioner’s Sabbath,” from their 2013 demo, sounds different, with less of a hardcore influence, but it is clear how the band developed from this foundation that recalls old school death metal, and retained some core elements. They ended with “Infernal Void,” also from their 2013 demo, a grand and apocalyptic-sounding track with a steady beat that reminds me of soldiers steadfastly marching into hell guided by some ominous light. With the exception of the slower “Infernal Void,” Fuming Mouth did not vary their energy or slow down much during their set.

The gatekeepers of death metal — Cannibal Corpse, Death, and Morbid Angel — still inspire rising death metal bands. But new bands like Fuming Mouth are combining the original death metal sound with other genres, carving out a path of their own.