The Irish Comedy Tour finally gets its pot o’ gold 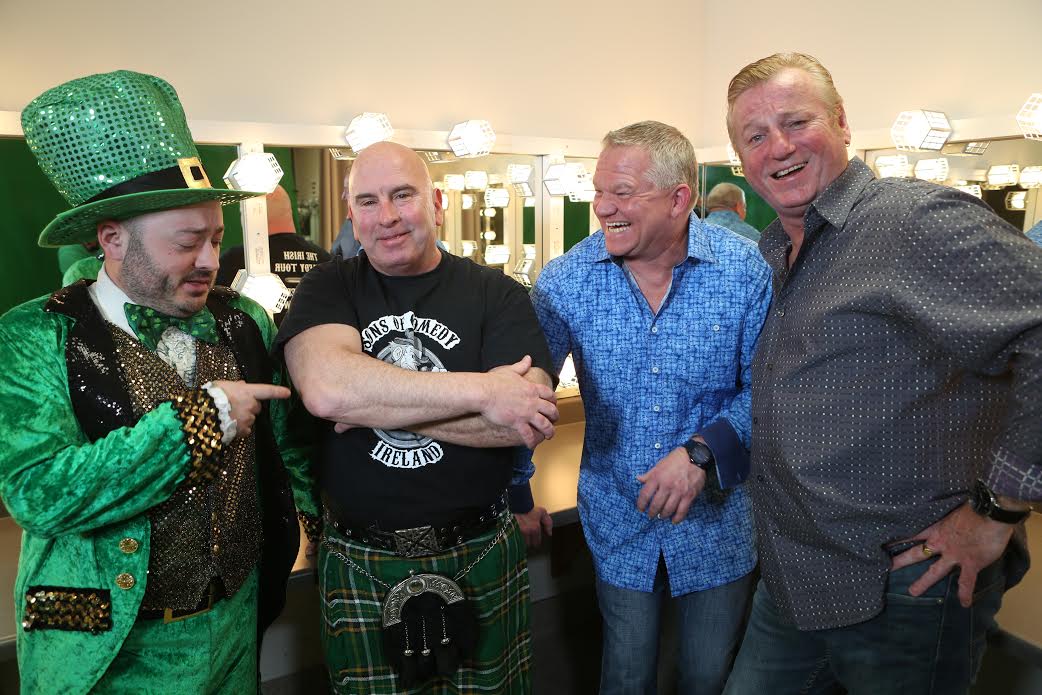 After 13 years going all over the country, the veteran comedy-music partnership are unleashing their first special

After 13 years, hundreds of shows, a handful of guitar players, and an immeasurable amount of alcohol, the Irish Comedy Tour finally has its first comedy special.

Wielding the same name as the tour itself, the Comedy Dynamics-produced special, which drops today (June 11), is not your ordinary comedy special. Resembling more of a documentary than a bonafide stand-up special, the 57-minute recording is riddled with jump cuts that bounce from on-stage stand-up material, to music, to behind-the-scenes glances, and back to stand-up — and to Derek Richards, the founder of the ITC, the editing perfectly represents the unorthodox nature that the tour has latched on to since day one.

“Our show, in terms of a ‘normal’ comedy show, is very different,” Richards tells Vanyaland. “The special is different, as well, in the sense that, not only does it go back and forth to us on stage, but it also goes back and forth to us off stage and behind the scenes, giving the viewer a chance to see what it’s like on the road, and giving them a chance to get to know each of our personalities too.”

It’s taken a little while for the show to evolve into what it is now, with a musical component — headed by Ireland-born guitarist Derrick Keane, and Canadian fiddle wizard Damon Leibert — to accent the stand-up portion executed by Richards, a native of Detroit, and Boston’s own Mike McCarthy, and fully achieve Richards’ vision of mixing the feel of an irish pub with a comedy show. With that evolution now on full display, Richards admits that it still hasn’t fully sunk in yet.

“I really could not have seen this thing evolving the way it did thirteen years ago, compared to where it is now,” says Richards. “Now, to imagine this special airing on nine different platforms on demand, it’s a pretty jarring. It’s really a lot to absorb.”

Richards is a firm believer in the idea that Boston holds the best stand-up scene in the country, so it only makes sense that Medford native Mike McCarthy has been his right-hand man since the genesis of the ITC.

McCarthy, the self-proclaimed “Comedy Barbarian”, shares many of the same sentiments as Richards, in terms of what it’s like seeing the tour evolve from playing small dive bars and Italian restaurants to selling out theaters. He’s also beyond honored to represent the Boston comedy scene on the tour and special, and to have to have the chance to bring the caliber and mystique of Boston-bred comedy all around the country just adds to the excitement of having this special see the light of the day.

But above all else, as much as he enjoys spending time with guys he considers to be his brothers, he’s low-key glad, for the sake of his own health, that the tour only happens for a few weeks around February and March every year.

“I wish it wasn’t so huge for two months, and then sporadic for the rest of the year,” says McCarthy. “But, honestly, it’s probably better that it falls that way, because if it was throughout the whole year, I’d be dead by now. The amount of drinking that occurs on this tour is absolutely mythical.”

The quartet that makes up the Irish Comedy Tour are excited, to say the least, that this special is out for the world to see now, but they’re also excited for what the special will unlock for them, in terms of new opportunities, cities to visit, and venues to perform at. McCarthy is quick to admit that they may enjoy the liquor, but their professionalism isn’t trumped by the devil’s water, and their love and respect for each other runs deep.

And while they consider themselves “brothers,” McCarthy feels that it’s their mutual agreement that they’re all lucky to be in their position that keeps the bond strong, without any drama to dilute the fun they have while on tour together.

“It’s like we’re robbing people. I can’t believe it’s true that I get to have this much fun,” says McCarthy. “I think the biggest thing I take away from this special coming out is that it’s going to open us up to a lot more people, and having people see this special will make them want to have us around for more shows. Everybody wants to book us for the time around St. Patrick’s Day, and not a lot of folks are itching to have us in August, but hopefully this special is a game changer for that.”