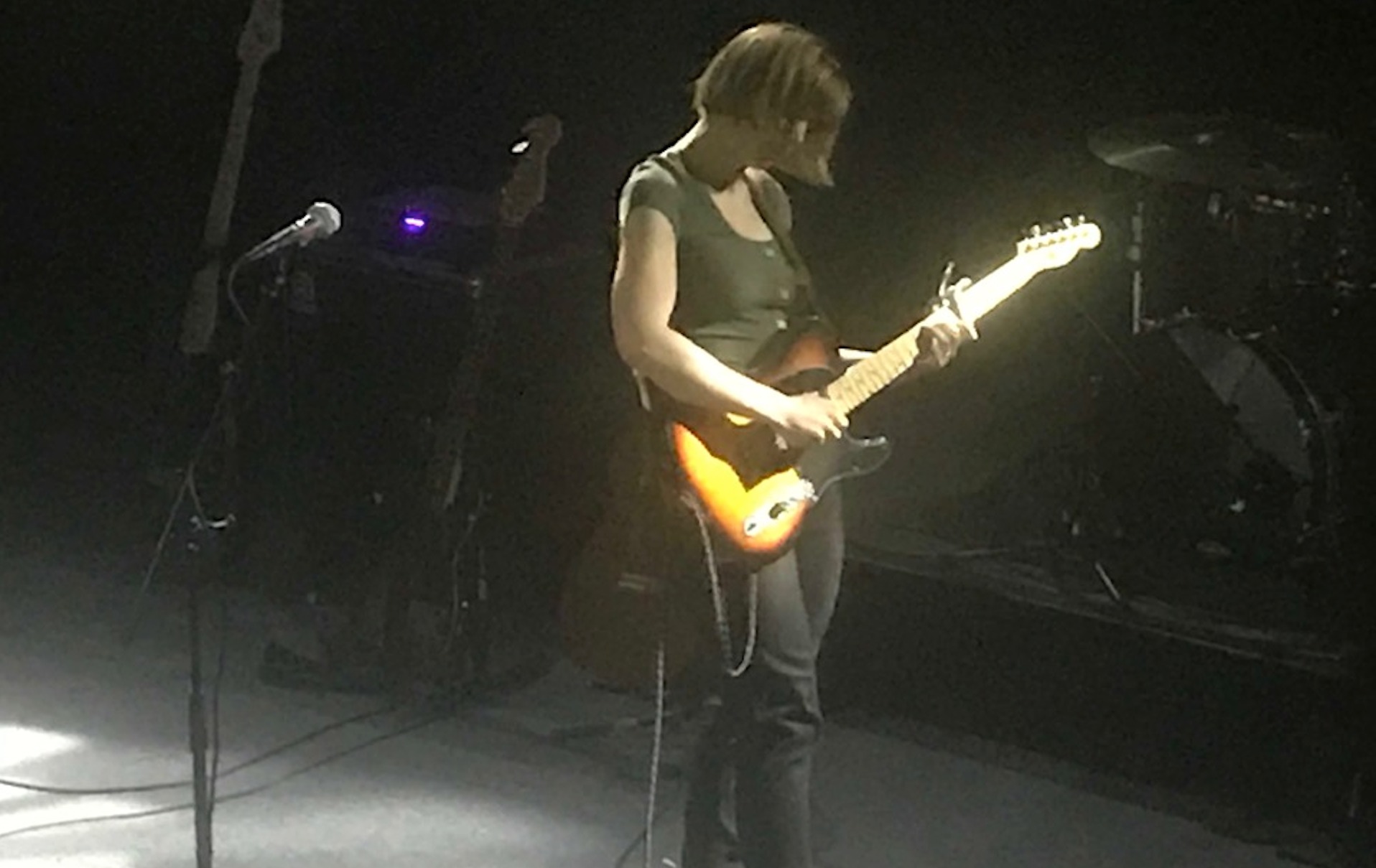 Could be that it’s time to rethink the word “heavy” as it pertains to guitar-based rock and/or pop music. Second on the setlist for Laura Stevenson’s tour stop at Cambridge’s The Sinclair on Wednesday (May 22), “Value Inn” off her new career zenith The Big Freeze, has virtually nothing to do with the antiquated style of metal we habitually associate with “heaviness.” It is not busy. It does not necessarily demand to be played at maximum volume. However, once scientific advancements provide us with a means of turning songs into solid objects, “Value Inn” will require tremendous, perhaps superhuman power to lift off the ground.

And I don’t even mean that because it address a serious topic, because maybe it does, or maybe it doesn’t? The Long Island singer-songwriter tends, in varying degrees, to keep her lyrics abstract, and I don’t have enough confidence in my poetic-code breaking abilities to suggest what “Value Inn” is literally about. I’m talking about its essence, here.

It’s the type of essence the right performer can — with only a microphone, a handful of stringed instruments, and two other musicians at her disposal to accent or draw out a note here and there — weild to squash a room full of people. As if that wasn’t already impressive enough, Stevenson also demonstrated how her characteristically non-threatening delivery can, in the proper context, convey sociopathic menace, even with benign phrasing, to be specific, “So nice, I am so nice. Soooo nice, I am so nice.”

The wacky thing is “Value Inn” isn’t even the best song on The Big Freeze. The best song on The Big Freeze is the stunning folk epic “Low Slow.” Stevenson didn’t play that one on Wednesday, but she didn’t have to. Five LPs into a decade-long career, she’s amassed the kind of cult audience that’ll shout out requests — in this case, “The Wait,” “Holy Ghost!” and “Barnacles” — that she’ll regretfully decline to perform because a band can only learn or re-learn a finite number of songs before a tour. (Speaking for myself, I didn’t get “Low Slow,” like I assumed I would, but I did get “Nervous Rex” and “Beets Untitled” off A Record from all the way back in 2008 which I definitely did not expect, so I can only do the opposite of complain.) She’s also had temporal space to rework, even improve, earlier efforts. “Runner” off 2013’s very okay Wheel, as it turns out, feels much more resonate and comfortable in its own shoes when the guitar isn’t plugged in.

While we’ve been too precious with the word “heavy,” we’ve played fast and loose with the definition of “band,” and opening act Kississippi embodies the inevitable consequence of such carelessness. Zoe Reynolds is one person singing and playing guitar with her auxiliary instrument tracks programmed on a looper pedal, but addresses Kississippi, which is her, as a band. But unlike “heavy,” “band” is not meant to be a subjective term. Perhaps it has evolved into one? This question is meant to be explored in a different article, I suspect.

Before Kississippi, Roslindale’s Me In Capris played two fucking excellent songs, then the rest of their set landed somewhere on the spectrum of “pretty good” and “very good,” which felt like a letdown relative to what their onset led me to anticipate. If I can offer some hopefully constructive criticism, I would suggest that button down shirts at a rock show are kind of off-putting, and Me In Capris should not perform while dressed as if they all clocked out of their office jobs and dashed straight to the gig, unless that is exactly what they did because necessity demanded it so, in which case, y’know, nevermind, do what you y’gotta do.