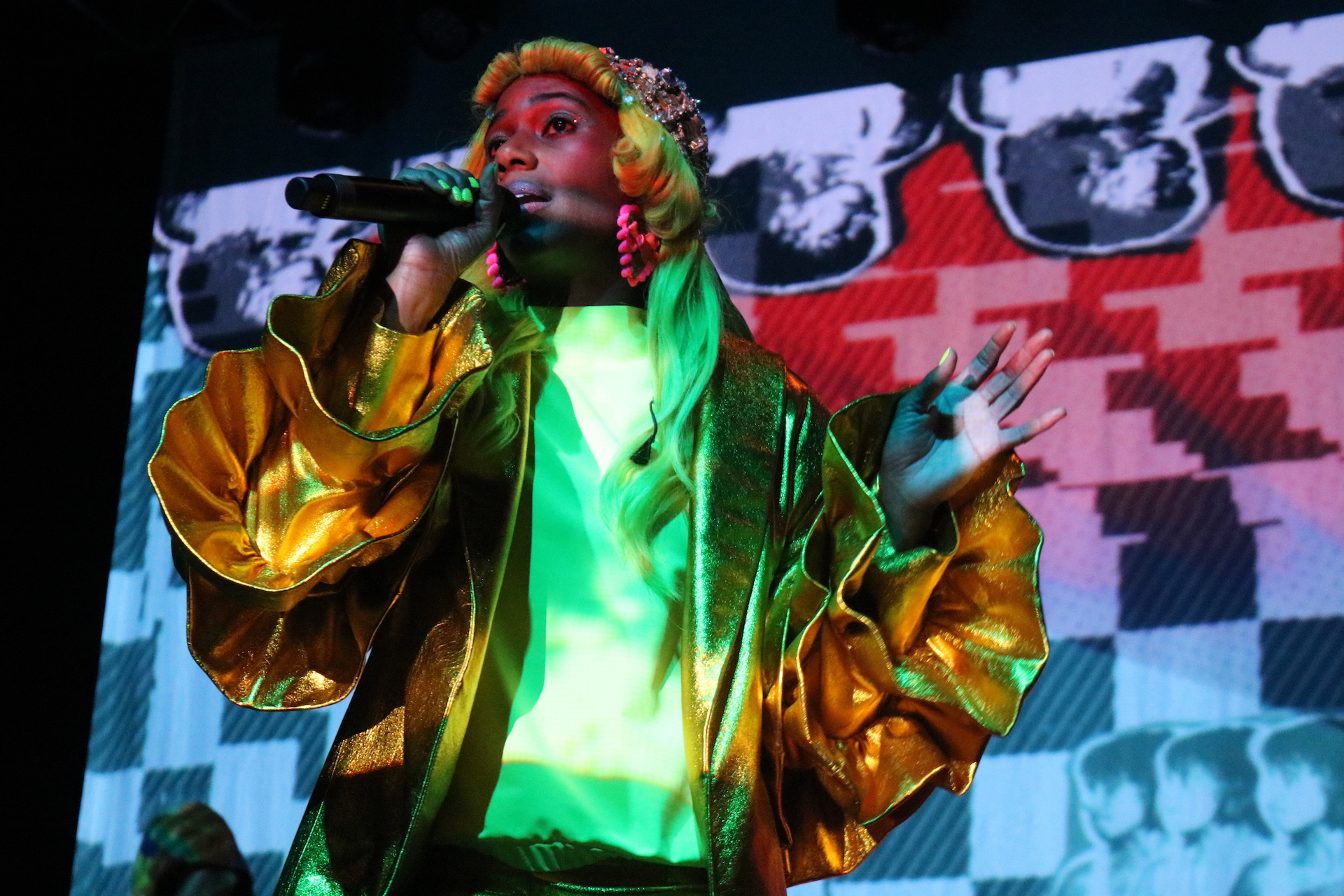 Santigold doesn’t hold grudges; if she did, she’d have never come to Boston again after 2008.

Promenading around the stage at Boston’s House of Blues last night (May 2), the singer had no problem recalling how far she’s come since her first show in town about 10 years ago: An affair opening for Coldplay that not only involved having to get a steroid shot in the ass, but also being booed onstage in spite of her valiant efforts.

“I lost my voice a couple of days before the show, so I got a shot in my butt,” she recalled, stifling laugher between words. “And I don’t fuck with those steroid shots, but my voice came back!”

Marking a decade since her debut record Santigold (originally titled Santogold, for the sticklers out there), her show last night in Boston, the latest stop on her “10 Years Golder” tour celebrated the same record that got her heckled at the beginning of her career under the Santigold moniker.

Graciously overlooking the matter, she took 30 or so fans into her gold-lamé ruffled arms before a dance interlude like a pious musical redeemer, clutching both children and grown-ass men in her petite frame. It proved to be a cordial gesture, considering that her entire performance could have be the “I told you so” show, as she honored the alternative legacy of the very album that established her genre-defying notoriety.

“I knew it wasn’t about me . . . [but] you guys better show me some love,” she said, stomping around on what could have been her very own Planet Dub, complete with a black-light-neon cosmic bowling aesthetic and fluffy stage decor, seemingly plucked directly from a Dr. Seuss book.

Miss Santi White did not enter the music realm to become one of the golden girlies of popular music — perhaps that’s why she’s pictured as quasi-vomiting a trail of glitter on Santigold’s cover, an image she made sure to project behind her at certain points to remind you where the hell she came from. Instead, she’s far more content to flex her mastery of weaving electro tendencies with reggae fusion, a musical concoction that’s she certainly didn’t invent, but has been repeatedly lauded for over the past decade.

It’s a reputation that she brashly willed into existence with “Creator,” the mission statement of Santigold, both the album and the person.

“Me, I’m a creator / Thrill is to make it up / The rules I break, got me a place / Up on the radar,” she asserted as prompted the crowd for the whiplash of her shifting musical styles.

She unleashed the full snaps and crackles of the glitchy dance presence of “Starstruck,” later shifting to a metaphorical curtsy on the much more docile, indie-rock-grounded “I’m A Lady.” A rosy, junk-filled dystopian wasteland unfolded on the projector screen behind the Philly singer for  airy “Lights Out” after the dizzying dance stamina of “Unstoppable.” She recalibrated frequently, relocating her reggae fusion core with songs like “Shove It,” “Chasing Shadows,” and “Running the Road.”

White is the ruthless master of her fickle, frenzied, sparkle-soaked domain. She didn’t come for the charts — or the RIAA certifications, or the various award recognition. From her spunky, motley catalogue, she’s crafted something perhaps more worthwhile in the long run.

And 10 years into her leading-edge tour de force,  Santigold is still worth her weight in pure musical deviation.