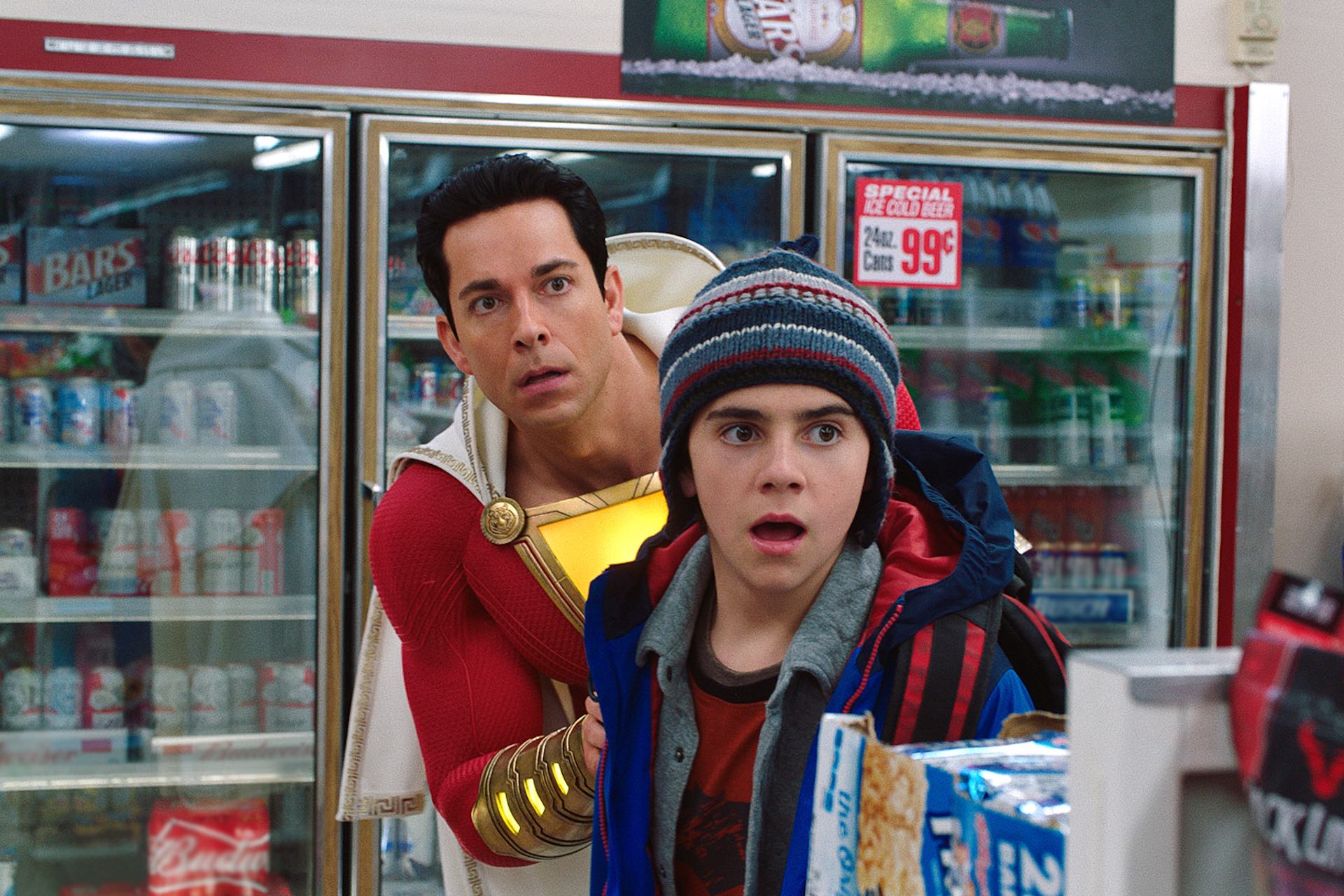 After decades of development, fans of the original Captain Marvel have been rewarded for their patience with the release of David Sandberg’s Shazam, a superhero comedy which has received unanimous acclaim in the build-up to its theatrical debut. It’s nice that we managed to get this film first instead of the constantly kicked-around Dwayne Johnson-led Black Adam film, which would have been kind of weird, introducing the main antagonist of a series before doing anything else. And you know what? The early praise is mostly right on the money: Shazam is a solid and occasionally very funny little movie, whose low-stakes and commitment to its own brand of silliness makes for a charming time, even if it’s got a number of huge problems that prevent it from being truly great.

A quick disclaimer: I have never been a fan of Geoff Johns’ approach to the character, which premiered in the back of Justice League comics after the company-wide relaunch in 2011 and is the basis for storyline used in the film. Why? Well, I had always found the gee-wiz tone that the character had before that appealing, in kind of a silly way, a continual testament to the goofy Golden Age tone that defined so much of the character’s history. So, Johns’ grittier treatment, when paired with artist Gary Frank’s scratchy realistic style, stripped the Shazam story of its defining characteristic and replaced it with a real bummer of a story. That’s not to say that some darkness isn’t appropriate when using a character like this — one need only look at Mark  Waid and Alex Ross’s Kingdom Come or the treatment for Alan Moore’s Twilight of the Superheroes for examples as to how to do this smartly — but there’s a reason why a writer like Grand Morrison, when writing his maxi-series The Multiversity back in 2013-2014, chose to follow up the series’ single-most depressing and nihilistic issue with a charming throwback about the Marvel family. That eternal sweetness that these characters are defined by is never saccharine, and I’ve always appreciated that earnestness about them.

So, Sandberg tries to have it both ways: he uses Johns’ new origins for the characters to provide much of the thrust of the plot, along with the occasional anarchic joke or whatnot, but tries to keep much of the goofy magical world that these characters inhabit alive. So, we’ve got young orphan Billy Batson (Asher Angel, who looks like Maisie Williams’ identical twin brother), who has been placed in (and escaped from) foster home after foster home, ever since he lost his mother in a carnival crowd when he was a small child. He really, really wants to find his mom, and he’s extremely dedicated to his task, which sees him literally track down every single Batson in the Philadelphia phone book in his quest to find her. It doesn’t work, he can’t find her, and he’s placed in a group home run by a married couple (Cooper Andrews and Marta Milans) who are themselves former fosters. They have five other fosters living with them: superhero-obsessed “disabled” (his words, not mine) Freddy (Jack Dylan Glazer), college-bound Mary (Grace Fulton), techie Eugene (Ian Chen), shy Pedro (Jovan Armond), and precocious Darla (Faithe Herman). They’ve all formed a stable family unit, full of love and support for one another, and Billy wants no part in any of it, because, after all, he’s not an orphan or a foster — he has a mom, and he’ll find her eventually. But for the time being, he’s cool with waiting it out, pretending to be into this “family” bullshit, and bolting at the first opportunity.

One day, after defending Freddy from bullies (after they literally hit him with their car!) and a short chase into a subway station, Billy manages to escape his pursuers by catching a train before they can. As he rides the subway, the other passengers disappear around him, the electronic signage starts displaying weird glyphs, and the windows frost over, as he’s transported to a very weird alternate dimension called “The Rock of Eternity.” Residing there is the Wizard Shazam, who once guarded over the world with five other wizards of equal strength, who prevented the anthropomorphized Seven Deadly Sins from destroying the Earth many, many years ago. The sins were trapped in stone statues up until recently, when a rich super-scientist named Thaddeus Silva (a very goofy Mark Strong), came to the Rock, stole a treasure called the Eye of Envy, and freed the sins — garish monsters in their own right — from their prisons. You see, Silva and the Wizard have some history: Shazam has been looking to pass on his powers to an heir, as he grows old and weak, and when Silva was a child, he was originally selected by the Wizard as a potential heir. He failed the test, and was sent back to his abusive father and brother instead. Shazam continued his quest for decades, never finding the appropriate person — a pure-of-heart soul with good judgement and the best of intentions — until the circumstances made him throw the list of job requirements out of the window.

So, Billy says the magic word (which is actually an acronym), and is transformed into an adult, ideal version of himself, as played by Chuck star Zachary Levi. The wizard, having finally completed his task, rots, and dissolves before giving Billy any answers about what his powers can do. Understandably kind of freaked out by this entire circumstance, Billy heads home and finds the one person he knows who has any knowledge about what’s happening to him: Freddy. The two experiment and discover his power-set: he’s got super-strength, he can shoot bolts of lightning out of his hands, he’s bullet-proof (though it’s initially said by Freddy with what might be the single tinniest line of dialogue in a superhero movie, “bullet immunity”), and he might even be able to fly if he tries hard enough. He also discovers that he can transform back into a kid if he just says the magic word again, which comes in handy when trying to evade his foster parents after a night out experimenting with his powers, and that people think he’s an adult since he’s now got this adult body, so he does all the things that kids think they should do as an adult — he buys beer, checks his friends out of school, etc. The power and celebrity, which comes as a side effect thanks to Freddy uploading all of Billy’s exploits and power tests on Youtube, starts to go to a little bit to Batson’s head, which causes some schisms between him and his newfound family, right as Silva comes a-knocking at his door.

So, what Shazam ultimately winds up being is an awkward fusion of Big and the first Spider-Man movie, where a kid has to learn responsibility after being gifted with unimaginable powers while also discovering that they might not be able to do this adult stuff alone. It’s not bad, mind you — there’s a lot of affable charm in how these characters relate to one another, and the world that Sandberg and company have established is fun to explore and smartly-realized — but it lacks the iconography that made those two films instant classics. For one, Sandberg can’t shoot action, which, up to this point, has been the major saving grace of the DCEU films, which Marvel can’t compete with even on their best day. Everything is oddly sloppy, with occasionally rough CGI breaking the verisimilitude of the sequence, the choreography being obscured by the filmmaking, and, in the last major sequence, the entire sequence being under-lit, making it hard to understand what is happening on screen. There aren’t any moments that really will stand the test of time here, even if there are characters and performances that do. Say what you will about Zack Snyder, but the guy can string together an action sequence that one can follow, while offering up plenty of iconic imagery for nerds to feast upon. James Wan and Patty Jenkins have excelled at this in their efforts as well, and it’s kind of a shame that the one major visual characteristic of the universe has been traded in for gags.

Another issue is that the two performers portraying Batson, Levi and Angel, don’t seem to be on the same page about who the character really is. Angel’s Batson is sensitive, mopey and reclusive, while Levi is energetic, neurotic, goofy and occasionally arrogant. I wish there were more characteristics that carried over between the two actors, as it would make for a better continuity between the two of them. It’s a lot like Raffey Cassidy and Natalie Portman in Brady Corbet’s Vox Lux, though not nearly as badly done, where it’s hard to imagine that this is the same person, even if they are separated by decades. I don’t think Levi should have toned his work down — indeed, his goofy charm is what makes the movie for most viewers — but I wish Sandberg had provided Angel with scenes that let us see his other characteristics, because so much of the dramatic heavy-lifting falls, unfairly, on his shoulders. This problem, perhaps, might have been solved if Freddy’s character had been Billy’s, as Glazer’s energy is a lot closer to Levi’s than Angel’s. There’s also something off-putting about how, out of the seven billion people on this planet, Billy Batson is the one selected for this God-like power, as the Wizard basically shrugs his shoulders and gives up this magic that he’s guarded for years to the first dude who comes in after the Sins are freed. There is a market for earnestly good superheroics — one only needs to look at how Captain America has been received by the moviegoing public after his debut in 2011 — and it’s a shame that they punted on this aspect of Billy’s character instead of embracing it. The film is also way, way too long, and at 132 minutes, it’ll test your patience occasionally as much as it’ll test your bladder, and it’s easy to see how a 100-minute cut of the film might have improved some of the things that I mentioned above.

Happily, Sandberg’s commitment to the weirder aspects of this universe pays off, especially when he plays it with a straight face. The Sins, as rendered here, are a wonderfully silly combination of Power Rangers-style practical monster design and CGI, and Strong swings for the fences with his in-on-the-joke straight-faced delivery of astonishingly ridiculous dialogue. It’s similar to his role in the Kingsman movies, in that he’ll just whole-heartedly commit to whatever wackiness is occurring within his character and roll with it. Levi does similarly, and it’s a lot of fun to watch him build a rapport with Freddy and, you know, actually enjoy having his superpowers. That’s definitely one place where this Captain Marvel improves upon that Captain Marvel, in that we don’t have to be told in interviews after the fact that the reason that the reason this hero is special is that they like their powers: it’s clear from the first minute how much fun all involved are having on this journey. Dialogue-wise, the showdown between Silva and Shazam at the end is amongst the funniest in recent memory without it  being totally glib, and it gives way to the kind of swell Golden Age writing that often defined  the character. So, while Shazam doesn’t totally nail the mixture of family drama and wacky superhero comedy that it’s going for, it’s a pleasant and funny ride that features some fun and committed performances by its leads. I’d love to see more of this character, especially given how absolutely bonkers the sequel that’s teased in a mid-credits sequence is sure to be.