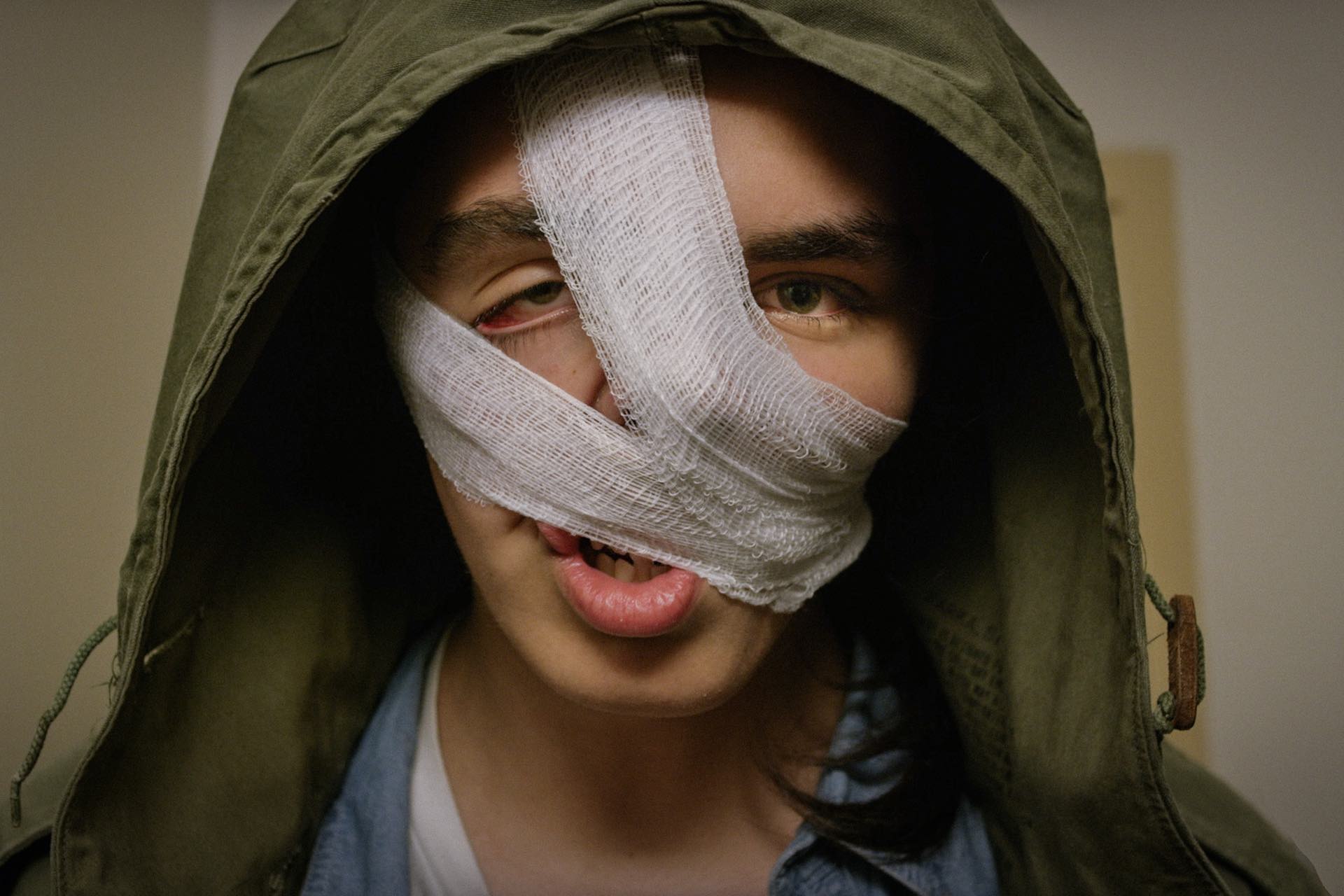 What if the by the books approach to medicine wasn’t actually helpful, and what patients really needed was a wacky rebel to teach them how to act out, love themselves, and be free? Stop me if you’ve heard this one before.

That’s the gist of Alexandre Franchi’s new film Happy Face, which played Sunday at the Boston Underground Film Festival. The French-Canadian film tells the story of 19-year-old Stanislas (Robin L’Houmeau) whose mother (Noemie Kocher) is suffering from cancer and about to undergo invasive surgery to remove part of her jaw. Fearing he won’t be able to look at her disfigured face post-surgery, Stan fakes a disfigurement of his own and attends a support group at the local hospital. Cast with amateur actors who are actually afflicted with facial deformations — whether due to disease, accidents, or birth defects — Stan is struck by their day-to-day struggles to live in a biased society.

After an incident at a restaurant intended to be part of the therapy goes awry, Stan is found out as a fraud. But to the chagrin of Vanessa (Debbie Lynch-White), the actual trained therapist in charge of the group, he is allowed to stay and begins suggesting his own unconventional ideas for behavioral therapy, which include teaching the patients how to fight back when they’re mocked by strangers and a liberal use of heavy-handed Dungeons and Dragons metaphors about inner beauty and completing quests to slay fearful beasts.

Within the group we have Jocko (E.R. Ruiz), a former police officer whose left side is heavily scarred from an on-the-job car crash; Maggie (Alison Midstokke), an aspiring model born with Treacher Collins Syndrome; Otis (David Roche), a senior citizen born with vascular malformation who struggles to reconnect with his stepdaughter; and Buck (Cyndy Nicholsen) whose relationship with her mother is strained because of the incurable warts that cover her face.

In a certain regard, Happy Face does subvert some of the expectations of the ‘unconventional healer’ genre. The film seems very much aware that Stan is a teenager with grandiose ideas of saving the world and that he is more driven by a fear of confronting his dying mother than he is in actually helping the people he’s befriended. In fact, it’s not clear if he helps them at all or just makes their lives worse with his “get out and live” approach to healing. He’s allowed to get away with this through his own manipulations of Vanessa, who though not disfigured struggles with weight and eating issues, which leave her vulnerable to Stan’s charisma and adolescent antics.

The casting of actual facially different actors is a great step forward, and the characters are robust and given the space to reveal themselves as people (most of the arches are semi-autobiographical for the actors). But as vital as that is in the meta-context of the film industry, it’s a shame these performers wound up with a knock-off Patch Adams plot full of cheesy allusions to slaying dragons and haphazard sentimental monologues in service of a foolhardy teenager’s basement psychology.

In one mid-film scene, Otis bemoans his fear of calling his stepdaughter. With no provocation, and no apparent foreshadowing, Stan launches into a tirade accusing Otis of sexually abusing her to which he breaks down and confesses it’s true. How did Stan know this? He didn’t, he sussed it out. Is it a big dramatic moment? Sure. Did he just accuse a man in his 70’s of being a pedophile without evidence or reason in a Hail Mary attempt to make him confront his demons? Uh, you bet.

Happy Face is full of these moments. Take another where Vanessa is afraid of going to the public swimming pool and is ashamed when some teenagers begin making fun of her weight. Stan shows up out of the blue (possibly following her around town beforehand) and loudly proclaims to be her boyfriend in order to give her the confidence to ignore them and swim. So rebellious. Ooh, or when Stan gets buck naked in the middle of a public park and starts humping a cannon in order to make a statement about vulnerability and loving yourself. That’s a fun one.

I fail to see how these antics are any different from Robin Williams’ laughter-as-medicine malpractice in Patch Adams. There may not be anything as singularly absurd as that film’s noodle pool sequence, but it always feels a beat away from Stan breaking out into a dance sequence with bedpans and catheters. Happy Face’s wonderful supporting cast are let down by their normative protagonist trading in Hollywood conventions about disability and adversity. But it would be wrong to discount their own story arches in the film, inspired by their own journeys, and which give the movie much needed nuance. And in terms of sheer empathy, there Happy Face succeeds.