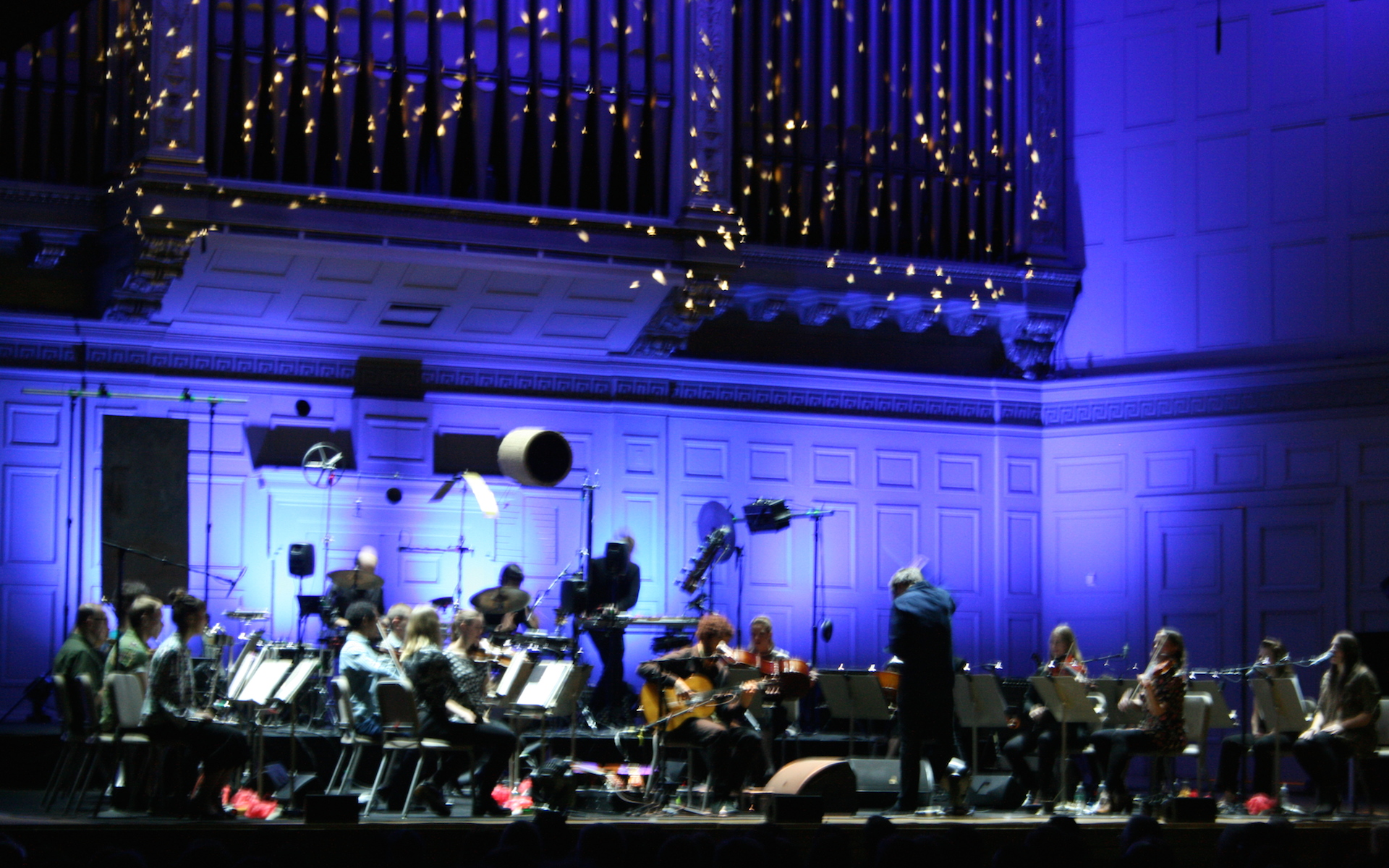 Have you ever felt, for just a few moments, like you’re living in a movie? Listen to enough José González and you, too, will feel a part of the cinematic experience. Add in an entire wacky orchestra and suddenly, as was the case Monday night (March 18) when José González & The String Theory kicked off a North American tour at Boston’s Symphony Hall, the entire audience is partaking in an epic adventure alongside you.

The show didn’t quite start that way, though. The String Theory — an ensemble of about 30 — sat in the blue-cast darkness, rubbing together colored tissue paper. It was a subtle lead-in to the symphonic surge that gradually took over the stage. And it also invited the audience to think more deeply about the difference between music and noise.

When González started performing “Vissel,” it took a few moments to recognize the tune. The orchestra was clapping their hands to Gonzalez’s riffs and the flutist began singing along. Like many of his songs, they can be somewhat indistinguishable from one another; they all have his guitar picking, his honey-sweet voice, and vaguely inspirational lyrics. This time, however, González had the power of an experimental backing band.

There were many points where I had to tell myself:

“Also remember that Jose Gonzalez was once a PhD student in Biochemistry.”

“And don’t forget: The conductor wielding a chainsaw was once a part of the renowned Federal Jazz Orchestra.”

The orchestra was set up traditionally, aside from a percussion section that looked like a mad scientist’s laboratory: Gadgets and questionable instruments dangled from pipes. At one point, a percussionist stood on a table in the back of the stage, banging on a tall sheet of metal. “Why not just use a timpani, which produces a very similar sound?” the audience may have asked themselves. Which is when it was necessary to remember: We’re at Symphony Hall, watching an orchestra. Part of the deal is buying in to theatrics, right?

José González’s music naturally lends itself to symphonic swells. Toward the end of the set, he began playing his famed cover of The Knife’s “Heartbeats” (which, based on the audience’s gasps, was much awaited). The orchestral accompaniment was breathtaking proof that the formula worked: Simple songwriting with complex arrangements makes for beautiful, rich music.

For the encore, Gonzalez snuck in the back of the stage, banging on a percussion set with the rest of the musicians. When the song ended and he took center stage, they all launched into “Down the Line.” The entire audience clapped in rhythm, chanting with The String Theory, “don’t let the darkness eat you up.” The musicians transitioned to the final song, ending with González’s “Leaf Off / The Cave,” repeating, “Let the light lead you out” over and over.

Then, the lights in Symphony Hall turned back on, and the audience shuffled out, buzzing. The film, and all its sound and vision, had concluded.