Marc Maron on the exquisite marriage between podcasts and vinyl

Interview: His album 'In The Garage' drops this Record Store Day in collaboration with Newbury Comics 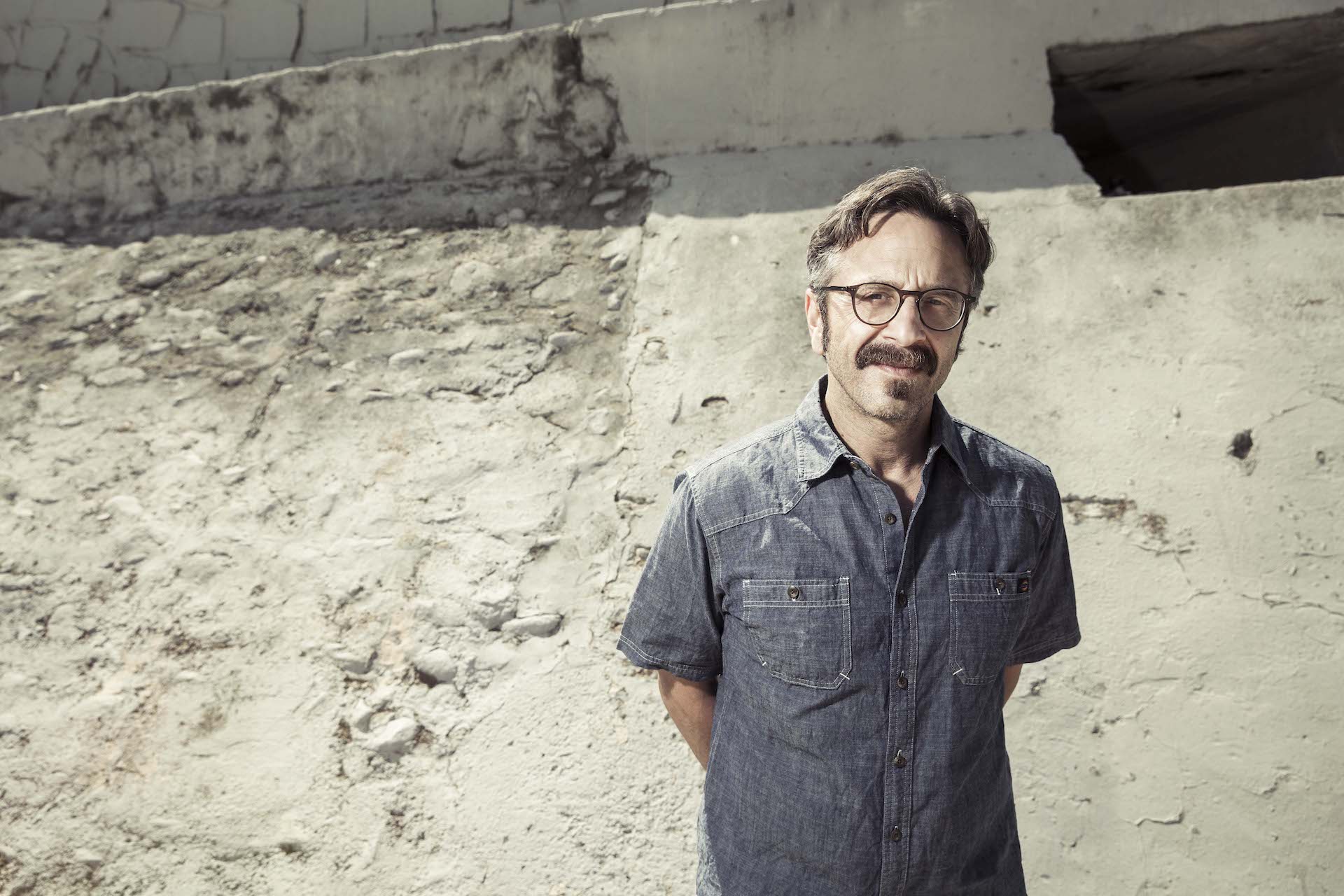 Nearly 1,000 episodes deep into his podcast WTF with Marc Maron, the comedian has been pointing his “rudimentary” gear and microphones at guest musicians for almost a decade now, recording performances from the confines of his garage with no outside assistance.

It’s that very commonality that Maron says makes all the tracks on his new record In The Garage: Live Music from WTF with Marc Maron — Vol.1 fall into harmony despite their glaring differences. Due out this Record Store Day (April 13) in collaboration with Newbury Comics, his 10-track marriage between podcasts and vinyl remains just as eclectic as it is pleasantly unexpected.

“To go from J Mascis, to Melissa Etheridge, to E from the EELS, to Karen Kilgariff and Ben Harper and Charlie Musselwhite — in any other world, I’m not sure the music as it is on the record, side by side like that, that it would necessarily make sense,” he tells Vanyaland. “The fact that they’re all recorded the exact same way in the exact same space really becomes the through line of the album. It’s as raw as it can be in terms of acoustic performances. It all fits together perfectly because the situation is the same.”

In advance of the album, which will also benefit Musicians on Call, Maron kindly turned the tables and played interviewee with Vanyaland, detailing his “primitive” recording setup and process, the closure that’s come from the album after his rough young adulthood in Boston, and getting up in Jason Isbell’s face (literally).

Victoria Wasylak: Where did this idea to make a podcast-oriented vinyl release come from? Podcasts and vinyl is rather uncharted territory.

Marc Maron: We’ve been doing this podcast for almost a decade now and the truth is, in the beginning, [when] we first started to record people doing music, I didn’t really know that I could do it. I’m working with sort of a rudimentary setup, and I still use the setup I’ve always used. So we had these performances that were singular performances — they were recorded as best as I could, not really knowing anything [about recording], and very simply [recorded].

After a decade, we had a lot of unique pieces and performances by great musicians and songwriters. There was always the idea, and for a few years, [we wondered] “is there any way we could do this?” Then when the opportunity came to work with Newbury Comics, and also to do it for charity — and a specific type of charity — it was a no-brainer in the sense that we have all these things [recordings]; They are what they are, they’re not brilliantly mixed or anything, but they are unique to these performers.

After we did the deal with Newbury, it really became about getting the releases necessary to do it, and choosing people we would put on the record and who would let us use the songs, that kind of stuff. That’s really how it happened. It’s always been a fan request – “why don’t you put a record out?” – but it never really seemed like something we needed to do. The opportunity revealed itself, and not only to do it, but to do it for a good cause and have some label support to make it happen.

How did Newbury Comics come into the fold? Did they reach out to you or vice versa?

You’ve had so many musicians on your show. How did you get to only 10 performances or so for this album?

We went through all of them, and it really comes down to, maybe the recording wasn’t as good for whatever reason, or maybe some of them [the artists] wouldn’t release the songs, or we couldn’t get the song’s release. For some reason, the ones we chose are a very eclectic bunch for sure. It really came down to which ones can we get, which ones have some sort of problem in the recording, and filtering it down like that. That was the process.

The merch people we work with and the people who work with advertising, they were kicking around vinyl projects and ideas for vinyl projects with Newbury. They asked my producer Brendan McDonald if he had any ideas, and we had had this idea kicking around, and that’s just sort of how that evolved. They [Newbury Comics] put out the record, they created the cover art, and I wrote the piece that goes along with the record, but it was all me and Brendan selecting and processing and filtering out which ones we would use.

So, as a whole, how long would you say this album has been in the works?

As a whole, we knew that we had this stuff [recordings], but we didn’t know whether we could use it or how — or if — it would be compelling as a record with the limitations of how I record. We’ve always known we had all this stuff, we’d always talked here and there about “is there a way we could release this? Should we release it all together as a set that’s WTF Music as a podcast? How do we do it?” We always knew we had the stuff and that we could do something with the WTF Music.

All the stuff on there, none of it’s really covers, so all the publishing is within a deal with the artist, so they have to sign off on it, and sometimes I think their labels have to sign off on it too. It was nice to be dealing with a label that could do that legwork. So it’s been kicking around a long time, but the idea that we could do it on Record Store Day, as a special one-off, and support this great charity Musicians on Call, it just made sense. It’ll be out there as a special thing that will eventually become an artifact and eventually find its way to the people that covet that kind of stuff.

The amazing thing about the record really — I listened to it when I got the test pressing, I played it all the way through, and there’s this very eclectic grouping of people. It doesn’t even make sense in any world other than they have played in my garage on my show. To go from J Mascis, to Melissa Etheridge, to E from the EELS, to Karen Kilgariff and Ben Harper and Charlie Musselwhite — in any other world, I’m not sure the music as it is on the record, side by side like that, that it would necessarily make sense.

The great thing that I realized about listening to the record is that because of the limitations, and because all of these songs are recorded the exact same way, (outside of Jason Isbell), all of them are singing directly into a Shure SM7 mic with no effects on their voice. And, most of them were recorded live with what I decided was a good mic to stick in the guitar hole — I didn’t research anything. The SM7 is a great vocal mic, and it’s a very honest mic. And I’m using a Blue enCore 200 mic to do the guitars, so the fact that they’re all recorded the exact same way in the exact same space really becomes the through line of the album. It’s as raw as it can be in terms of acoustic performances. It all fits together perfectly because the situation is the same. It’s a candid situation — they’re sitting there, across from me, alone in this old garage filled with crap, and I’m just sitting there watching the levels on my dumb little analog mixer. I have a six-channel Samson mixer, they don’t even make it anymore. I’m just watching the levels on GarageBand on a single track — it’s primitive, in a way. Because of the consistency of the recording, in terms of how it was recorded, it all fits together beautifully and showcases these artists.

This is going to be your first appearance as a musician on a record. Does that feel unexpected after all these years of doing comedy?

In light of being transparent, I did play lead on a Yacht song not too long ago. I think that might have been my first appearance — not on a vinyl record, but on a song. But yeah, this is my first time playing on a vinyl record playing guitar. It’s exciting! I have no sense of how I sound, really, but I think I did okay. You have me and Dave Alvin, who I love, and I was excited to play with him. I was pretty happy with it – it’s exciting, it’s very exciting.

And that Jason Isbell version of “Elephant” — I write about it in the liner notes — that took place in a hotel room, and Jason and I had done a show together that night. We both appeared on that show Wits. I didn’t really know that was going to be the case, I didn’t know I was going to interview him until shortly before, when I realized he was the musical guest on the show we were both doing. By the time we got to talking, and by the time we recorded the song, he was exhausted from the road in the hotel. We were in the same hotel, I was in his hotel room, and it was 12:30-1 o’clock at night, and he was very tired. I sat there in front of him, and he was sitting in a chair with his acoustic guitar, [while] I was holding one mic to his guitar and the other mic to his face in front of him to record that. So it’s a very intimate… odd [laughing]… but there’s something about the intimacy of the way we recorded it that was pretty special.

You spent a lot of time as a young person in Boston. You went to Boston University, you had a very uncertain time in your life there, and you had said at one point some of the “worst memories of your life” were there. Now, you’re coming back decades later with your wildly successful podcast being released on an album through Newbury Comics. Does it feel like things have come full circle for you?

Oh yeah, definitely. I’m planning on recording my next comedy special in Boston. There’s definitely a full circle feel to it. I don’t spend a lot of time there since I did start out doing comedy there, so there is a bit of trauma, maybe a small amount of PTSD of what I went through in Boston in college and starting out doing one-nighter gigs in places like Lowell and Derby Park. There is a full circle, kind of closure thing happening on a lot of levels.

For more on Marc Maron’s ‘In The Garage: Live Music from WTF with Marc Maron — Vol.1’, click here.