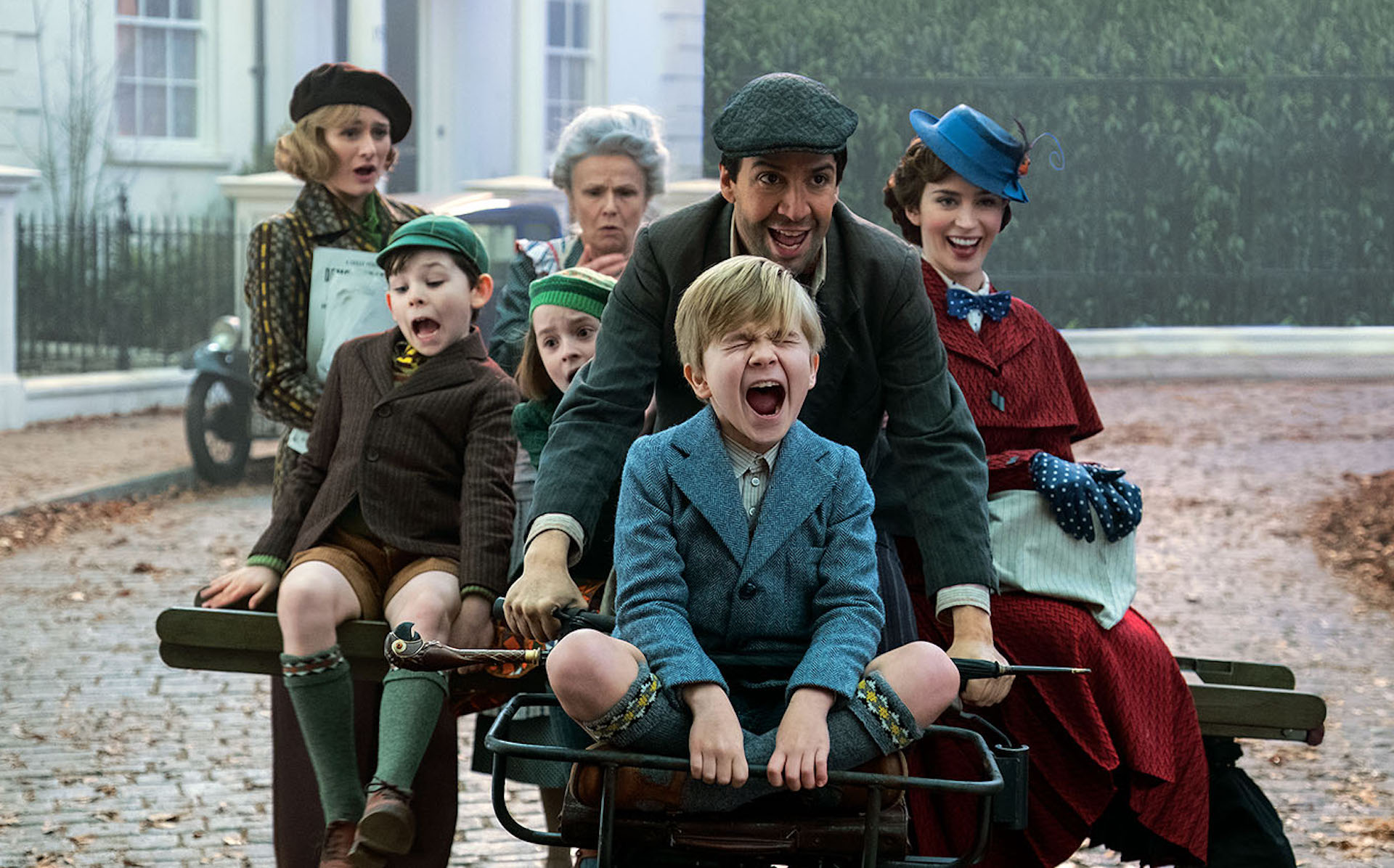 It’s no secret that P.L. Travers, author of the Mary Poppins books, never wanted Walt Disney — or anybody else, for that matter — to make a sequel to the 1964 film that Disney wound up doggedly shepherding to the screen despite Travers’ struggling all the way with it. Plenty tried, including Jeffery Katzenberg, who, according to the Hollywood Reporter, pitched the author back in the 1980s with a concept very close to what ultimately would make it to the screen in Rob Marshall’s Mary Poppins Returns. The Banks children, now all grown up, would encounter an equally-aged Mary Poppins, still played by the iconic Julie Andrews even after all of those years. Travers balked at the idea, save for the potential at bringing Andrews back, and the project never got off the ground. Much like in Pet Semetary, sometimes dead is better, and one might assume that the creator of Mary Poppins might as well know what the hell she’s talking about.

But this is the modern-day Walt Disney company we’re talking about, so now that Travers has passed away and enough time has passed (54 years, to be exact, it’s sequel time, helmed by perhaps the most boring, safe director alive in order to extract the most cash out of its audience’s wallets. Mary Poppins Returns isn’t bad, per se, nor will it taint the memory of the incandescent original: It’s just crushingly mediocre, and, in its own way, that may very well be worse.

As mentioned above, the plot follows what Katzenberg pithed all those years ago: It’s been two decades since the Banks children flew a kite with their father and reclaimed his soul from stodgy adulthood, and, though they still inhabit the same house that they did when they were children, they’ve grown into strong adults — Michael (Paddington Bear himself, Ben Whishaw), a bank teller (at the same bank his father worked for) and the father of three kids of his own, and Jane (Emily Mortimer), a labor organizer looking to help provide for the poor — though they’re not without their problems, Michael especially. He’s been recently widowed, and in order to provide for his children and to cover the costs of his wife’s final days and her burial, he took out an unwise loan from the very bank that he works for.

Now the bank, headed by William Wilkins (Colin Firth), wants their money back, and they’re planning on taking the Banks’ family home away from them. Even a last-second hope — that their father might have owned some shares in the bank and left the receipt somewhere in the home — seems like it won’t pan out. With all seeming lost, and with the youngest of the Banks children nearly swept into the sky by a wind storm while he’s carrying his kite, the clouds open, and a heavenly figure descends upon the banks’ neighborhood: It’s Mary Poppins (Emily Blunt), returning once again to save the Banks children (both generations, in fact). Now, it’s up to Poppins and her lamplighter sidekick Jack (Lin-Manuel Miranda) to save the Banks family home from foreclosure and their grief-stricken souls from collapse.

If there’s one shining star to be found in an otherwise empty sky, it’s Blunt, who tackles such an iconic role with aplomb, and she comes close to matching Andrews’ stately joyousness, even when the material begins to fail her. Of particular note are the hints of melancholy that she brings to Poppins, which have the effect of suggesting a slightly hidden inner life to one of fiction’s most famously omniscient figures (hell, Alan Moore even basically declared her to be God in his literary mash-up series The League of Extraordinary Gentlemen). It gives one a whiff of suggestion that there might be a parental sadness in watching generations of adults and children age, and the faces of those you help crease and ultimately fade, even if there’ll always be a place in the world for your services. She is magical, especially in comparison to Topsy (a horrible Meryl Streep, perhaps playing the immigrant grandmother of Cary Elwes’ character in The Oogieloves), the Eastern European relation that she’s saddled with in this film for the length of a musical number. One wishes Blunt were in a better version of this story, equal to the efforts she put into her performance, one free from Marshall’s colorless direction and screenwriter David Magee’s bizarre plotting, which tosses the original Poppins into the three act structure monster and kind of destroys it in the process.

Less successful is Miranda, who doesn’t make much of an impression outside of the musical numbers, where his talents are truly given space to shine and his particular magic doesn’t feel wholly covered by Van Dyke’s long shadow. The Hamilton creator, a brilliant musician and lyricist in his own right, didn’t participate in composing the score or writing the book for the film — that task went to Marc Shaiman and Scott Wittman, composers of the Hairspray musical — and one wonders what his contributions might have enhanced with regards to his own performance. Certainly, it might have improved the sequence in which he raps alongside a series of precious animated penguins, but perhaps his involvement might have differentiated enough of the material to make it feel less like a pale imitation of the Sherman Brothers’ genre-defining work on the original film. Marshall and company have acknowledged throughout the publicity tour surrounding Returns that they didn’t want to compete with those classic songs, and that line of thinking handicaps their approach. These songs will fade from your memory in minutes, taking a knee as the Shermans’ works return to their pedestals.

Yet the sleepy nature of this affair is typical of its director’s works. Marshall, who somehow managed to parlay a stint in director’s jail after the utter failure of Nine back in 2009 into a chief position amongst Disney’s stable of journeymen directors, reverts to his normal style. There’s just enough suggestion that fun is to be had in a dance scene or that some element of a performance is profound or that actual work was done to craft a setting in order to help the whole horse pill drop down one’s gullet in a relatively painless fashion. There’s such little wonder here that it is almost baffling how empty the entire experience really is (an entire sequence near the beginning in which Poppins takes the Banks children to “the beach” via a bathtub falls totally flat), and the only effective work is done when Marshall apes Disney down to the funny way Walt wrote his “Ds.” Even then, there’s no hope of him matching the man that the whole damn company is named after. and so one has to wonder why they’re not just at home watching Mary Poppins once again instead of watching this tired director continue to fail upwards. Keep in mind that Marshall is the type of director willing to claim the BMX bikers he’s thrown into a dance sequence with Miranda and the lamplighters as a modern innovation, and you should glean all you need to know.

Still, it really sucks to be writing this. There are moments in which I desperately wanted to believe in the film — the animated sequence, where Blunt and Miranda serenade a crowd of cartoon animals inside paintings on the side of a precious bowl owned by the Banks children is a sweet showcase for its leads — and God knows no one ever wants to pan a well-intentioned, if slightly cynical from a financial standpoint, attempt to bring goodwill into people’s lives. But it never manages to separate itself from the pack of revived Disney legacy titles, being another mid-life crisis movie from the Mouse, pitched at the parents rather than what should ostensibly the target audience of something like Mary Poppins Returns: The children. I guess that’s inevitable when you’re dealing with the original source of the “save the parent” archetype (though I will argue that it’s less about getting Mr. Banks in touch with his inner child than to get him to understand his role as an empathetic and sweet parent, a quality that Whishaw never once possesses here), but it’s starting to become an unflattering pattern for a distributor when all of your films boil down to the same soft elements — stressed parent, figure from childhood, generic magic, finance. It’s Christopher Robin, not its forbearer, that Mary Poppins Returns is competing with, and that’s a shame.

Anyways, as far as I’m concerned, the only good Mary Poppins sequel remains “Simpsoncalifragilisticexpiala(Annoyed Grunt)cious,” and one can only hope that the Simpsons never pluck Shary Bobbins from that jet engine in order to have her suffer through a sequel. Though, now that I’ve said that, they probably will.