‘Spider-Man: Into the Spider-Verse’ Review: Spectacular

Or 'Amazing' or 'Astonishing' or 'Sensational' or 'Ultimate': No matter your Spider-Descriptor, the movie's still great 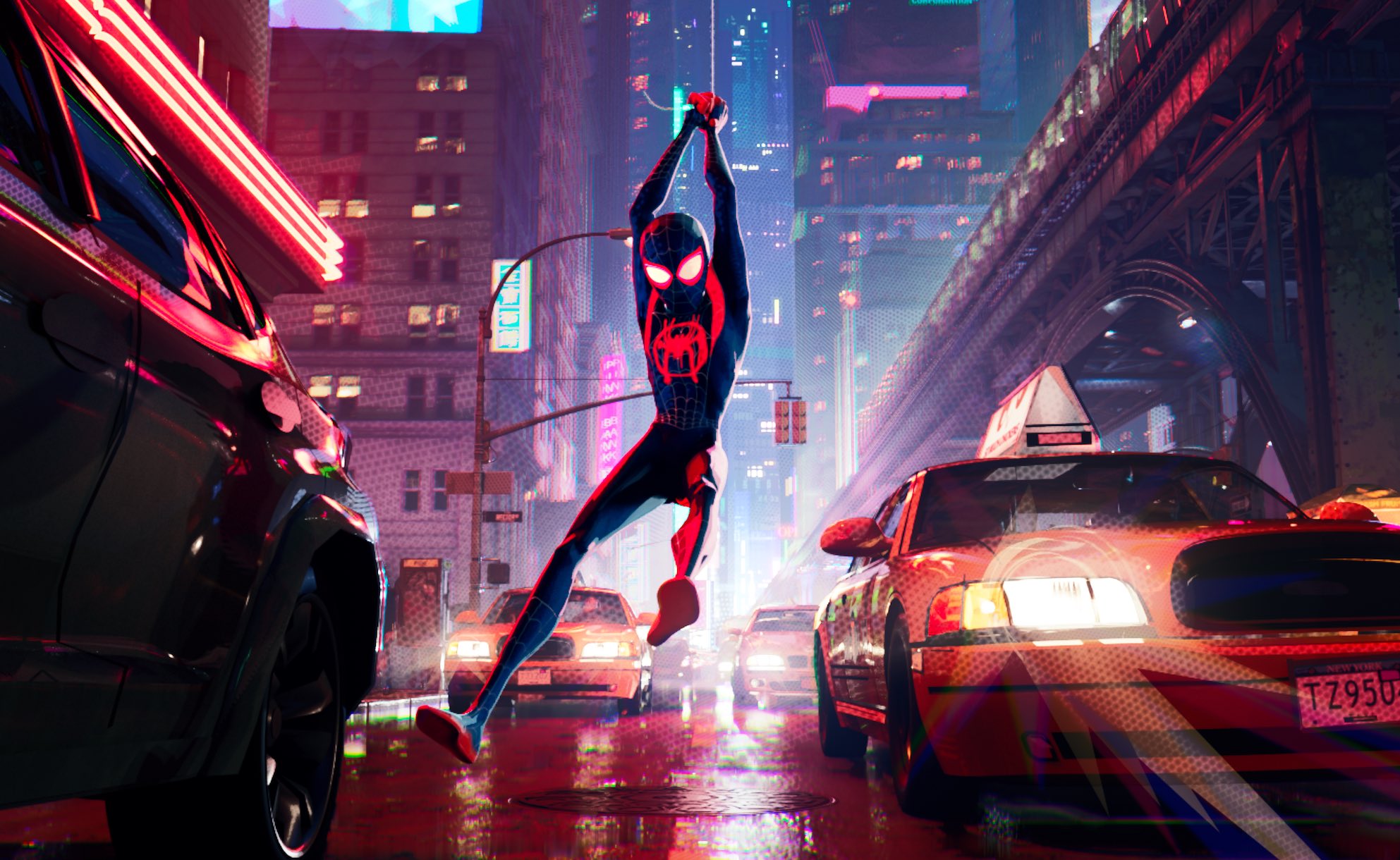 You know, it’s been a pretty damn great year to be a Spider-Man fan — well, despite how all of that business on Titan back in April turned out. The character had a huge and interesting role to play in Avengers: Infinity War; his symbiotic friend Venom starred in what may very well be one of the year’s most memorable comedies, romantic or otherwise (we’re serious about that, by the way), and now 2018 is coming to a close with another feature film starring the wall-crawling web-slinger: The animated adventure Spider-Man: Into the Spider-Verse.

Directed by animation gurus Bob Persichetti, Peter Ramsey and Rodney Rothman, and produced by uber-producers Phil Lord and Chris Miller (of LEGO Movie, 21 Jump Street, and getting-fired-from-Solo fame), Spider-Verse has a brain trust behind it that would make the crews behind most studio pictures envious. And jealous they should be: This film is a massive achievement, both as a superhero movie and as an animated film. Get your tickets now, even before you finish reading this review. Seriously!

Adapted from the Dan Slott-penned 2014 crossover of the same name, Spider-Verse centers around Miles Morales (Shamiek Moore), a Brooklyn teenager attending a charter school who dreams of becoming an artist, who is also caught between the push-and-pull of his law-and-order cop father (Bryan Tyree Henry) and his sketchy but supportive uncle (Mahershala Ali). One day, when tagging a subway station’s walls with his uncle, he’s bitten by a super-weird spider, infused with some sort of inter-dimensional energy. He begins to develop weird super powers (and the puberty jokes are even more pronounced than in the 2002 movie, funnily enough), and attempts to track down the spider that bit him in order to find out more about what’s happening to him. It’s there that he stumbles upon a plan put in motion by the nefarious Kingpin (Liev Schriber) to open a dimensional portal between universes, and it’s also there that he witnesses the sacrifice of his universe’s Spider-Man as he attempts to close it before it can destabilize their entire world. Rocked to his core and still tasked with permanently shutting down the Kingpin’s super collider, Miles is stunned to discover that another Spider-Man (Jake Johnson) is wandering around his New York.

This web-head, an aged Peter Parker from our universe, who has split up with Mary Jane and has eaten his way through the twelve stages of grief, was sucked into Miles’ world through the brief moment in which the portal was opened. He doesn’t want to train Miles or help him out in any way, believing that the powers with which the kid was bestowed are basically a curse. But the two are forced to work together in order to get Peter back to his world. Together, the two discover an array of other Spider-People brought to Miles’ universe by the dimensional rift, including Gwen Stacy (Hailee Steinfeld, who does more here as a voice than she does in Bumblebee), a Spider-Woman from a world in which she couldn’t save her best friend, Peter Parker, Spider-Man Noir (Nicolas Cage), a private eye from a 1930’s universe, Peni Parker (Kimiko Glenn), an anime Spider-Girl from the far-off future who pilots a robot named SP//dr (who is basically a young D.Va from Overwatch) and Peter Porker (John Mulaney), the incredible Spider-Ham, who is a cartoon character from an anthropomorphic animal universe. Phew! Together, the gang of Spider-People will have to stop the Kingpin and save Miles’ world in order to head back to their respective universes, and what unfolds is absolutely magical.

Now, I will say that the animation takes some getting used to: It’s not bad by any stretch of the imagination, but it’s a bit hard to comprehend at first, just with the massive amounts of visual information in every frame being thrown at you by the filmmakers. It’s a fully animated comic-book, full of emphasis marks and giant sound noises, slathered in the tri-color screening that is familiar to anybody who’s read a comic book published before the switch away from classical newsprint that happened in the ‘90s. The style is overwhelming, and for a moment, I thought the approach was ultimately incongruous with what they were going for, but once I adjusted to it, it looks absolutely unlike anything released from a major animation studio in the past ten years, except for, perhaps, The LEGO Movie.

The details are incredible (and probably impressively time-consuming, all things considered), from the minutiae all the way to the top, and they’re so well-baked into the substance of the film that I imagine scores of people are going to have a blast going frame-by-frame through this cherry-picking out little sight-gags that they might have missed the first time around (the film’s alternate-universe take on Times Square provides a bevy of easy laughs, and I can’t wait to catch more of them on the next viewing). Yet, much like The LEGO Movie, it’s not all style, given that there’s a ton of substance here as well.

There’s something here for every web-head; from the aging parent who might have actually had Amazing Fantasy #15 before their mom unceremoniously dumped it to the curb, to the marginalized fan who had felt excluded (especially during the Raimi and Webb eras) from the screen adventures of their favorite superhero, to the youngest of viewers, perhaps getting to know the character for the first time outside of the television screen. Somehow, despite juggling all these chainsaws, Perscichetti, Ramsey and Rothman never once come close to letting them hit the ground. Some of that success is due to how excellently they’ve cast the film, as each new voice fits harmoniously into the world at large.

From the smaller roles like Cage’s gritty greyscale gumshoe to Mulaney’s Looney Tunes take on Spider-Ham; to the non-powered ones, like stealth 2018-in-film MVP Henry as Miles’ goofy yet stern Dad or Ali’s warm but tragic uncle or Schriber’s terrifying Kingpin; to the core wall-crawlers themselves, with Steinfeld’s assured yet empathetic attitude, Johnson’s weaponized concealing sarcasm, Moore’s anxious internal monologue that eventually gives way to skill and confidence; every member of the cast is firing on all cylinders (there’s also a series of delightful cameos along the way that are never once cloying or perfunctory, including one early on that I really don’t want to spoil for you). It’s so well-written and performed that any argument against its inclusionary nature (on the part of its casting) may potentially reflect poorly on the person articulating it, be it an unwillingness to accept some small change to their favorite character or perhaps something more sinister. It’s not pushing Peter Parker out of the way, it’s just making room for others.

Yet that can’t just be it. Spider-Verse’s success also comes from how well they understand the character: Spider-Man, in his own way, is not simply “Peter Parker”: He’s every one of us at our most courageous and brave, who can take a licking, be it physical or emotional, and still keep on ticking (insert that classic quote from Rocky Balboa here). Yet it also never loses sight of another essential aspect of the character’s long-running appeal, and nails it better than any of its predecessors: it would be incredible to take to the Manhattan streets and soar above the traffic below. Certain moments lean into this, like when Peter is teaching Miles how to web-sling for the first time, or when Miles, at a significant moment in his arc, decides to take a plunge from a tall building, and they are as thrilling and exhilarating as you might hope for. And part of that understanding of the character manifests itself in the form, as animation has always been the best medium for, specifically, Spider-Man stories (we could argue all day about the Fleischer Superman cartoons or Batman: The Animated Series being the best versions of their respective characters, a position I’d happily agree with, even if it boils down to personal preference). The action is kinetic, thrilling and occasionally quite funny, though it is never reduced to mere slapstick, and its universe-breaking finale is amongst the most brilliant animated sequences of the new century.

At the micro level, Spider-Verse is essential family holiday viewing; it’s the kind of crowd-pleaser that’s sure to strike the right balance between any number of picky family needs much in the way of the best December releases. On the macro, it’s probably the best on-screen depiction of the character since Sam Raimi’s Spider-Man 2 back in 2004 (my feelings on which I’ve been oscillating on in the wake of this film’s release) and it is, without a doubt, both one of the best studio films of the year and one of the best animated films of the decade.

Spider-Verse is an incredible achievement, one that deserves to be seen on the biggest possible screen surrounded by an audience of Spider-Man devotees for its best possible impact. Even if you’re the kind of person who doesn’t really care for superhero films, I imagine you’ll get a contact high just from being near people who are experiencing a virtuoso rendition of a work of art that means something to them. Spider-Verse is just full of that type of bliss.