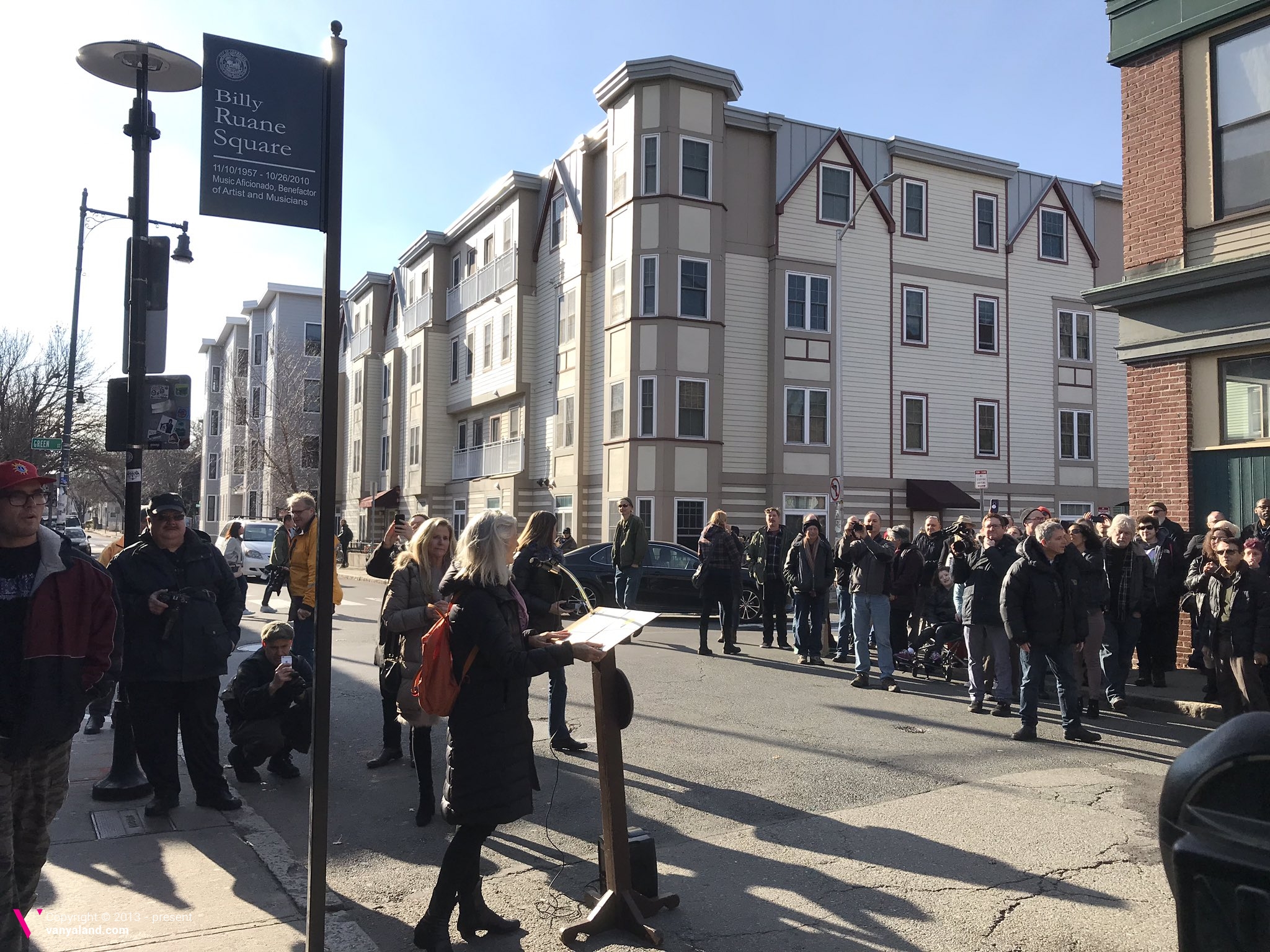 A large crowd gathered along Brookline Street in Cambridge’s Central Square this afternoon (December 1), and like countless times before it over the past 30 or so years, it was caused by Billy Ruane.

The one-of-a-kind Boston music scene icon, who passed away in October 2010 at the age of 52, was immortalized today as “Billy Ruane Square” now marks the corner of Brookline and Green streets.

A marker was unveiled outside Sonia, the former space of T.T. The Bear’s Place, by the City of Cambridge and Vice Mayor Jan Devereux, who addressed a crowd so large it spilled into the street, causing minor delays for drivers passing through and capturing the attention of all pedestrians in the area. A symphony of car horns blared as a proclamation was read by Devereux, and Ruane’s family, friends, and colleagues shared stories and laughs.

Ruane’s spirit was alive and well as many wandered the street holding signs saluting the late scene pioneer, and the perfect weather let the sun shine bright down on Ruane’s freshly-unveiled marker. It read: “Billy Ruane Square, 11/10/1957 – 10/26/2010, Music Aficionado, Benefactor of Artists and Musicians.”

“Hello everyone, welcome to Billy Ruane Square,” declared music journalist and historian Brian Coleman, who partnered with The Middle East in leading the charge to secure the dedication. “I don’t have too much to say; I’m just glad this is happening. We all love Billy and I’m glad his family is here to see all his amazing friends and the people he affected. It’s great that there’s now this monument here… Think of this as a wi-fi signal for the love of music. This will emanate at least through Central Square, and hopefully far beyond.”

Up next was Devereux, who equated the gathering of onlookers to those waiting in line for a show at the nearby venues, suggesting that felt just about perfect. “It’s certainly very appropriate for the dedication we’re doing today,” she added.

Reading from the formal resolution from Cambridge’s City Council, Devereux offered the following: “Billy was a self-described courtier to the musicians. He possessed a precise ear, an infamous dance and an infectious spirit. Billy was a champion of local bands and his legendary generosity remains unmatched, cementing his status as a pioneer of Central Square’s nightlife. And whereas countless up-and-coming Cambridge artists in the rock, jazz, and world music scenes felt fortunate to receive his constant and energetic support… Billy was a music promoter, an impresario… promoting musicians with his characteristic dedication. Whereas his deep emotional connection to music and other people, Billy demonstrated his unique soul and his abundance of love.”

Devereux concluded her remarks by stating that Ruane “lived life with a passion deserving of memorialization.”

From there, Ruane’s sister, Lili Ruane, took to the podium, thanked all who came out, and reflected on her brother. “He was a force beyond all forces that I can ever imagine encountering,” she said.”He knew how to dance and knew how to live life large. May we all just embrace the spirit of such large living with heart.”

Though the party aspect of Billy Ruane’s dedication would evenutally lead back to The Middle East, where his ashes rest in the restaurant’s entranceway to its Upstairs music venue, many took the mic at the podium to share thoughts and stories. Music writer Jim Sullivan joked about how Ruane was banned, for certain time periods, at all the clubs in town, including the two behind the dedication ceremony, only to always be let back in. And Francis Dimenno noted how he wished Ruane was there to see all the action on this December day.

“He meant so much to so many people and it shows by all the people who are here today,” said Chris Pearson of Green Magnet School. “Billy was just great, and so many bands would not have made it as far as they did without him. So, rock on Billy.”

Eric Crowder shared a story about how Ruane would hold court at parties, espousing knowledge about bands and their music and catalogues “in exquisite detail,” and how he celebrated “outsider music” that wasn’t given proper attention by the mainstream. Former Boston Herald writer Nate Dow recalled Ruane standing out on that street wearing a suit jacket but no shirt underneath, and Jeffrey Gagnon of the Well Babies reminded everyone, not that they needed it, that Ruane loved to party. “His energy was infectious,” Gagnon said. “He just gave you that impression that you could do it. Because he had that in him: ‘I could do it, you could do it too.'”

Ruane’s longtime close friend Pat McGrath gave a humorous update on the ongoing Road To Ruane documentary: “I knew Billy fairly well. I’ve been working on a documentary on Billy with Mike Gill. A number of people have asked me, ‘When is that fucking thing gonna be done?’ I don’t know.”

The last to speak at the outdoor dedication was Shawn Devlin of Dumptruck, who kept it short and sweet.

“I kissed Billy on the lips,” Devlin said, and the crowd roared in its approval. It felt like a big, wet, sloppy kiss from Ruane himself.

All photos by Michael Marotta for Vanyaland. 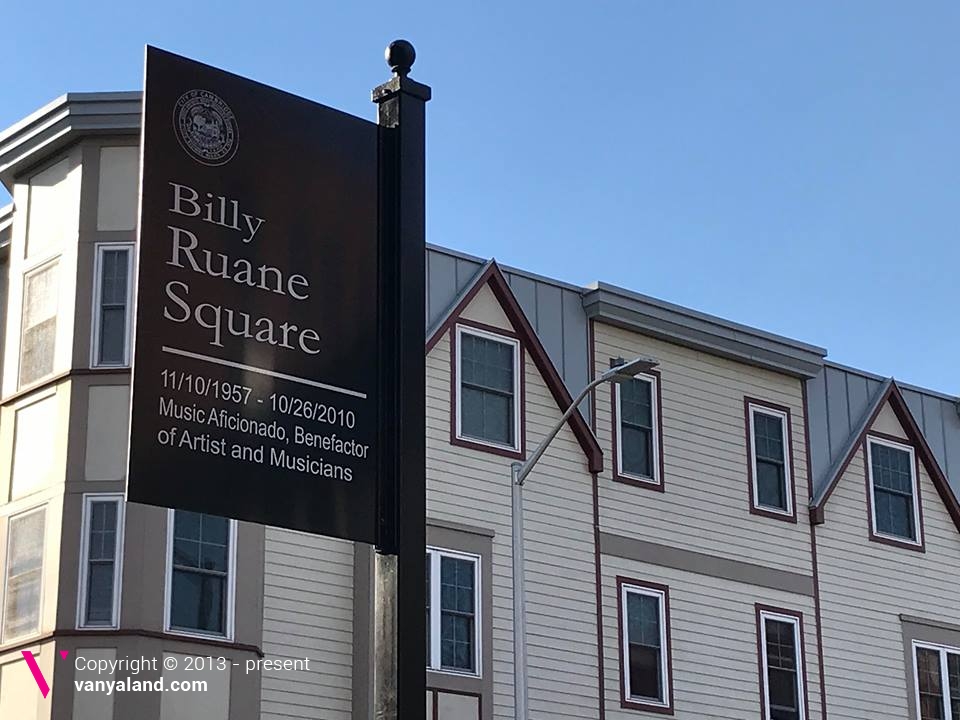