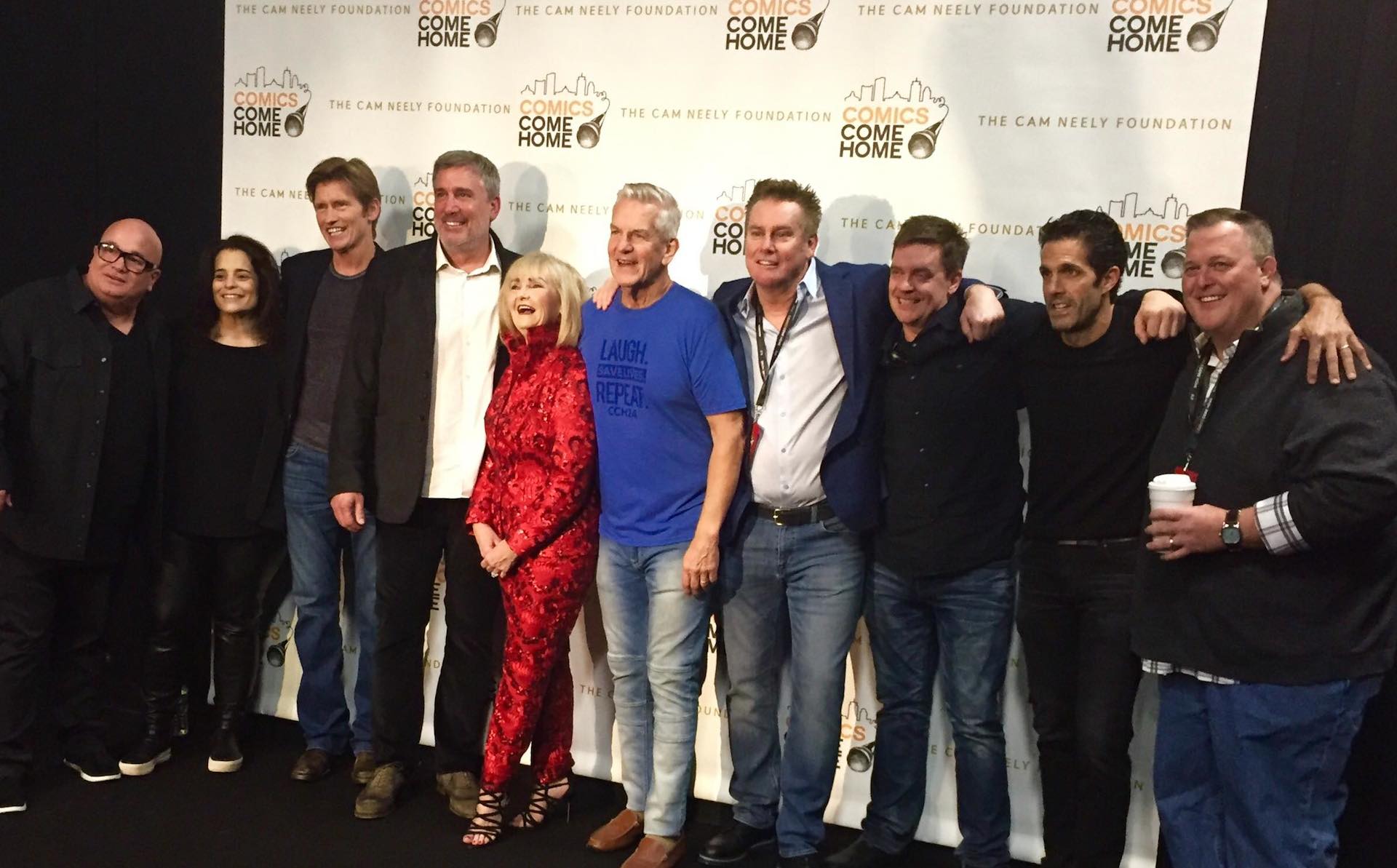 Cancer must hold a resemblance to Ulf Samuelsson or something, because Cam Neely has made it his post-hockey life’s work to kick its ass. And for the past 24 years, Denis Leary and his never-ending rolodex of comedy cohorts have aided the Cam Neely Foundation in his consistent effort of making treatment, research, resources, and assistance more accessible to families, in the form of the massive stand-up celebration we all call Comics Come Home.

The event’s 24th installment, which returned to the TD Garden on Saturday night (November 3) in retaining its title as the longest running comedy benefit in the country, was no exception.

“Every year, Denis lines up some great comedians who generously give up their time, so I’m humbled and amazed by that,” Neely told Vanyaland in a pre-show interview. “Twenty-four years later, it’s pretty amazing that we can still get this amount of people into the TD Garden for this. It just speaks volumes about what comedians mean to the Boston area, as well as what they mean to cancer patients and their families.”

Starting the evening with the annual heartfelt preamble delivered by Sea Bass himself, there was a certain feeling in the air that just made you believe it was going to be a special night. Shenanigans and surprises weren’t in attendance, but the 15,000-plus people that were didn’t seem to care too much, as they enjoyed themselves set after set, with uproarious laughter and a few standing ovations to boot.

There was no political hostility, or blatant attempts at dividing the room. There were no moral showdowns like the showcase has seen in years past, or surprise guests. There were only good vibes, a party atmosphere, and a slew of powerhouse performances by some of the quickest wits in the comedy game today.

Kicking things off with his customary opening musical number, Leary took the opportunity to parody the Rolling Stones classic ‘Start Me Up” in tribute to Neely — something he has wanted to do for awhile, but has been shot down about by the physically intimidating Hockey Hall of Famer.

New Yorker Pete Correale got the night started with his confidently executed arsenal of observational humor, spanning from his experiences waiting in line at public restrooms, his bewilderment of restaurant menus without prices, and the absurd standards of school zone speed limits (“I don’t even touch the gas and the car goes seven miles an hour, how do you expect me to get it down to fve?”).

While Correale got things started, it was local favorite Christine Hurley who got a rockstar’s welcome. The Plymouth wife of a Randolph firefighter took the stage to a feverish applause, fueling a blistering set of stories of her life — from her disdain for “little league mothers” to mention after mention of her husband, Jimmy and the idea that “he is a firefighter, but he’s no fucking hero” due to his not-so-slim frame being the smallest on the force (“If you’re on the second floor of a burning building, you better be holding a bucket of chicken out that window…”). Even with some of her most trusted material from the last time she appeared at Comics Come Home making its way into her set, she was still treated to a Standing O once her time was up, and Leary still brought her back out for even more pandemonium in honor of her side-splitting takes on everyday life.

Not to be outdone at his own fashion game, Lenny Clarke — Leary’s cocaine comrade during the war on drugs — took the stage next in a nearly completely white suit, ready to slay in the only way that Lenny Clarke knows how. Riffing heavily on growing up in Boston, and the ever-so-relatable woes of being a catholic school student (“As I got older, my parents couldn’t beat me as severely as I deserved, so they sent me to catholic school to have it done professionally…”), Clarke made it known that, even after all these years of being an absolute legend in every sense of the word as it pertains to the Boston comedy scene, he isn’t going to be phoning it in anytime soon. Comics Come Home first-timers Jessica Kirson and Billy Gardell wasted no time during their respective sets showing that, while the room was massive, they were up for the challenge of taking the crowd by storm. Hailing from New Jersey, Kirson brought the Garden State grit with her own brand of perfectly non-PC material that, while not relying on obnoxious or tacky devices, packed just as powerful of a punch as it would’ve had she stooped to that level. From the frustrations of playing predominately Jewish crowds to how different races would react to a UFO sighting, Kirson demonstrated just how funny racially-charged humor can be without settling for the shock value of sounding straight-out racist. Especially in a time where any sort of racial humor is met with a certain amount of righteous indignation, Kirson presented a refreshingly funny approach to what is, in many ways, a taboo topic to tackle in today’s stand-up landscape.

Gardell, of Mike & Molly fame, made the most out of his first Comics Come Home appearance, as well, with a well-blended mix of stories he’s accumulated after 17 years of marriage, and a healthy dose of musings he’s found himself in, like how he feels George Washington may have been an alcoholic. By the end of his set, Gardell had the crowd in the palm of his hand, and he took his last few moments in the Garden spotlight to pay tribute to his late father, who passed away from lung cancer, showing just how much of a class act he really is, and further helping the case that this was quite possibly the most powerful Comics Come Home lineup we’ve seen in the last decade.

Robert Kelly basked in his hometown welcome as he took the stage for what was arguably the most titanic set of the night. After giving props to “the fat fucks in the back row,” Kelly proceeded to employ a combination of delivery and material that were both equally impressive. The stories and jokes in his set were funny enough on their own, from his admitted disposal of wedding save-the-date magnets to the realization that he “only has 30 summers left,” but factoring in his delivery just brought his game to a whole new level. Long gone are the days of his long hair, but Kelly is in his best comedy form today, and the Garden crowd let him know it as they sent him off with a rousing ovation.

Filling out the last two spots of the evening were dad-rock comedy all-stars, Jim Breuer and Brian Regan. Breuer, who is still currently on tour with Metallica, knows a little bit about crushing a stadium show, and he employed those skills he’s acquired with flawless execution. Peppering the start of his set with rock god impressions, as well as musings of metal shows of his past, the Long Island native still managed to bring an introspective flair with his material on aging and how 50 is the year that you realize you’re going to die.

Always one to live life like a party, Breuer ended his time on stage with a not-so-subtle nod to how he wants to be remembered: By having his corpse shot out of a cannon while AC/DC’s “For Those About To Rock” serenades the funeral procession. It may have only been 10 minutes, but Breuer played off the energy of the crowd like he was in the midst of a marathon rock show, and no matter what, he’ll still be able to say that he played one more arena than Metallica this year, with as much as power and gusto as they could have mustered themselves.

It hadn’t even felt like two and a half hours had passed by the time Brian Regan took the stage to end the night, but he kept the crowd entertained ‘til the very end.

While not as animated as he’s known to be, Regan still brought his equally-as-revered observations, largely riffing on the oddities of post-game press conferences, as he low-key proved that you can be a clean comic in the presence of comics that are filthy in comparison, and still pack a powerful punch that has the entire audience in stitches.

As Regan made his exit, Leary took the stage to close the show out completely with a Red Sox-centric take on “Dirty Water” that had the whole up and screaming the chorus. Transitioning into his own theme song, “Asshole,” Leary reintroduced the comics before making his way to the front of the stage to take selfies and sign autographs for fans, while Kelly, Breuer and the rest of the gang on stage hurled t-shirts into the floor seats. It was a raucous party for a great cause, and one party that will not soon be forgotten.

There were no tricks or surprises to be had at Comics Come Home 24, but that really only further magnified the power of stand-up when it stands alone from all the little frills that can saturate a gathering of this magnitude. And if there’s only one thing that can be taken away from the evening, as it hits the quarter-century mark in 2019, it could be that, quite simply, sometimes simple is just better.