This Love: Remembering Dimebag Darrell on the 10th anniversary of his murder 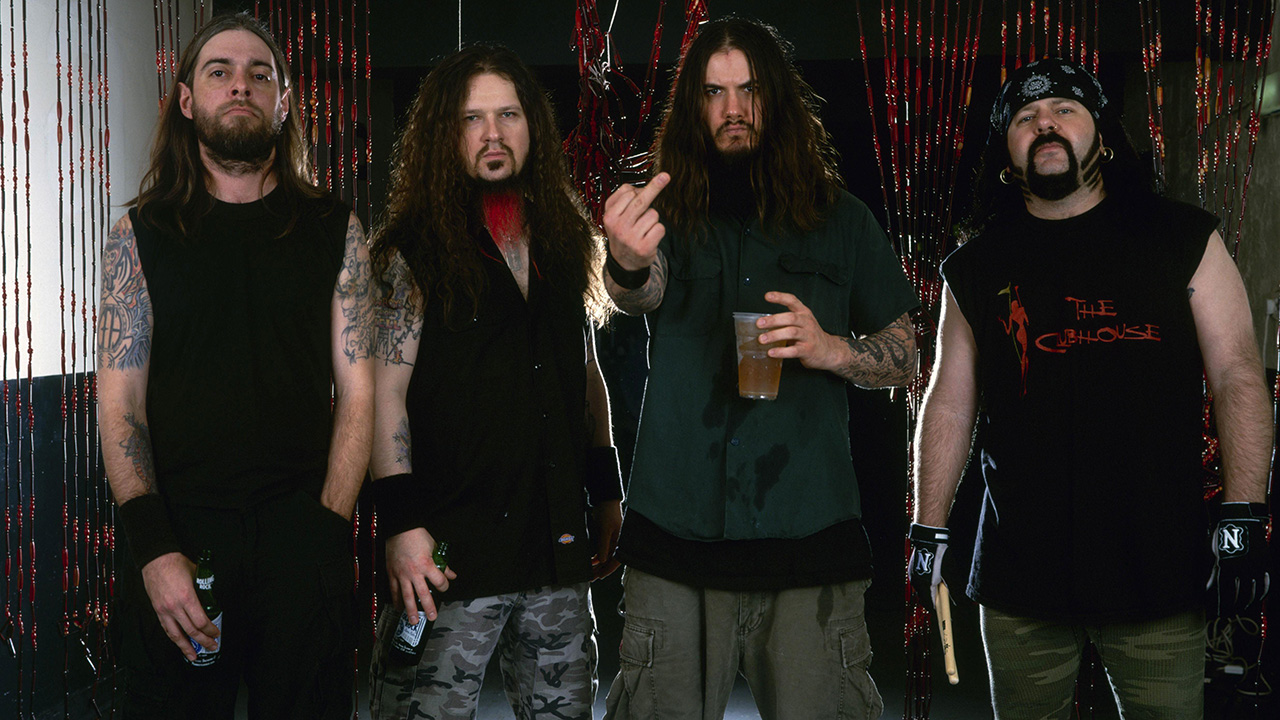 Having been a fan of Pantera for years, it wasn’t until March of 1993 that I was able to see them for the first time at the Tower Theater in Upper Darby, PA, right outside of Philadelphia. A late-season blizzard had postponed the show, one in a victory lap for Vulgar Display of Power, and stranded the rising metal group in town for three days. The audience – and the band – were ready to explode by the time the gig finally went off three days later.

Frontman Phil Anselmo announced that if one person was ejected for stage-diving, the show would be over. Cue the proverbial opening of the floodgates; the first three rows of bolted down seats in front of the stage were ripped out, as documented in the home video from that period, the Vulgar Video. Those seats wouldn’t be replaced until almost a decade later.

The amount of fans onstage during the encore of “Cowboys from Hell” almost caused it to collapse. Massive speakers positioned at the side of the stage almost tumbled into the audience as stage-diving from atop them caused wobbly moments, with security and the local crew frantically trying to keep disaster from happening.

My friend Bruno had feigned sickness that day from work and spent the afternoon getting the Pantera road crew high in exchange for a ticket and one backstage pass. He convinced me to stay and we did this palm and pass thing when security came out to inspect our credentials before letting us in the hallowed area.

Once backstage, Bruno disappeared, and I shifted uneasily while a local, old head DJ babbled on mercilessly about seeing Emerson, Lake and Palmer in the late seventies and how, “That was some rock and roll.” I turned my back on him, waiting for something to happen, and hoping it did before there was another examination of the passes — of which at that point I wasn’t in possession.

The road crew brought out cases upon cases of beer for everyone to drink, but nervousness at getting thrown out and the fact that the choices were cans of Piels and Coors Light had me borderline nauseous. This was the first time I had even considered getting backstage, it was a completely foreign turn of events.

“Aren’t you gonna have a beer man?” I heard from what I assumed was the dinosaur DJ behind me.

“Hell man — then why don’t you have one of these suckers!”

I turned around, and there was Diamond Darrell holding out to me his very own bottle of Heineken.

And that, in a nutshell was Darrell; if you weren’t having a good time, he was going to make damn sure you would be – even giving you his own stash of the good stuff. It didn’t matter if you were the opening band, a record executive or some snot nosed kid who snuck his way backstage. His personality larger than life, generosity unmatched and love of a good time enough to lift the spirits of an entire room.

The tragic events that took place 10 years ago today at a performance by Damageplan, Darrell’s post-Pantera outfit, are just as shocking now as it was then. Felled by an assassin’s bullet to the head, it was even more horrific than John Lennon’s murder, which took place 24 years prior to the day, because it was done in front of an entire audience, including his brother Vinnie Paul, on the drumkit behind him watching it play out.

Vulgar Display of Power was Pantera’s third record with Anselmo on vocals, and it is still recognized as one of the best front-to-back metal recordings, having filled the void left by a suddenly radio and MTV-friendly Metallica, and putting them into an echelon of arena filling acts that no one else in the genre was capable. The group toured relentlessly, documenting back and forth treks across the States, to Japan and Russia on a simple camcorder, which they parlayed backstage antics and hilarity into ridiculously entertaining home video releases. Dime was responsible for directing the non-stop filming and his sense of humor, both bathroom and childlike, along with an innate ability to capture it on tape is unrivaled to present day.

Just over a year after I had gotten backstage, Pantera returned to the Tower Theater for the opening date of the tour for Far Beyond Driven. In the time in-between, I had decided rock and roll journalism was where it was at, and the night before the show, I went down to the venue to see if I could catch sound check and maybe even land an interview. That week, I dropped $75 on a microcassette recorder, and figured it would be a cakewalk to use it. Still a clueless teenage, I figured this guerilla type of reportage was how it was done.

In an alleyway that led to the back of the theater, on an old loading-dock door that hadn’t been used in years, there was a mail slot that opened to a direct view of the stage, where the band was going through some of the new songs. Anselmo was absent, leaving the Darrell, now rechristened as “Dimebag,” on vocals. After a toast to a successful tour with a shot of Black Tooth Grin (a shot of Crown with a splash of Coke), the band called it a night and made for the exit.

Another friend, Jack, who had been tossed by security the last time before we even came up with the aftershow strategy, was going to do whatever it took to get backstage this time around, and he accompanied me on the interview quest.

Dime had had more than one (or six) Black Tooths, and he was feeling better than good when the band finally came out of the venue’s main entrance. Jack and I were the only ones on the street, as it was now deep into the next morning. When Darrell came out, I shoved the recorder in his face while Jack started peppering him with questions.

“Why are you opening the tour in Philly? What do you think about the Tower leaving the floor without seats since last time you were here? Where’s Phil?”

Dimebag plucked the recorder from my hand and started speaking into it. Half of it was unintelligible, guttural growling and the other a mish-mash of words we would later learn was classic “Dimespeak.”

“I can’t do this!” Dime announced, and made like he was going to throw the recorder against the wall. “It’s gonna go!” He yelled with a mile-wide grin.

For what seemed like forever, he teased throwing it against the Tower facade or the brick wall across the street before finally getting solemn.

“Seriously dude,” he said. “I gotta break this – and I want it on film, and I’m gonna put it in the next home video, and I’ll give you whatever you want for it.”

“And backstage passes for tomorrow night,” I added.

“And tickets!” piped in Jack, though we had bought ours weeks ago.

“Done and double done,” answered Dimebag after Grady gave me the money. “Now can we smash this thing?”

Darrell threw the tape recorder against the brick wall — twice — and I have to hand it to RadioShack, the thing was barely scratched. At that point, Dime decided that he was going to place it under the front wheel of the tour bus. He set up the shot, had the driver back up the bus and slowly creep over the recorder. When it finally exploded, splaying bits of plastic and metal pieces everywhere, Darrell jumped about gleefully, shouting “Now that’s what I’m talkin’ about!” The police showed up at that very moment and ordered us all out of the street or we’d all be arrested for disturbing the peace. Darrell picked up a scrap of cardboard, literally out of the gutter, scribbled my name and what he was supposed to leave at the will-call window the following night, gave us a firm handshake, and got on the bus.

Jack and I looked at each other as the bus pulled away. A wasted Dime had written the information a scrap of cardboard from the street. We were most definitely not going backstage.

But there were tickets and passes at will-call the next day, and it was another unforgettable party with Pantera, as they wheeled Marshall stacks backstage after the show and blasted Metallica’s Master of Puppets through them. It was time to celebrate not only the opening date of the tour, but the news that the new album debuted at number one on the Billboard chart, which had blown Pantera away. The two fat guys from opening act Crowbar, desperate for attention, yanked their dicks out and started waving them around before Dimebag jumped in between them, mooned everyone, and let out one of the loudest farts I’d ever heard. He let out a loud whoop, pulled up his pants, and announced it was time for shots of Black Tooth.

That part didn’t make the next home video. My micro-cassette recorder getting crushed did. As I fully immersed myself in music journalism in the following years, I interviewed Pantera and its surviving members on numerous occasions, including recent years as they’ve moved onto other musical projects.

My friend Bruno, who convinced me to go backstage with him in 1993, was shot in the head at point blank range and killed in 2002. Dimebag Darrell suffered the same fate two years later. But it’s all those preceding memories that will live on forever, stronger than all.