Been all about Toronto bands lately, from the sweaty punk blitz of METZ to Parallels’ glitzy dance floor dominance to the ’90s alt-rock smile of the C’Mons. Clearly this upturn in the Canadian city’s music scene can be attributed to the Blue Jays going back to their classic logo last season, and now indie band The Box Tiger, the best Ontario export since the Leafs handed our city two choice draft picks for Phil Kessel arrives tomorrow night at T.T. The Bear’s Place just in time for sooth those pesky Rumble withdrawals.

The Box Tiger have been around since the dark days of the Jays wearing black tops (that’s 2009), but this latest single, “Knives,” grooves with the urgency of Alex Anthopoulos on the waiver wire. It’s a nice guitar-rock throbber that should sound even more alluring live on stage, where singer/guitarist Sonia Sturino hold court.

Knives (Single) by The Box Tiger

Usually a band like this would be enough to get us out of the house on a Tuesday night, but the bill is rounded out by some local Vanya faves in power-pop bouncers The Susan Constant (one of my Best New Bands of 2013 in the now-murdered Boston Phoenix), and Sinnet, who also have a tasty new track ready for quench our collective dry thirst for gravelly indie-pop. I’ve been a fan of Aaron Spransy earlier songwriting work, most notably 2011’s Midwest Manners, so it’s good to have some new tunes from him and his now-rounded-out ensemble.

Year of the Whale by Sinnet

Again, great bill all around, and a solid way to close out April. Doors at 8:30, there’s an $8 cover, and it’s an Indie Rock Ranger gig. Here’s the Box Tiger tour poster, but don’t spent too much time looking at it, because many of these dates have passed. Sorry. 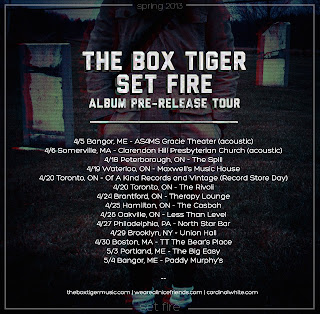