I was giving an interview to WBUR Tuesday evening when I made some variation of the following comment: “Some of us are doctors, some of us are counselors, some of us aren’t. I’m involved with the music scene, and what I do is music.” We were just about to open doors at TT The Bear’s Place in Cambridge, a room Richard Bouchard and I secured just five hours earlier, to host a benefit show for the victim’s of Monday’s Boston Marathon bombing.

And already the response was overwhelming. 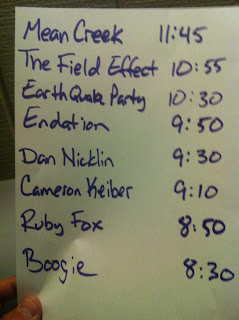 The venue, TTs, donated the room, and its owner, Bonnie Bouley, an additional $500 contribution. Bartenders donated all their tips, more than $1300. All merch sold from the bands was donated to the cause, almost $300. And a raffle — which featured everything from Red Sox tickets to gift cards to an online class at Berklee — brought in more than $950.

At the door, we set up a Pay What You Can system: anything from $1 to more, handled anonymously. The door man said he noticed many people quietly stuffing $20 bills into the donation box. Incredible.

Yesterday, Richard and I brought a check for $7,740 to Mass General Hospital, and donated it to MGH’s Emergency Medicine Fund, which they said would have the most impact on Monday’s events. The check was signed, “from the “Boston Music Scene.”