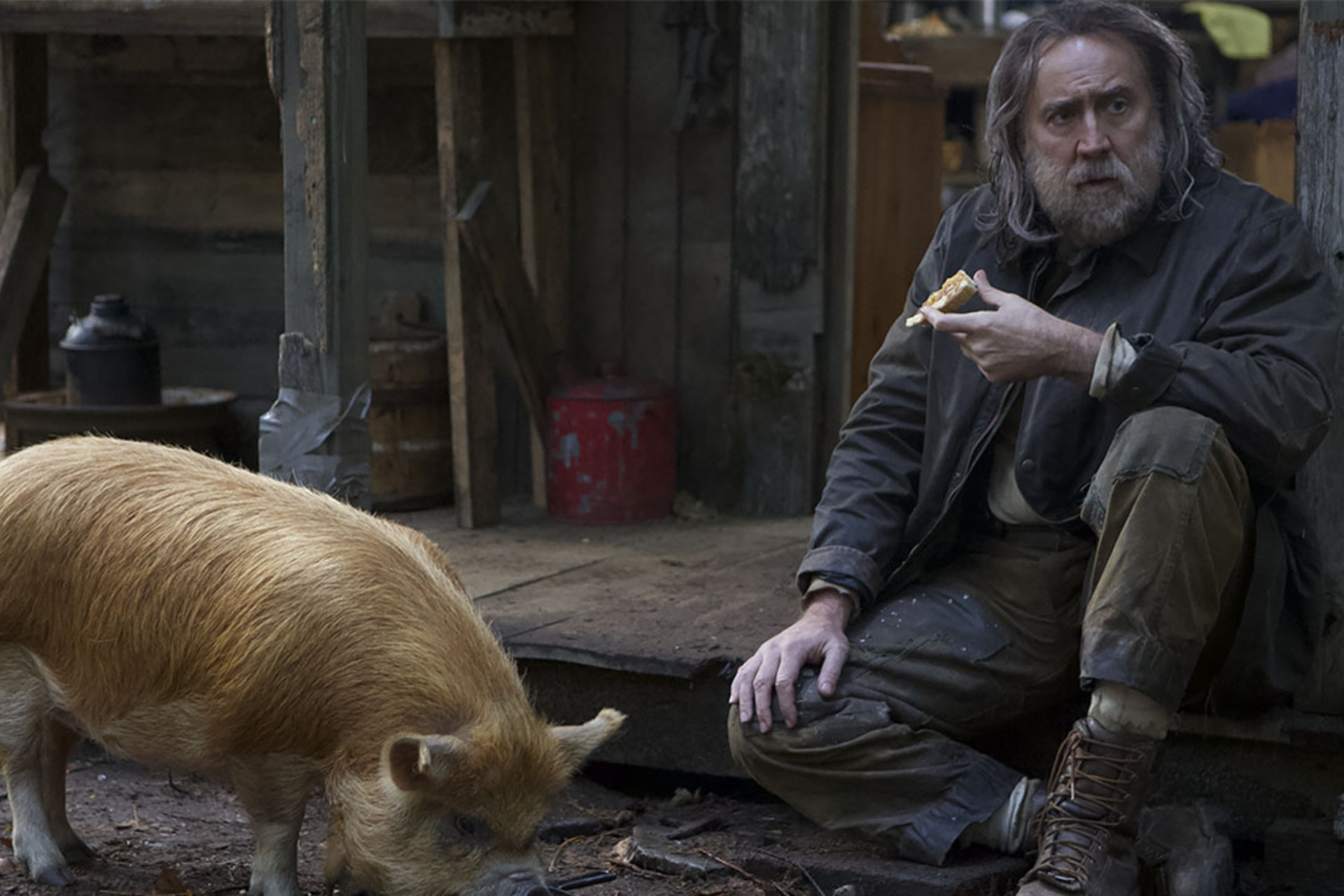 Michael Sarnoski’s Pig is the kind of wonderful out-of-left-field surprise that emerges every so often from certain corners of the American indie scene, where a previously unknown filmmaker just comes out of the gate throwing emotional haymakers, ruining an audience’s evening in the best and most soul-enriching ways possible. It’s how I imagine people must have felt after they walked out of George Washington or River of Grass must have felt in prior decades, gut-punched and raw, in awe of a new talent declaring itself to the world. Sarnoski takes an irresistible logline — a truffle hunter (Nicolas Cage, the greatest) in the wilderness near Portland has his beloved truffle pig stolen from him in the middle of the night, and he enlists the help of his buyer (Nat Wolff) in getting it back from whatever assholes did the pig-napping — and transforms it into something genuinely meaningful, defying the conventions of his premise at every turn in favor of emotional truth. It’s not a slog to watch by any means, but I think you might be unprepared for just how hard this movie hits, especially in an era where “trauma” has become a way to suggest meaning within thinly-sketched characters.

I genuinely don’t envy the task that Neon had in trying to market this movie, because there’s no good way for someone to sell it to another without either being shamefully reductive or wholly dishonest (one of my first thoughts upon walking out of the theater was “God, I hope they didn’t try to sell this as John Wick, because they’ll get sued like Nicolas Winding Refn did after Drive“), and, as such, my analysis will be similarly limited because I’d like to preserve some of the surprises for you as well. What I will say is that this is one of the great modern Food movies, and I would not be surprised to see allusions to it pop up in culinary culture over the next few years in the same way that certain cooking-adjacent films tend to inspire other creative gastronomists to get to work (see the effect of something like Chef on the creation of Binging With Babish). It’s about our authentic relationships to the food we eat and the emotions and memories that come along with any given meal — think Ratatouille, but imbued with a deeper sense of melancholy — but, crucially, it lets you make many of these connections yourself, with that Reichartian sparseness (a feature that also owes, somewhat, to the film’s setting, which places the Northwestern wilderness in conflict with the developed world of Portland) allowing for enough space for the viewer to think. The easiest way, perhaps, is to remark about how great Cage is, and though he certainly is, the entire ensemble, including Wolff and Adam Arkin, is superlative.

Someone after the screening remarked that it would have been the kind of movie that Anthony Bourdain would have loved had he been around to see it, and, I couldn’t have agreed more with them. Indeed, it’s a crushing irony that Pig will hit theaters on the same day that a glossy documentary about the Kitchen Confidential icon — one that’s already receiving heaps of shit from media ethicists for using artificially-constructed “recordings” of Bourdain’s voice in its narration — will as well, and that film will, perhaps, steal screens away from this considerably-smaller enterprise. There’s something to be said for the contrast between this honest fiction, which is a unique perspective on feelings that we all can relate to, and the dishonesty of a documentary that aims for a similar meaning. All I know is that this is one of the best films released so far this year, and I imagine I’ll think of it often, especially in moments where I’m cooking, like, say, when I toil over a cast-iron skillet making a tart to eat with loved ones. As those moments become oft-remembered memories, I imagine I’ll find Pig even more relevant, and the melancholy nature of the film and those reminiscences will swirl together, the experiences becoming even more potent, enriched in a method that only great art can endow them with.