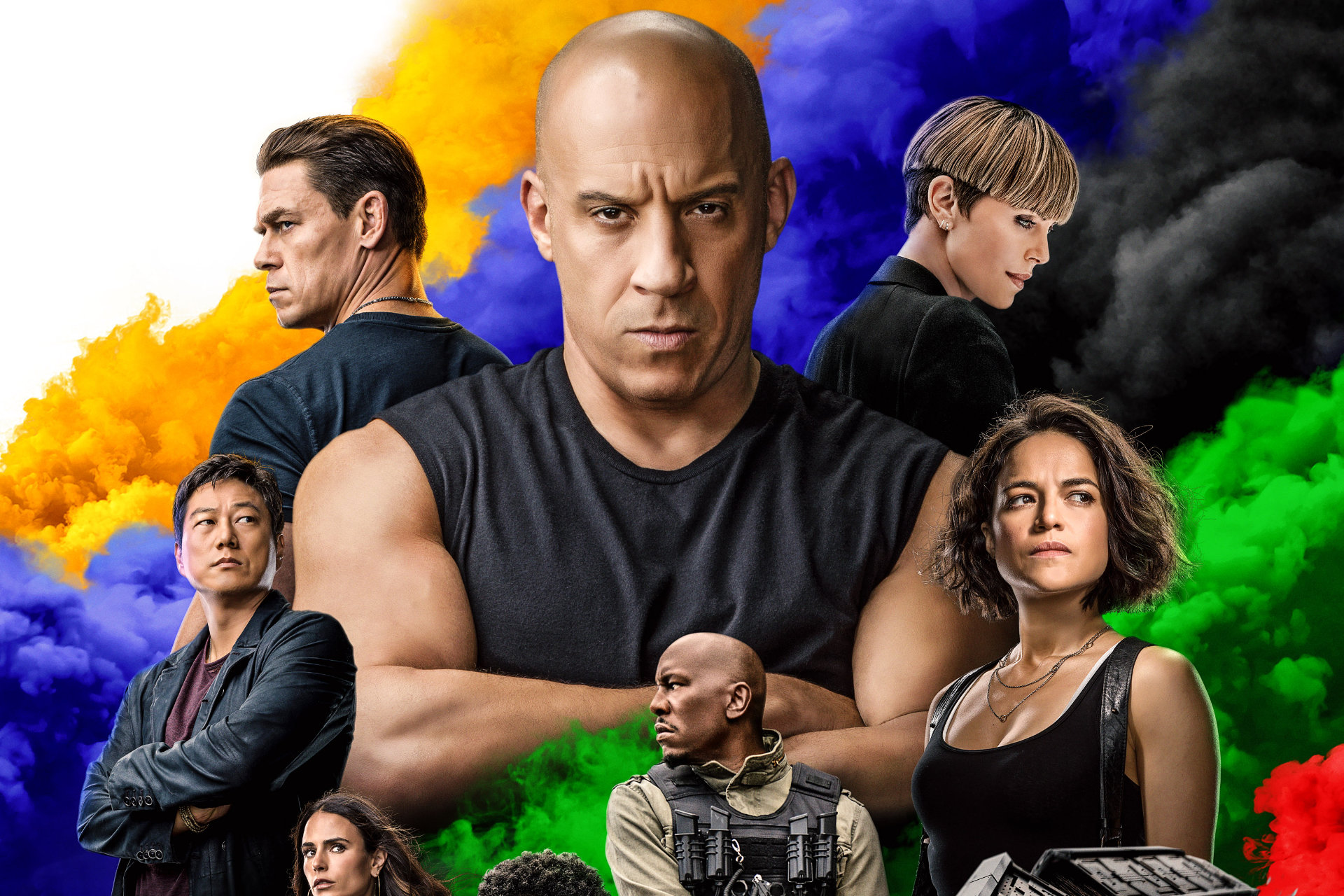 In terms of internal tonal and thematic consistency, there’s only one major franchise that can really be compared to the bizarre — and ludicrously entertaining — Fast and Furious series, which has now spawned nine main-line movies, a poorly received spin-off, an animated kids’ cartoon, and any number of goofy-ass tie-in products. That, of course, is James Bond, which has survived the transition from seriousness to camp to gritty seriousness to ludicrous camp and back to po-faced dramatics (with knowing winks at how unserious it all is) over the 50-something years it has been a mainstay of the modern blockbuster film scene. There’s a weird sort of symmetry to the rise of both franchises in the current era: as Bond shifted back into the gritty Daniel Craig era with Casino Royale in 2006, Fast and Furious began its liberation from the semi-realistic trappings of early-aughts action-thrillers with Justin Lin’s Tokyo Drift, a stylized and openly goofy entry that was initially viewed as dumb bullshit made for dumb people before the critical establishment pulled its head out of its ass in 2011 and realized that these movies were perfectly fun entertainments in their own right. It makes a certain kind of sense that Lin would return for F9, the best entry since Fast Five in the franchise’s modern form, which I’ve come to call the “Roger Moore era” of the Fast and Furious series, as it retains and reminds what, specifically, he brings to the franchise, and how much the endeavor suffers without him.

First and foremost, Lin has always been an excellent director of ensemble casts: one need only look to his pre-F&F success with Better Luck Tomorrow for an example of that outside of the confines of Hollywood (and the successful integration of his indie career into the mainstream), or to his sturdy blockbuster craftsmanship in Star Trek Beyond, which might actually be the best entry in the Abrams era of that particular franchise. Other accomplished directors like James Wan and F. Gary Gray have tried and failed to replicate the formula that he perfected within the confines of this franchise, and they simply don’t have whatever secret sauce Lin fills up the cast’s water bottles with every morning. Perhaps it’s because he, alongside series writer Chris Morgan (who didn’t pen this installment, however), is responsible for making the franchise the behemoth is today, and his touch is now embedded in the DNA of the sprawling soap opera that is the saga of Dominic Toretto (Vin Diesel) and his family. Like a wittier Kevin Feige, he understands what audiences want from the famous faces that fill out his casts: he plays to each actor’s strengths, and crafts characters that distill their on-screen essences down to the essentials and that allows for them to become the perfect compliments to one another in the Long Island Ice Tea that these films are. The only difference is that this, unlike that infamous cocktail, goes down reasonably easily, but it’ll still get you drunk — on a kind of Hollywood charisma that’s in short supply these days.

One only needs to view how gracefully he handles one of the dumbest twists in any given franchise film in the past decade, which is nearly on par with the one in Spectre in terms of its outright intelligence-insulting ludicrousness. That, of course, refers to the arrival of Dom’s estranged and long-lost brother Jakob (John Cena), a superspy looking for a world-ending weapon. This is the kind of series-altering retcon that normally pisses off fans of telenovelas, comic books, and sitcoms, and, understandably, it filled some viewers with dread. It was extremely likely that Jakob would turn out to be a Cousin Oliver-style replacement for The Rock, another WWE superstar’s ass for Diesel to kick and to then notch off on his bedpost, and his appearance here smelt mightily of being a retread of the kind of “evil Toretto” bullshit we saw in The Fate of the Furious. But in Lin’s hands, it becomes something reasonably affecting, and the story of their split, told mainly through flashbacks (in which Lin wisely opts to just cast younger actors* instead of digitally de-aging Diesel and Cena), forms the emotional core of F9. The Roger Moore Era has taken the emphasis on family — which started, in my opinion, with Lin’s third entry in the series — and turned it into the most interesting vector for conflict. Five was about the formation of a family, Six was about divorce, Furious 7 was about vengeance as much as it was about moving on and healing, Fate was about grief and alienation and how our loved ones can pull us out of a spiral, and, now, F9 is about the deep-seated hurt between brothers that can come from their different perspectives on a shared tragedy.

But, after all this serious talk, I probably should remind you that this, after all, is a Fast and Furious movie. It isn’t the stuffy drama typical of modern Shakespeare black-tie affairs, it’s of the same stuff that would have delighted the tomato-throwing, beer-swilling, meat-pie munching, loud-ass audiences that came to the Globe every night — an intensely populist entertainment well of its era. And, boy, is it a good time to watch unfold. Lin’s main talent as an action director is that he competes with himself to see what crazy shit he can get away with, raising his ante with each passing film, and though he’s never quite equaled the finale of Fast Five, which remains one of the centerpieces on the banquet table of modern blockbuster action filmmaking, he always tries his best to top it. He comes awfully fucking close once or twice here in sequences involving powerful car-mounted magnets that wreak chaos on various European city centers, which is comparable in terms of its smashed-car destruction, but lacks the surreal impact that watching a giant safe roll around the streets of Rio attached by cable to two suped-up cars had back in 2011. We’ll always be chasing that high, and we’ll probably never get there again, at least in this form, but it’s nice to know his appetite for mayhem hasn’t changed even after taking a seven-year hiatus from the series. And, yes, two members of the gang finally get to Film Twitter’s most-demanded locale that the franchise hasn’t reached just yet: outer space. Yes, you most likely saw this coming from the trailers, but it’s still fun in practice, as is the rest of the film.

That is, perhaps, why the discourse surrounding F9 has seemed so muted and disappointed: to complete the Bond parallel, this is this franchise’s Moonraker, if that film had attempted earnestness as well as goofy, fantastic spectacle. The delay, of course, didn’t help, giving film nerds and action fans a full year to imagine the movie in their heads, since the plot of the film was already spelled out for them in the absurdly-long four-minute trailers that Universal decided to market the film with, but there may be a sense that the final frontier has been reached, the last demand fulfilled, and some have been left wanting by the realization of what they wanted, much like a dog catching a car. This, in some respects, is the danger of giving into fan desire — no matter how much you want to, you’re never going to be able to give all of the people everything they want — but it also feels as if a trap was set for the production in the process, akin to how a group of mean girls at your high school might have told you to wear a top that they privately tell you “looks good,” only to call you a fucking idiot and a loser for dressing that way when you finally strut your way to the cafeteria expecting their validation. However, the awkward handshake between the Fast and Furious franchise and the critics who semi-ironically (or passionately!) love the series has always been tenuous, a union that could be dissolved at any time by a shift in the film’s tonal poles from the action-oriented to the character-oriented or one found in the change or return of a given director. With F9, Fast and Furious returns to the roots of what made its modern iteration so potent to audiences — earnest, if ridiculous, family drama complemented by bombastic, amusing action — while amping up the campy thrills. It is what each of these movies have always been, regardless of whether or not it was in critical favor: a delightful, endearing mess.

*Special mention should go to Vinnie Bennett and Finn Cole, the actors who play young Dom and Jakob, who do a really solid job in incredibly thankless roles, and whose final scene together is… genuinely moving?