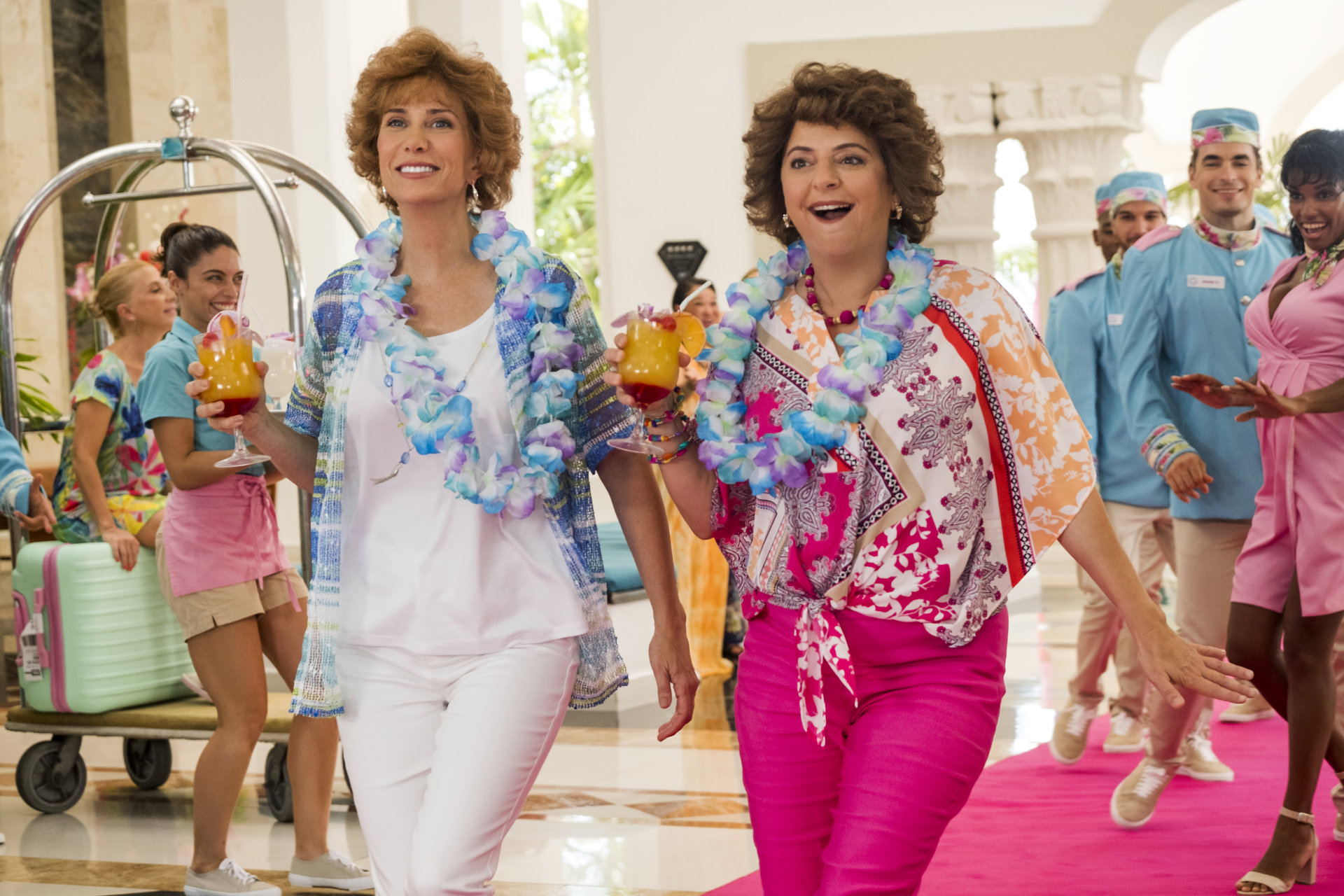 It’s tempting to make this review of Josh Greenbaum’s Barb and Star Go to Vista Del Mar a list of every gag that made me laugh in the course of its 107-minute runtime, but there are two reasons why I won’t. One, I want you to be able to experience this wonderful film untainted by my half-hearted recollection of various jokes. Two, it would far exceed any reasonable article length, and I assume you don’t have the patience to go through an 8,000-word recitation of jokes when you could just watch the damn movie. And you absolutely should, as soon as humanly possible: Co-writers and stars Kristen Wiig and Annie Mumulo have crafted, in making their follow-up to Bridesmaids, a nearly wholly unique comedy that is both absolutely self-indulgent and utterly delightful. It’s the kind of batshit studio comedy which, like Halley’s Comet, comes along once every few years and wows those lucky enough to see it, and it will inspire a legion of cultists to stoke the embers of its memory for generations to come, much as they did for MacGruber and They Came Together in recent years.

So, what is Barb and Star about, exactly? Well, on one level, it’s about a pair of permed-up divorcees and delightful goobers named Barb (Mumulo) and Star (Wiig), who head out from their small town of Soft Rock, Nebraska, to go to Vista Del Mar, and the various mishaps and situations that they find themselves in, culottes and knick-knacks and cocktails and all. On another it’s about a self-styled supervillain who wants to unleash a horrible plot upon the people of Vista Del Mar to right a wrong she believes has been committed against her, and her lovesick agent (Jamie Dornan) that she sends to carry out the particulars of her mission in advance of her big day. Of course their paths will cross, and genuine hi-jinks will be had. That’s it. That’s all you’re getting from me. Hell, I feel like I already told you too much, given that the trailer went out its way to try and conceal Barb and Star’s faces up until release date. Just know that it goes to places expected and unexpected, and that I thoroughly enjoyed my time with it.

Why? Well, Mumulo and Wiig are picture-perfect compliments to one another, both on-screen when performing together and as co-writers, and the film would not work if any other personalities were in charge of it. They have a way of softening some of the harsher attitudes toward their characters (I can see a number of dudes, yes, dudes who will be turned off by their introduction and will ultimately be won over by the very end of it) without diluting what makes them any special: their earnest good-naturedness and goofballery, their deep-seated love for one another. It’s clear from the get-go how enamored the creators are of their creations — a stirring and weirdly moving ideal of female friendship is presented to us in these characters, which eventually conquers all that comes in its way. And, chiefly, they’re able to present to us the hyper-absurdist world of the film as an environment in which we would see these characters (and Dornan’s, whose work here is further proof that this most recent crop of heartthrob has a better sense of self and humor than a large number of their predecessors) thrive, a Florida that resides, almost exclusively, in the heart of one James Buffett.

Greenbaum, a director who has typically worked as a documentarian or in television, directs the hell out of this and gives the film a distinctive look (a welcome contrast to the typically stolid state of studio comedy) that’s part Lisa Frank fever dream, part cocktail shrimp buffet, part plastic pink flamingo, part sunscreen-stained Tommy Bahama polo shirt. He switches effortlessly with the scenarios presented to him by Mumulo and Wiig, be it a plotting session in a Bond-style villain’s lair, buried deep underground, to a hotel lobby, draped in garish pastels, where the staff greets you by performing a musical number. Even better is his understanding of the pair’s flow: The jokes never feel clipped or rushed, and, in true passion project fashion, there’s a ton of them that might, potentially, had been left on the cutting room floor had someone with more “oversight” been involved. But that’s the beauty of Barb and Star: it feels like it was meant to make the people making it, all the way from the lowliest grip to Greenbaum himself, break, and it feels wholly uncompromised in the fashion that the best and most beloved comedies are often remembered for.

But that’s one area where I think Barb and Star has a real chance of avoiding some of the pitfalls of their predecessors: Thanks to its release on VOD, it will never be tainted with the label “bomb,” given that we’ll probably never know how much money the movie made. There will not be the uphill battle to counter that initial skepticism that typically comes with these cult curios — there will always be some people who refuse to see MacGruber because it’s an SNL movie and a failure, or Land of the Lost because it’s a goofy riff on a kid’s television show that is very much not intended for children, but a lot of otherwise-willing viewers are scared off because wide-release comedy often has to be successful to be considered worthy of attention (it’s one of the reasons you will very rarely ever see true comedies nominated for awards outside of their category at The Golden Globes — it’s hard to take funny business seriously and deep it as worth as the in-vogue tragedy of the day). So, this is to say: you have the chance, beginning today, to witness a comedy classic at the precise moments of its release, and I highly recommend you get on the ground floor so you can brag about it wistfully to eager younger film nerds in 20 years’ time like folks do when they talk about having seen Blade Runner in its original theatrical run.