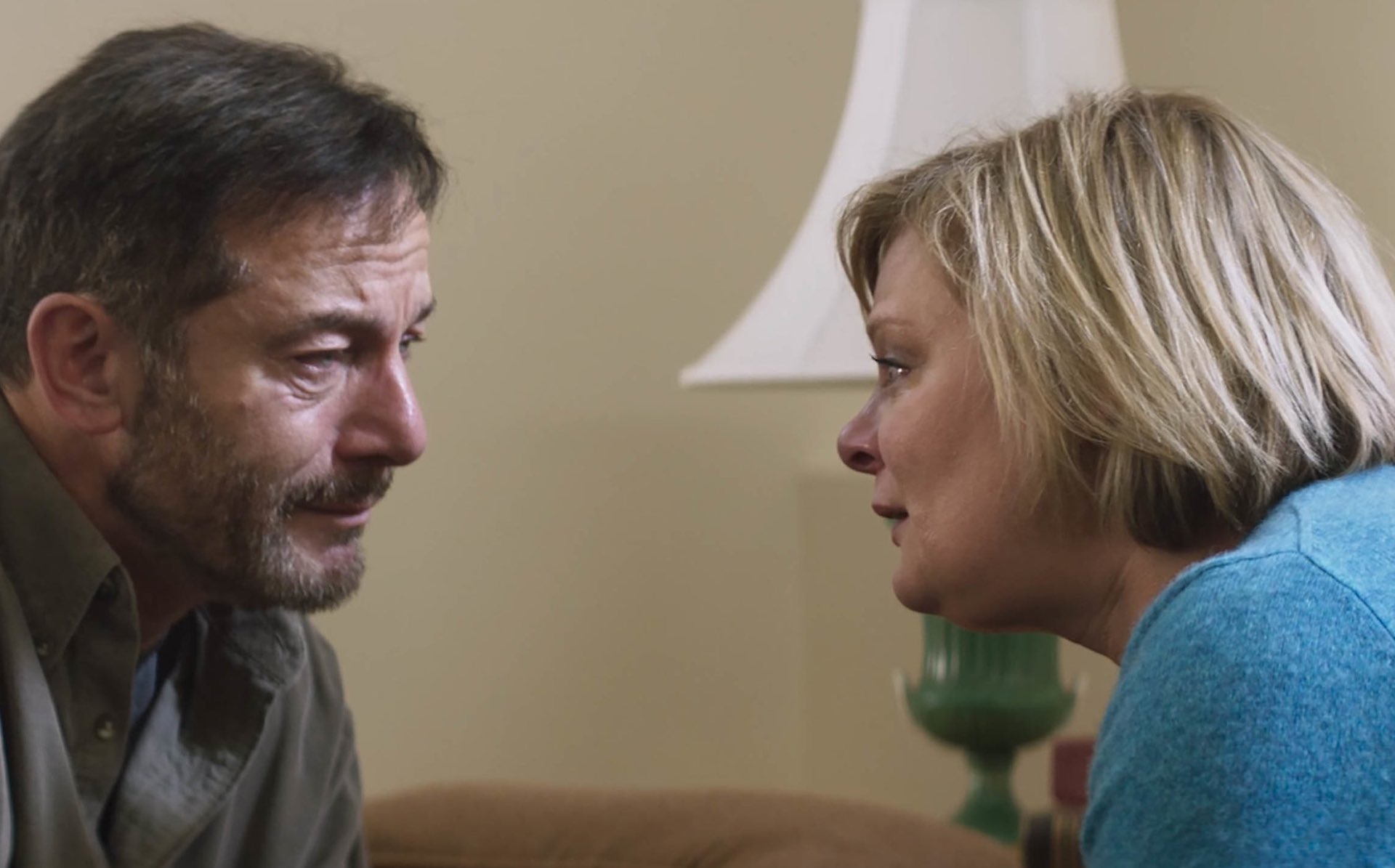 It takes a good while for the conflict at the heart of Fran Kranz’s new drama Mass to come to the forefront, as it is buried behind the nervousness and politeness of the four people at its core. Two couples have arrived at a small-town church, and taken their seats at a folding table in one of the archetypal white-walled Sunday school rooms, whose windows are covered in children’s colorful interpretations of stained-glass. Each of them has suffered and shared a world-collapsing tragedy, though they’re on opposite sides of the divide: Pain-stricken activist Jay (Jason Isaacs) and his reserved yet stern wife Gail (Martha Plimpton) are there to seek answers and, perhaps, retribution, while the stiff Richard (Reed Birney) and the oddly soothing Linda (Ann Dowd) look to provide them with whatever they need, to the best that their consciences will allow them to do in the course of their conversation. Kranz and company have gone out of their way to preserve the subject matter of the film, and I will honor their request and not spoil any of that here, so that the revelation may shock you in the same way it shocked me, but as their conversation continues, it ebbs and flows through sensitive estuaries into an open sea of seemingly endless grief.

Kranz’s style, at least when it comes to the meat of the film, is a solid complement to his performers, perhaps because of his time in front of the camera. He rarely crowds their performances with his judicious editing and is willing to let a moment hang in the air simply so he can observe the totality of its effect upon his characters. He knows that his core cast — primarily composed of the underserved-yet-beloved character actors like Dowd and Isaacs, who, while they are recognizable to casual viewers from other roles in more mainstream fare, hold special spots in the hearts of contemporary film nerds — is his strongest asset, and he wisely gives them the space they need. And, as such, Mass is often incredibly compelling and powerful, and his screenplay gives them a veritable buffet of choice moments, a sort of Brazilian steakhouse approach to the serving of jabs, anecdotes, and defense-shattering revelations, and each performer grabs a heaping plate. However, his framing device, in which we follow a church employee (Breeda Wool) and the mediator (Michelle N. Carter) as they prepare for the meeting, is less successful: it drags out the film’s introduction and conclusion, making it especially annoying while the subject of the film’s central conflict remains shrouded in mystery.

Even with those issues, Mass is, perhaps, the best possible film that it could be, and I say that not to damn it with faint praise: It is smartly-written, handsomely-lensed, and gorgeously acted, but I think it lacks some of the punch that it would have had on the stage, had it found a home there instead. There’s a certain amount of “psychic distance” afforded to viewers watching performances like these at home, on the couch, or in a cinema — the former is not ideal at all for afflicting the kind of emotional awkwardness upon those watching that it might in a cinema, where, at the very least, you are surrounded by the obvious emotions (or lack thereof) of those strangers sitting alongside you in the dark. But, as I’m sure you’re well aware, theater removes the final barrier between performer and viewer: The actor contributes something to the air as well, and a heated shout, instead of being capped by an audio technician so it doesn’t blow out a surround sound speaker system or sound bar, can feel like it’ll carry across the alleyway next to the theater and into the restaurant next door. That, I think, is the emotional space that Kranz wants Mass to occupy, and I hope he makes a version of this script suited for that environment after this iteration finds an audience.