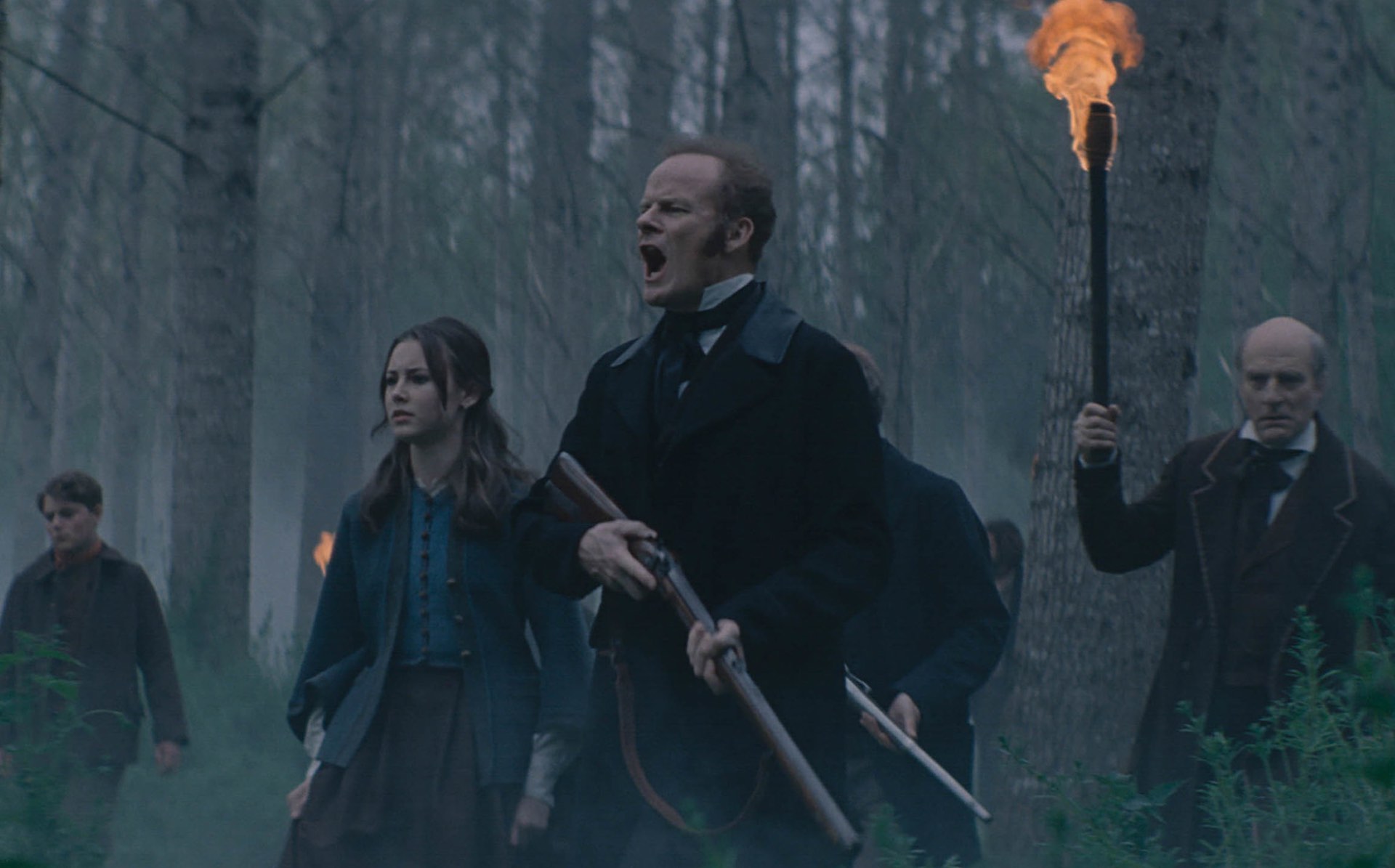 Around 20 minutes into Sean Ellis’ new werewolf horror-epic Eight for Silver, a man is mounted on to a makeshift crucifix, has his hands and feet severed, and his shirt and pants stuffed with straw. He, a Rom whose caravan has been utterly annihilated by a group of late-19th century French landowners even though the Romani had a claim to the land, is then left to rot in the sun. Beneath him, a woman is buried alive, clutching a talisman she had made when she had foreseen the raid a day or two earlier. Said talisman is a set of dentures, fitted with Wolfen silver teeth, ready and waiting for someone to put them on. Days later, after the entire outpost’s dreams have been infected by haunting visions of the scarecrow man and the teeth buried in the soil, a child seeks them out and puts on the dentures.

Something in him turns, and he bites another one of the kids nearby, who happens to be the son of the settlement’s governor. After a night of fevered illness, the child disappears, and the governor enlists a pathologist, James McBride (Boyd Holbrook), to find his son and cure him. But the kid’s no longer human — he’s a werewolf, here to avenge the deaths of the Romani people slaughtered in the raid, and he’s about to spread lycanthropy from person to person like it’s coronavirus at a frat party. Now, if you’re anything like me, you probably made a stank face like your favorite sludge metal band brought back the nasty riff but slower, and I’m happy to report that you’ll probably overlook all the flaws in Eight for Silver and enjoy the hell out of it, especially if you wait until the edibles hit and put on a Tomb Mold record. It’s goofy, broad action-horror with a fun pseudo-Western bent (reappropriating the imagery of cowboys and natives and placing it into this context is an interesting choice, but it mostly works).

You can thank its lead for making it a highly compelling watch. Holbrook is still in badass-in-chief mode, and his character is cut from the same cloth as the one in he played in Shane Black’s underrated The Predator, though it’s firmly stitched to the more investigative aspects of his Narcos character and tie-dyed in shades of Hammer horror icons like Christopher Lee and Peter Cushing. It’s a lot of fun to watch him piece together what’s going on, and it’s also fun to watch him try to place all of this goofy shit into some sort of mystical-scientific context. The “scientific” nature of his inquiry is responsible for the film’s single best moment: An astonishing autopsy scene on one of the werewolves, killed by a trap of spikes he’d laid in the forest, which has great effects and make-up work that strikes shades of Scott and Carpenter without feeling derivative. Hell, there’s even a Jurassic Park riff at that moment as well, and it works like gangbusters.

What doesn’t work are the werewolves themselves, grotesque CGI creations that, according to some on Twitter, were hastily assembled and dropped into the final film after a test audience balked at the practical effects. They’re not particularly intimidating, nor do they feel unique. Remember how I Am Legend ruined Matheson’s cognizant vampire society by turning their bloodsucking freaks into generic zombie-like digital automatons? This cut of Eight for Silver operates with the same sort of mindset: They look like hairless hyenas obsessed with the One Ring, and it’s a massive blunder that threatens the cohesiveness of the film’s aesthetic. On the other hand, there’s an element of charm to them precisely because they are so poorly rendered. It gives the film a sense of being out of its time as if someone found the discarded cans in the basement of some anonymous warehouse next to the films in Magnet’s 2008 Six Shooter Series that were chosen for distribution instead. Eight for Silver is by no means perfect, but it will rip if you let it.