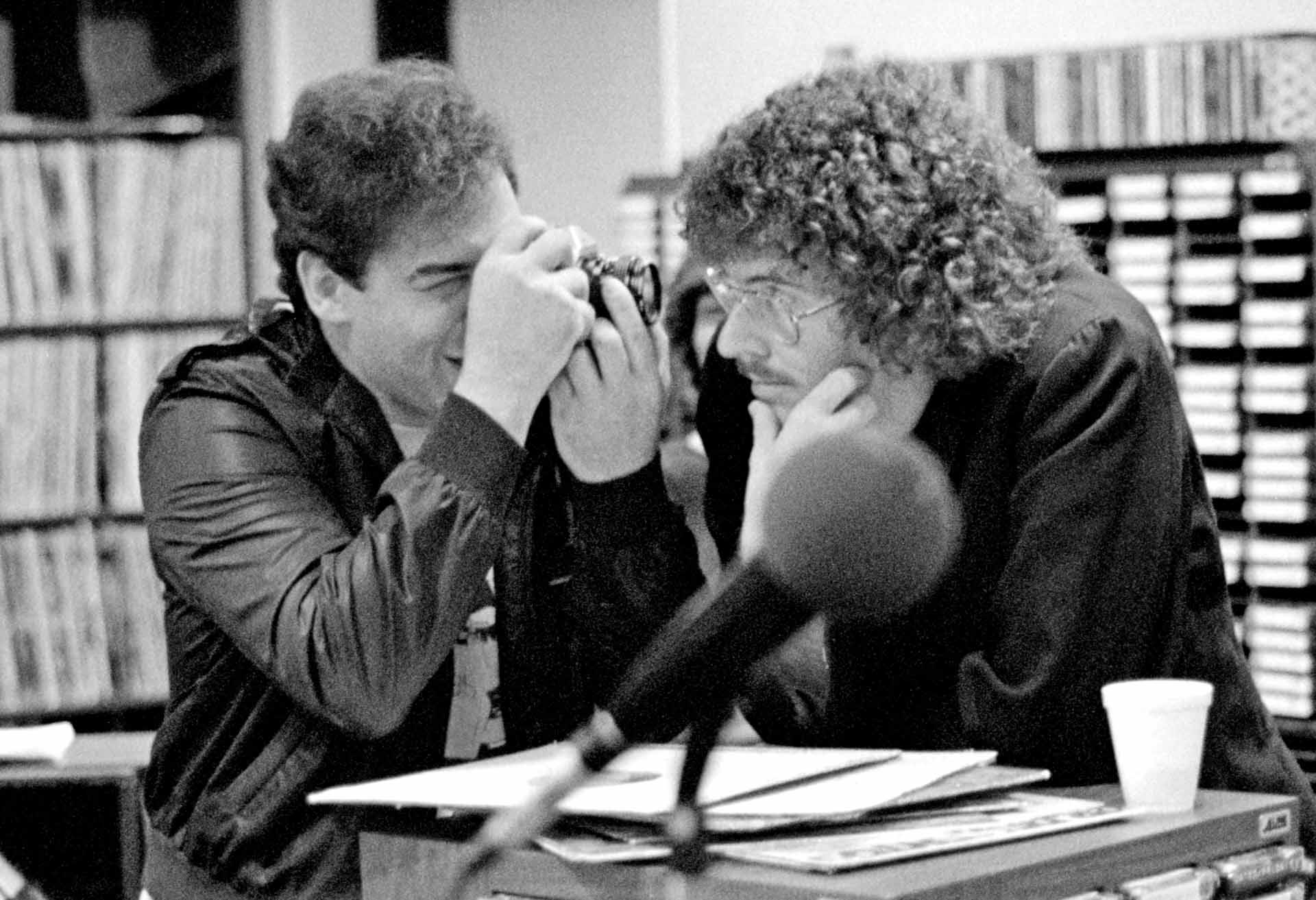 When Jon “Bermuda” Schwartz started taking pictures of the behind-the-scenes happenings of his life working with “Weird Al” Yankovic in the early 1980s, it wasn’t even a thought in his mind that he was actively recording music history. He was merely just playing with his camera. But in hindsight, more than 30 years later, he’s sure glad he did.

With his Al-centric photobook, Black & White & Weird All Over, which hits shelves on Tuesday (November 17), Schwartz is looking forward to delivering a new collector’s item to the dedicated fan base he’s played drums in front of with Yankovic for nearly 40 years. In addition to that, the self-made archivist is excited that he had the chance to unearth some of his favorite photos from the early days of Al, and not only show the dedication he had for documenting the times and his non-musical creative passion, but also the dedication that his “Weird” boss had to his craft, as well.

“Obviously, Al is the selling point on this, because he’s huge, but that’s really the reason I’ve done it. It’s not to show off the fact that I had a bunch of photos that nobody has seen yet,” Schwartz tells Vanyaland. “From events like the ‘Eat It’ video and moments in the studio that were never documented, in black and white anyway, I just thought it would be cool to show those moments. So half of it is because it’s Al, and the other half is that I was smart enough, or rather intrusive enough to always have a camera with me.”

While the book chronicles the behind-the-scenes moments of events like the video shoots for “Ricky,” “I Love Rocky Road” and “Eat It”, as well as studio time during the making of the 1984 smash hit In 3-D, it also largely shows Yankovic in his natural element, from a different perspective. Rarely one to ever reject Schwartz’ “intrusion” with the camera, Yankovic willingly hammed it up in front of the lens, and for that, Schwartz is forever grateful as not only an artist and documentarian, but also as a friend.

“Al was really good about me taking photos. He could’ve told me to quit clowning around, but he played to the camera. Plus, he realized that at that point, a lot of the pictures I took could be useful, because he had already used a bunch of them. The Authorized Al book had already come out by that point in 1985, and he knew I was the guy going around documenting stuff,” says Schwartz. “A lot of guys aren’t that tolerant. A lot of singers go out on the road, and they’re separated from their band, and you don’t talk to them, or take pictures of them, or eat with them, and they travel separately from you, but this was a whole different deal with Al, because he is a nice guy. I have a couple of pictures where he’s kind of over it at that moment, but I have thousands where he’s a willing participant.”

While he’s hoping the decades-long investment into thousands of rolls of film and one-hour photo print shops while touring will be at least partially returned to him through the book’s sales, the project really came about organically, as Schwartz began to convert and digitize his negatives a number of years ago.

After getting the blessing from Yankovic himself, Schwartz started in on putting the book together three years ago. Now, while he could theoretically turn it into a volume series spanning the career of the Weird one, Schwartz is of the feeling that, for nostalgia’s sake, the original black and white nature of the selected photos before the world fully turned to color photography feels more genuine and unique.

“The black and white aspect of the photos is what made me want to shoot them in black and white to begin with,” says Schwartz. “It just has a certain vibe where whether you can identify it or not, it looks different so it has a different feel, and these haven’t been seen before and they’re all from behind-the-scenes. It’s from the perspective of an insider looking in, and that’s what I hope to convey also, is to give the viewer a sense of being there, and a sense of that nostalgia.”

For Schwartz, there are plenty of things that made this project an exciting and worthwhile endeavor. Delivering a treasure trove of eye candy to Yankovic’s loyal fan base and displaying his photographic talent were certainly major factors in his happiness with the project, but his favorite part was just being able to take the trip down memory lane to relive everything as he combed through the archives, and he’s hoping he can, in turn, provide that same whopping dose of nostalgia to the fans, as well.

“This was very nostalgic for me, and of course I’m a fan of Al, but not in the way that the fans are fans,” says Schwartz. “It’s different being on the inside, but I knew that if I dug this perspective, that the fans would love it. What I got out of putting this book together was a just really good feeling about that era. It was the beginning of things taking off, and the record contract, and video and touring. Popularity was growing, and I was becoming as more than just the guy who played on the accordion case, and were being looked at as more than just a comedy band, but the book really brought back a lot of good feelings, and I know it will bring a lot of good feelings back to the fans.”