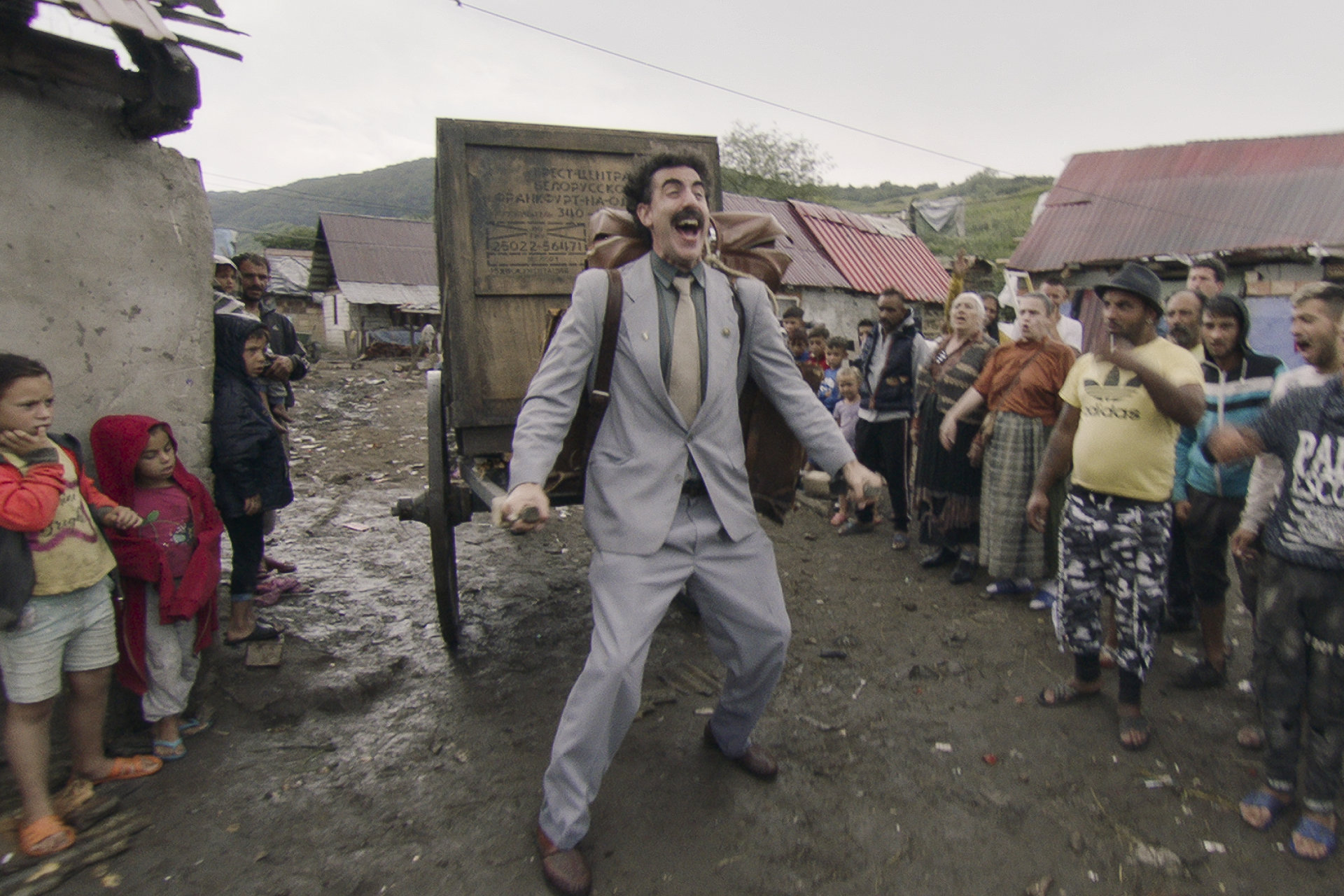 For a certain subset of millennial whose sensibilities lie directly at the center of the comedy nerd/cinephile Venn diagram, watching Borat back in 2006 must have been like what it was to put on Raw Power or Highway 61 Revisited for the first time (The Velvet Underground and Nico, of course, being the Comedians of Comedy series). Sure, those in the know knew the pale-blue-suited thickly-accented reporter from the wildly backward anti-Semitic wasteland of “Kazakhstan” from Da Ali G Show, but most people, especially high schoolers, didn’t. It was a genuine phenomenon, one that burned down the comedy culture that came before it and skyrocketed both the careers of its star, Sacha Baron Cohen and the whole mockumentary genre to new prominence. It was phenomenal cinema that also happened to be incredibly funny, and seeing it with a packed crowd opening weekend was one of the single greatest experiences I had as a high schooler sneaking into R-rated films with my dumb buddies (I think we bought tickets to Flushed Away), cackling away at each gag until we were practically gasping for breath. It curdled after a few weeks once the joke had crossed over from the counterculture and stopped being as funny as it used to be, especially when those who didn’t get it started singing “Throw the Jew Down the Well” without actually understanding who or what they were supposed to be laughing about. Kazakhstan was mad about how they were portrayed and would suffer the indignities of their portrayal for years to come, such as the time when Cohen’s mock national anthem was actually played for Kazakh athletes at a sporting event.

It feels like that type of criticism made its way back to Cohen and stung him appropriately. A combination of cultural omnipresence — most people were aware, at that point, of who Borat was and could recognize him on the street still — and a reluctance to go after the same kind of target caused Cohen, following the floundering of the spiritual sequel Bruno (turns out Americans didn’t really want to examine their own homophobia on a cultural level, at least at that point), to eventually move away from the mockumentary as a whole for a number of years, with terrible results (the less we talk about Grimsby or The Dictator, the better). But he could only resist the lure of activist comedy and filmmaking for so long, and Cohen eventually returned to his old trickster ways. A few years ago he released Who is America?, a long-form television show which saw him get Dick Cheney to sign a waterboarding kit and force the resignation of a Georgia state representative, and now he’s back with Borat Subsequent Moviefilm, a surprisingly great sequel to the original film, which features some truly gut-busting antics as well as a fascinating sort of reckoning for the perceived sins of the original film. You can tell Cohen somewhat misses Larry Charles, his former collaborator behind the camera, but he’s found an even-better on-screen counterpart: Maria Balakova, who plays Borat’s daughter in the film, and is a comic revelation in her own right.

I’m going to do my absolute best to avoid spoiling the best bits for you, and as such, I’ll only reveal things that happen within the first 10 minutes of the film. That’s about as good as a compromise as I can truly get without having to talk around the whole of the plot. So, if you want to go in totally virginal, stop reading here. The movie’s good.

Anyway, it’s been 14 years since Borat Sagdiyev came to America and became a cultural phenomenon on these shores, but his return to Kazakhstan was anything but pleasant. We’re reintroduced to him mining the dirt, bearded-and-crazed, in the gulag where he’s spent much of the last decade. But he’s freed once the government senses an opportunity in the political rise of Donald Trump, noting his friendships with various strongmen dictators and willingness to forgive any measure of human rights abuses. So, the once-famous journalist is tasked with transporting a bribe to Mike Pence (I am going to gloss over the particulars here because they are too funny to reveal), but before he sets out, Borat discovers that he has a daughter, Tutar (Balakova), who spends her days in a cage in “traditional Kazakh fashion,” and she decides to accompany him to America by any means necessary. Borat discovers that smartphone-carrying Americans have become “calculator-obsessed” upon his return and that he’s easily recognized by the public in places like Los Angeles. So, he and Tutar have to don a variety of disguises in order to deliver said bribe, and maybe they’ll bond and grow together along the way? Oh, and Rudy Giuliani gets filmed in some compromising positions, but you probably already knew that. That’s it. That’s all I’m going to say.

Very little has changed in Cohen’s approach over the space of 14 years: The victims of his pranks remain mostly the same — the patriarchal wealthy, the right-leaning political class, and your average dipshit racist — and the venom he directs towards them is perhaps even stronger than it was originally. If anything, the American populace is all the more willing to believe and be misled than they were back in 2006, even if that misinformation isn’t coming strictly from the government anymore, and Cohen wisely includes a skewering of social media in his approach this time as well, given how Extremely Online our dumb culture is. We’re almost at the point where Borat doesn’t have to do very much anymore to get his interviewees to shed their skins and reveal the horrors lurking behind their polite expressions, and that prospect should terrify every one of us.

What’s novel is the film’s surprising feminist slant, which is, of course, elevated by the incredible work from Balakova, who is just as committed to the bit and wide-eyed and earnest in her execution of these jokes, and her presence allows Cohen to expand his range of targets. Anti-abortion “women’s” healthcare centers, debutante balls, Women’s Republican party meetings — each is a fertile ground for humor, and Cohen and Balakova tear them to shreds. And, unexpectedly (or expectedly, if you’re a true adherent to Cohen’s stylings), the movie is fucking hilarious. I genuinely hate watching comedies at home, and I really enjoy feeding off of the energy of crowds when I go to theaters, but this dumb movie had me nearly crying with laughter. A third-act twist and a surprising cameo make things even more ridiculous and broad, and I cannot wait for people to experience them on their own.

Moreover, it’s very clear that Cohen has seen the errors he made in the original Borat and wishes to atone for them, and much of the movie is designed to serve, somewhat, as an apologia for Borat’s antisemitism (which he’s currently being sued over, even if the scene in question makes the plaintiff look positively saintly in her patience and kindness to this bizarre caricature), his attitudes towards women, and pretty much the whole of his alienation of Kazakhstan. It’s proof that he can maintain that satirical edge and still evoke great laughs on a variety of other deeply offensive subjects without giving dipshit high schoolers a new venue to unwittingly bully their Jewish classmates. It would be very hard, this time around, to miss the point of Borat Subsequent Moviefilm, and even though some probably will, it’s much harder for them to go out and do dumb shit with it. In this horrible, horrible year, Borat‘s return is a lovely little surprise, and I’m sure it’ll brighten up the weekends of most people who run out to watch it on Prime Video. Very nice.