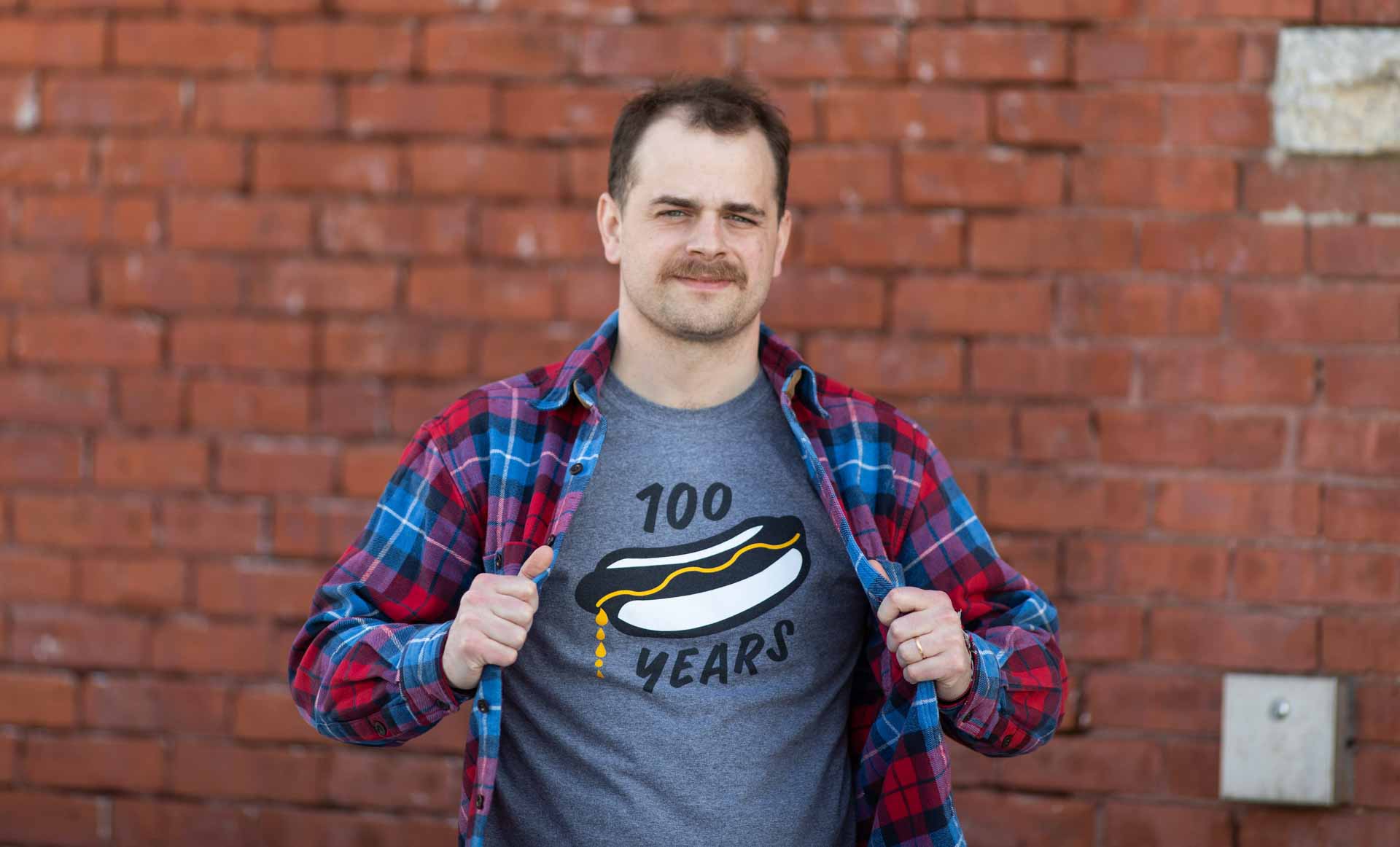 Shaun Connolly fondly remembers the night he recorded his debut stand-up album. Mostly for the fact that it was a huge milestone in his career, but also because a lot has changed in a year, and it blows his mind to listen back to it now and hear people being close together and enjoying themselves.

Recorded during last year’s WOOtenanny Comedy Festival in Worcester, Hot Dog! not only brings a career-spanning dose of Connolly’s observations and stories to the masses for the first time, but also the excitement of the game show of the same name that he ran at George’s Coney Island, a culinary institution in the city, for five years before the pandemic hit.

With a heavily physical approach to stand-up, Connolly was initially not sure how his brand of comedy would work, in terms of turning it into an album. In addition to that, Connolly also didn’t feel like he deserved an album, or had enough good material to warrant one. But with the help of his trusty brainchild and game show, the Worcester native found that he had all the right tools to finally make it happen, after 11 years on the comedy grind.

“‘Gimmicky’ kind of lessens what I do, but it’s kind of true. I have a lot of act-outs and it’s a very physical performance, so I just didn’t know if it would transcribe well on an album,” Connolly tells Vanyaland. “The actual recording was done with a game wheel, and I didn’t know the order of my album at all. The order of jokes I told was completely by chance.”

With the blueprint of the game show steering the ship, Connolly was left to the whim of the wheel choosing, at random, the categories that would further dictate which jokes he told. While the improvisation and mystery might have knocked others off kilter, Connolly proved the contrary, as he firmly believes that the unplanned nature of the set created the best possible outcome.

“[The wheel] kept me on my toes, and it kept that frenetic energy that I like to have when I’m performing,” says Connolly. “It took the nerves out of it, because I was less focused on perfecting the recording, and more focused on making sure that, depending on when the wheel landed on a certain thing, I knew all the jokes that were in that category.”

There were a number of aspects that left Connolly satisfied with the album’s final result, but above everything, the overall atmosphere, and the fact that it was done in Worcester quite literally brought it home for the stand-up vet. The fact that it was taking place in his home city certainly did add some pressure to delivering a killer set, but at the end of the day, there is nowhere else and no other way Connolly could see it happening — and he’s hoping the support he received from the scene will help others within it feel the same way for their own hopes of recording an album.

“The pressure was crazy, because a quarter of the crowd that night definitely knew almost all of those jokes, so to be able to get them to still laugh at them felt really good,” says Connolly. “It’s just cool too, that as Brian O’Donnell and I continue to help build up this scene, and all of these comics that are here are building it out even more, recording the album is really another milestone for how much bigger this scene is getting. I hope the other comics that are also making this scene great can feel that they have the opportunity and wherewithal to make an album here that will be supported by us and the city itself.”

Looking back on the night of the recording, Connolly remembers it for so much more than just a milestone in his own career, as it really is representative of why he loves his city so much. He reflects on the night as an indicative moment that truly expresses the powerhouse comedy scene growing in Worcester where, even with numerous shows going on at the same time during the festival’s schedule, none of the shows took away from the other.

“Worcester really showed up. Not only did people show up for my album recording that night, but there was also a show happening at the WooHaha, and one happening at Nick’s at the same time as the recording, and those were both sold out, as well,” says Connolly. “Worcester was here for comedy, and it is a comedy town, and it was just so cool that I didn’t have to worry about packing it in at my place or the other shows I was producing that night. It was just so cool.”

In many ways, the album has been nearly a dozen years in the making, as the set includes jokes dating back to Connolly’s first time on stage. Although he’s happy to take the trip down memory lane, he’s even more excited to finally put these old, battle-tested jokes to bed and look to the future.

“These are all a bunch of dumb jokes I’ve been doing for the last decade that I feel like I don’t have to tell anymore,” says Connolly. “I’ve been crafting some of those jokes for 10 years now, and I really hope people like them, and enjoy them as much as I did putting them out there for that one last time.”