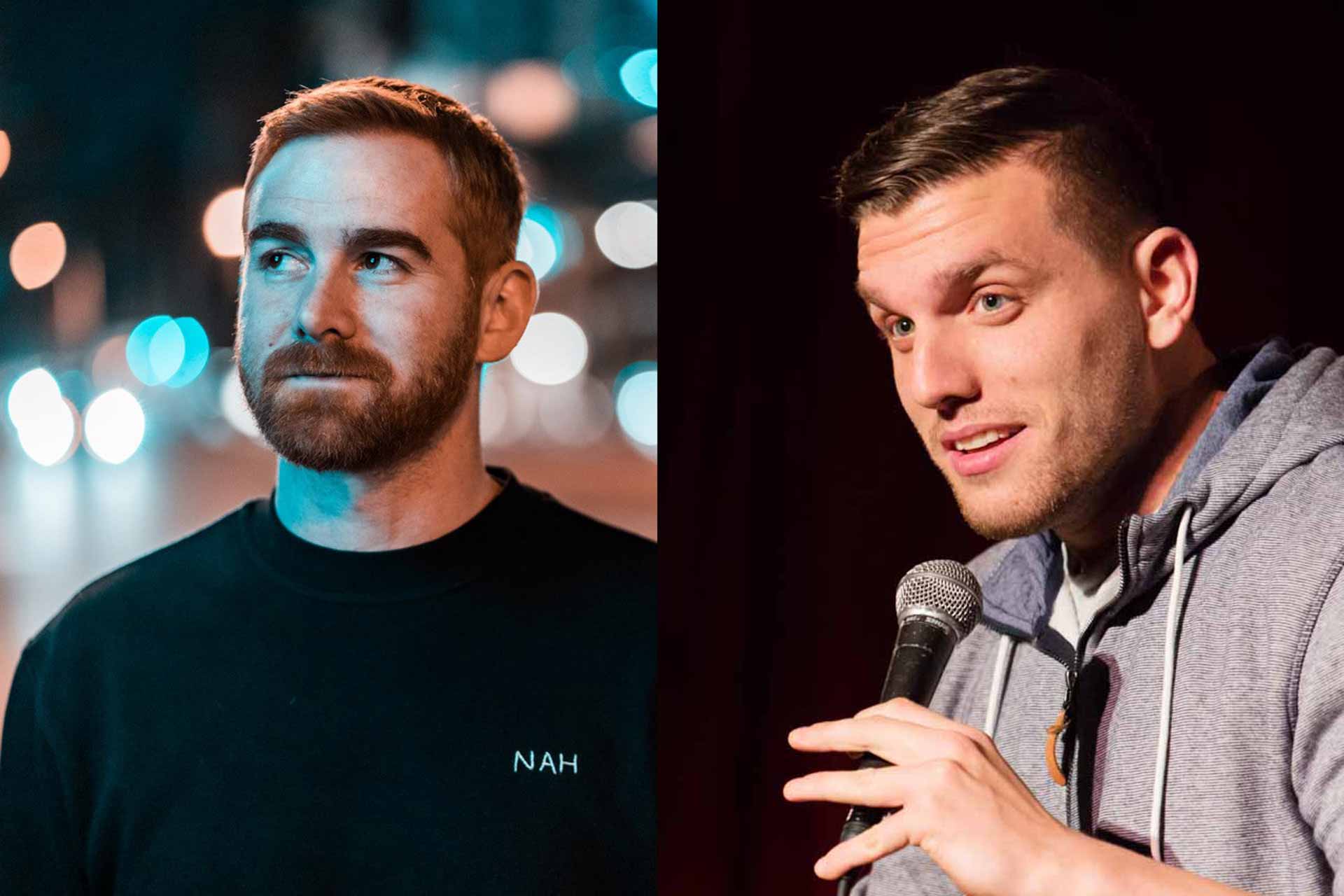 It may be getting chilly outside as the New England fall draws closer, but Andrew Santino and Chris Distefano are making their way to Cape Cod this weekend to help you steam things up.

Bringing their Steamy Windows tour to the Yarmouth Drive-In on Sunday (October 11), the duo is looking to deliver a night to remember on the Cape, so that we may forget our troubles for a little while. Now, while their main focus will be returning to the stand-up stage and letting loose with their respective strengths behind the mic, they’re also just really looking forward to hitting the road together and raising hell, as well as lifting our spirits along the way.

We got the duo on the horn to talk about their tour, where the idea spawned from, and pretty much everything — and we mean *everything* — in between. Check it out below.

Jason Greenough: Well, I’m glad we could get you two together to help hype the show in West Yarmouth on Sunday as part of your Steamy Windows tour. How are you guys feeling about the tour and the show as it gets closer?

Distefano: I feel good about it. By the time we get [to West Yarmouth], we’d have already done three drive-ins, but I’ve never done comedy at a drive-in so I’m excited to do it. It’s the new world.

Santino: [laughs] I’m excited for it, because me and my sweetheart get to take a little baby vacay together, which I’m really happy about, and we’ve been trying to do a little bit of stand-up here and there, so this will be a true test to see what this new world order of masks and distancing is like in a comedy space. I’m excited, but nervous that I’m going to be talking to your cars, and my advice would be that I don’t want to see any beaters. No beaters. The car has to be within seven years old. If it’s older than seven years, it’s gotta go. I don’t want any beater cars. Not in my eyeline, baby.

It has to be a perfect ten, right?

Santino: Right. And this is Cape Cod, these are all rich people, am I wrong or am I right? There should be at least one Ferrari.

So what goes into the decision process of who opens and closes every show?

Distefano: I think Andrew and I were going to flip flop on who’s top, and who’s bottom, right?

Santino: Yeah. Typically, in our real lives, we lay side by side, but in this case, we’re gonna be doing what we call the ‘rolling alligator,’ where we’re just going to roll on top of each other, and whoever ends up on top wins. That’s how we decide. We roll around in the dressing room until someone wins. It’s a pretty good plan.

A good ol’ American wager. Good for you guys.

Santino: Yeah, we like to wrestle naked in our dressing room to see who goes on first. By the way, all the big guys that tour? This is what they all do. Chappelle and his friends, and actually, we got the idea from Jeff Foxworthy and his guys. So, we’re going to follow suit with our comedy heroes.

Distefano: I think it’s a great show for the fans to come to, because a lot of comedians will go on tour together or whatever, but this is a very unique situation in which you have two well-known power bottoms going up there together.

So what should fans expect from this show, aside from naked wrestling in the dressing room?

Santino: Well, they don’t get to see any of that. But what should they expect, Chrissy?

Distefano: They should expect to hear what to do in the voting booth in November, and which way they should go — no. [laughs] It’s one of things where, hopefully [the pandemic] is gone next year, so it’s kind of like a collector’s item. You can come to a show, say you saw a show at a drive-in, and it’s a whole new experience. We’re going to do crowd work with the windshield wipers and things like that where it’s silly and fun, and we just hope nobody dies at the show.

I feel like a mosh pit at a comedy show would be ugly enough, but with cars? That’s going to be ten times worse.

Santino: We do say on the tickets that we have the right to commandeer a vehicle if we like it. So if there’s a car that we think is cool, it says it right in the fucking ticket link that we’re going to take your car. That was something that Chrissy and I were happy to put on our rider. If we like your car, we’re taking it, and that’s just how it goes. Welcome to the new world order.

I’m down to my last question for you guys. Obviously, there’s a lot to look forward to on this tour. But what are you guys looking forward to most?

Santino: I’m looking forward to getting out to west Pennsylvania, because I’ve never been. We’re going out there to churn butter for the first time, and they say you’re allowed to churn butter nude  in the fields if you pay a fee, so we’re going to go out and churn butter in Amish country. It’s something that Chris and I have spoken about for years, and finally we’re getting to live out our dream. The comedy is one thing, but being in the fields with a friend working with your hands, churning butter, building houses, and tending to sheep, that’s what the good lord above wanted us to do. The comedy is a bonus, but this tour is really more about us connecting back with mother earth.

Wait, so are you guys going to be churning butter Swayze-Moore style?

Santino: But we really are excited for this tour, and we want everyone to know that we’re still comedians and we’re still having fun. We just want to come out and make people laugh. The only thing we have is comedy, because if they take it away, we’re done. Chris and I have no other discernible skills, and so we’d like to continue this career. If that’d be okay, it’d be nice to support comedy while the world is on fire. We’ll need the support financially, because Chris and I are thinking about getting a house on Cape Cod together for a little vacation getaway nook. That’s actually where all of our money is going. The Cape Cod house.

So, at this point, I’m not sure what I can print here. [laughs]

Distefano: It’s what our president would want you to do, so that’s what you should do.

Distefano: So, what we’re saying we’d like to see from the Cape Cod audience is a parking lot full of American flags, if you know what I mean.

This has been a really fun chat, guys. Thanks!

Santino: All in good fun, we really appreciate you. We just like to have a good time. This is what the fans should expect. To be very genuine right now, with all jokes aside, we’re just ready for people to be silly again. We just want to have fun and joke around, and me and Chris share the same personality, and that’s why we’re going on tour together. In the sense that you can’t take anything too serious, because we’re all going to fucking die, and you might as well have a good fucking time. We like to be silly and have fun, so come on out and expect to see us fucking off and letting you laugh off some of the pain and shit that’s going through the world right now. Just come on out to the show, and let it ride, because we can’t sit around bummed all the time. We gotta go have some fun.