‘The Devil All The Time’ Review: Satan is real, and he looks like Robert Pattinson 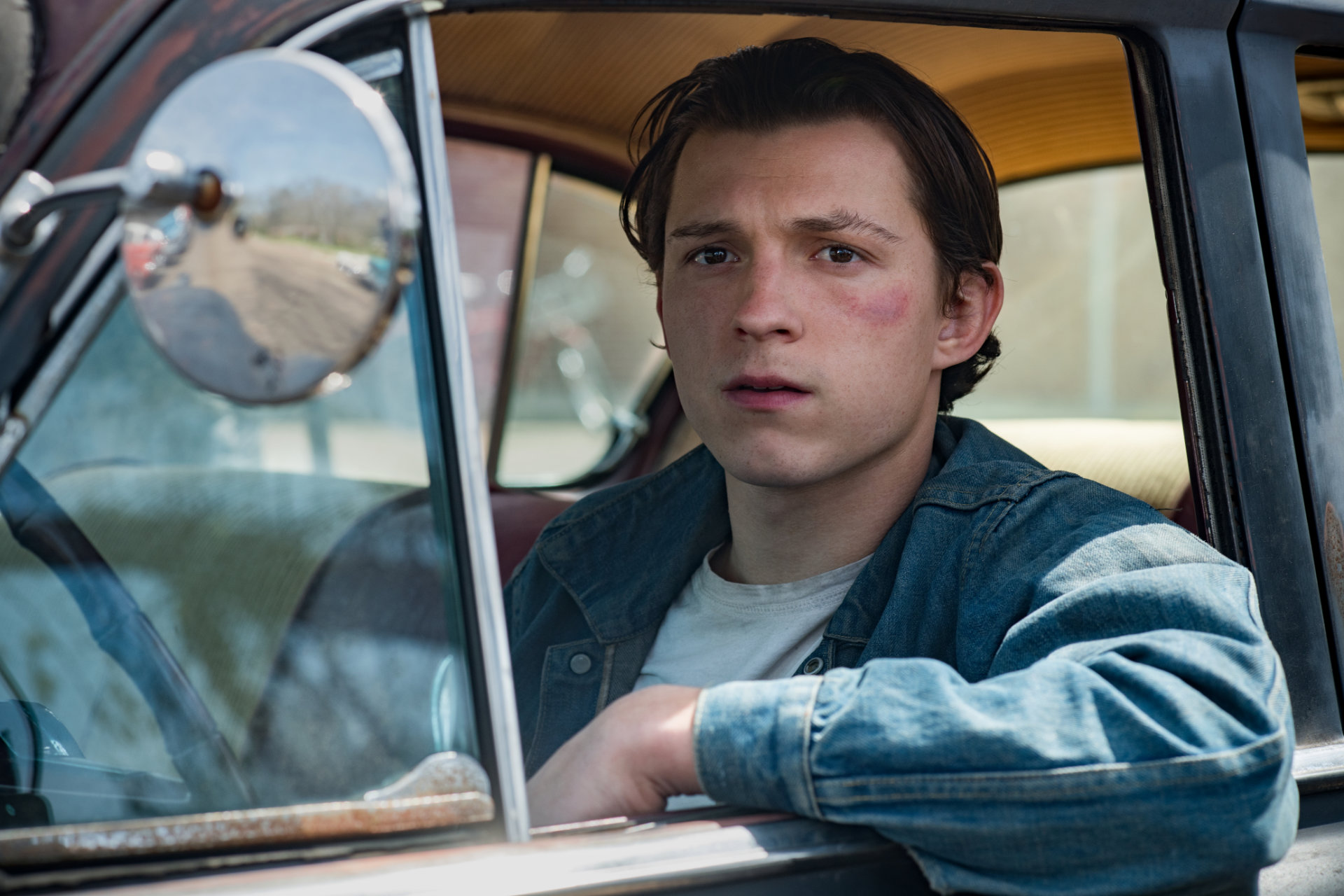 It’s a hard thing to make religious films in an environment like this, where the marketplace has been cornered on “Christian Cinema” by the squatters at whatever garden-variety horseshit right-wing production company has decided to cannibalize the faith of millions for easy profits, dark lobbying money, and the continuance of Kirk Cameron’s career. That’s not to say real faith-based films don’t make it through the cracks — all 10 people who saw Terrence Malick’s A Hidden Life know that and were summarily rewarded for it by getting to watch Great Cinema — but they don’t often take the form of the strained apologias we’ve come to expect from companies like PureFlix. Take, for example, Antonio Campos’ The Devil All the Time, which, on its surface, is of the same school of darkened nihilism that defines the work of both Cormac McCarthy (on the high end) and Nic Pizzolato (on the leather-jacketed low-end), where bloody things happen to good people and bad people get lots of money and freedom. It seems to take place in an immoral, bitter universe, where faithful Christians are seemingly mocked by God (as if they aren’t every day in real life), and unimaginable horrors are inflicted upon its characters by either a non-existent God or a very distant one. But I was oddly moved by the film, and I think it’s one of the more interesting stories about American faith that has emerged in the last couple of years.

Based on Donald Ray Pollack’s novel of the same name, The Devil All The Time tells the story of two faithful families in rural West Virginia and Ohio whose lives intersect over a period of 20 years, beginning in the aftermath of the Second World War and ending as our involvement in Vietnam was scaling up. Perhaps it’s stronger to list the various stories and subplots as parables, given how red-letter New Testament the film feels at times. There’s ex-GI Willard (Bill Skarsgard), father of our main character, Arvin (Tom Holland), who saw things no man should see in the Pacific Theater and is ultimately somewhat healed by a chance encounter with a kind waitress (Haley Bennett) upon returning home, who soon becomes his wife and the mother of his son. In that same diner, another waitress (Riley Keough) falls in love with a charming photographer (Jason Clarke) who has an unusual fetish. You see, he likes photographing corpses, and he loves it when his girl seduces them first before he puts a bullet between his eyes. There’s the churchgoing girl (Mia Wasikowska) that Willard was meant to be put up with after he returned from the war who falls in love with a spider-charming preacher (Harry Melling) who believes he’s been endowed with special powers by the Lord himself.

Flash-forward years later and after a heaping load of tragedy, Arvin’s grown to high-school age, working on a road crew in the summers in between school years. There’s little he likes in his life other than his younger step-sister, Lenora (Eliza Scanlen), a pious and kind-hearted person who is Arvin’s only real friend in the world, and he spends a lot of time with her as she visits graves and goes to church, protecting her from the bullies who target her daily. Their lives are disrupted by the appearance of a brand new preacher named Teargardin (Robert Pattinson), a venomous, silver-tonuged bastard with a high-pitched whine and a superiority complex, an excellent role which Pattinson plays up in a Brando-like fashion (who gives a good goddamn if the accent is right when the man gets to the truth of the thing, right?), and this sets in motion a series of violent events, in which Arvin tries to set right what’s wrong by whatever means necessary. And what follows is brutal and uncompromising in a way that will rock certain viewers and cause them to understandably find something else to watch, though there’s plenty of bitter, pained humor here as well.

Campos’ film is given an interesting tension with regards to its religious perspective thanks to what’s to be one of the most controversial elements in the film: Its narration. On the one hand, the seeming nihilism can feel oppressive sometimes — if there is a God, surely he would keep faithful men safe and not subject them to the utter and bestial violence that they can inflict upon one another and trauma that they can cause — and it is often quite hard to watch even for a seasoned viewer of blood-and-guts horror (if you like dogs, well, you probably will want to avoid this one as much as cat fanciers stayed away from Don’t Fuck With Cats back in January). In fact, it almost goes out of the way to spite the few truly innocent and kind people in the film, blighting them with cancer or making them victims of horrible, cruel circumstances. But the third-person omniscient narration, provided by Pollack himself, suggests otherwise, that there is something watching over these people and seeing their stories unfold, and ultimately writing the wrongs that come to them, even if it may not be as fast as they’d like or hope. It often recalls the resolution of Berlotucci’s The Sheltering Sky, perhaps not in specific practice (Pollack doesn’t cameo in the same way as Paul Bowles did in that film, and his narration is more specific to the tale rather than providing it a gorgeous coda), but it’s astonishing in own right, capturing the language and tone of the book while using its detail to enhance our perception of the characters’ deepest thoughts.

And deep thoughts they do have, as limited as they are by their stilted polite manner and whatever deep hurt is underneath it, as each looks to fill the “God-shaped hole,” as Jeff Tweedy put it many years ago, with whatever they can find to assure them that there is some structure in the universe. For Arvin’s dad, it’s his wife, who provided light to help him out of the black depths of his trauma; for Pattinson’s evil preacher, it’s his own infallibility as a member of the most protected class in the backwoods of West Virginia, and he wields that power to horrific ends; and Clarke’s serial killing photographer plays with life and death and calls it art, while his girl Keough initially finds the thrill captivating and their love passionate, though by the time they return later on in the story, their relationship is close to collapsing. Like Job, Arvin’s touched and hurt by all of their misdeeds, and ultimately, he discovers that he’s the only person he can rely on, given the ample amount of powerful men standing in the way of him and justice, and he has to help himself up, and in turn, God will help him (hell, he’s even given the metaphorical Excalibur of this film — a righteous weapon that rid the world of its then most recent ultimate evil, if you believe the apocryphal story attached to it by Arvin’s dad). There’s a heartbreaking quality to Holland’s performance — an innocence bitterly clung to and, once shattered by cruelty, avenged a thousand times over by fury — and his wide-eyed sadness, which seeps through every bit of the frame is often as overwhelming as the content on screen.

Perhaps The Devil All The Time would have worked better as a miniseries, where Campos and company could have truly delved deep into the psyches of his characters without having to resort to using narration, and perhaps it might have flowed smoother. This would have been a popular concession to Netflix’s standards on the platform — the streamer loves nothing more than a brand-new original series, after all, which viewers can put on in the background while they do laundry — and would have likely been less of a bitter pill to swallow in the end, separated by natural breaks in the narrative where one could switch to Parks and Rec after watching a bloody crucified GI scream upon awakening on the battlefields of the Pacific.

But to present it as a two-and-a-half-hour cri de coeur about the ruthless unfairness of God’s own original sin — that a being so powerful and omniscient would condemn men to a life of suffering in bodies of flesh and blood — and that true justice is only assured with the acceptance of death and the knowledge that no one is coming to save you so you might as well do this yourself, the filmmaker overwhelms you with the terrible beauty of a truly moral universe sitting hand-in-hand with free will.