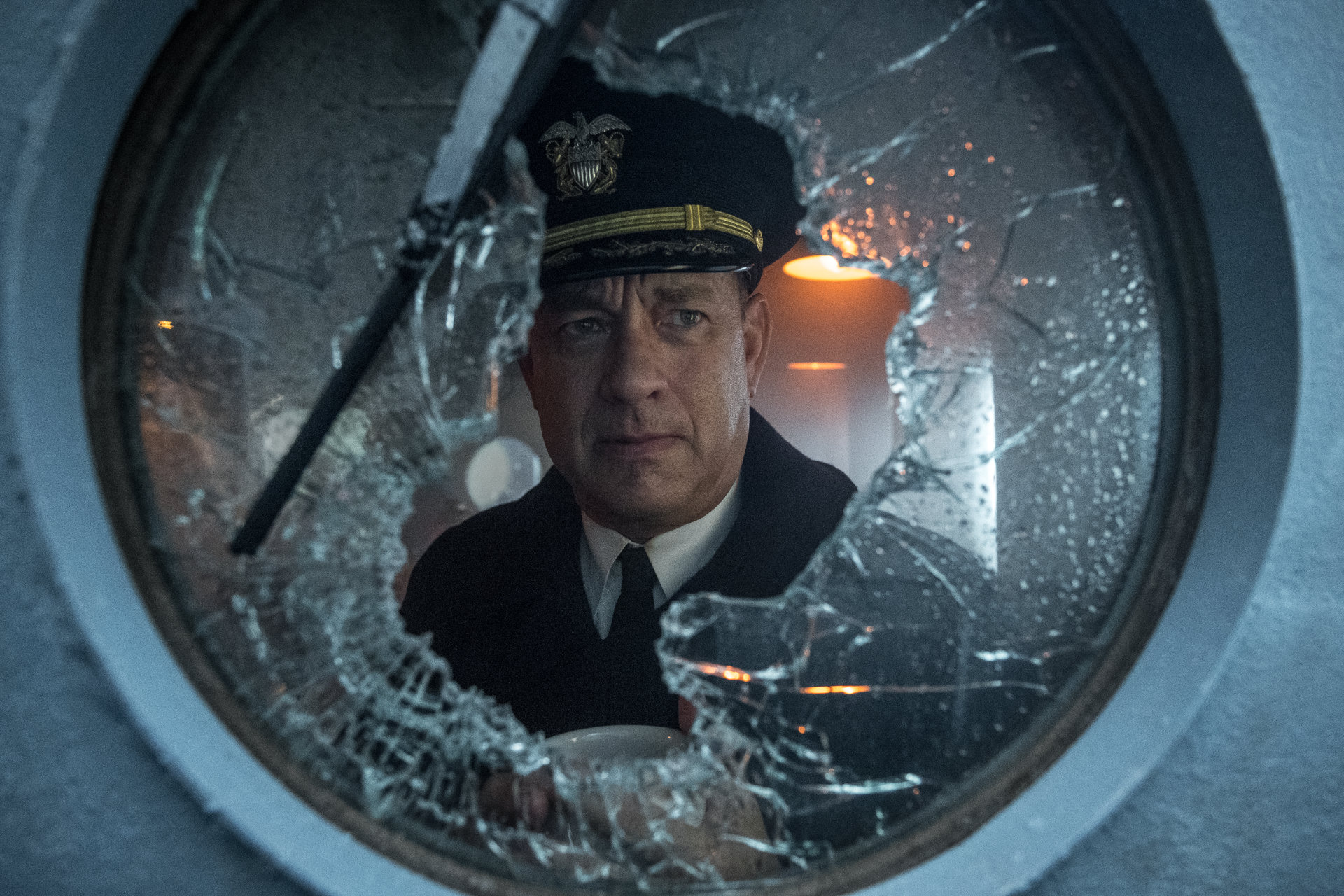 A few weeks ago, in the midst of its COVID boredom, Film Twitter began debating who the greatest one-hit wonder director was in cinema history. I’m still partial to Charles Laughton, but a fascinating consensus emerged around Tom Hanks, whose first project as a director and, more importantly to our purposes here, as a writer, That Thing You Do! is downright beloved by many. Hanks didn’t drop the mic in the same way that Laughton did — he did make Larry Crowne after all — but it’s always interesting to see his output as a full creative. Indeed, the last decade has seen Hanks dabble more in writing — in addition to Larry Crowne‘s screenplay, he penned a book of short stories based around his typewriter collection — and now, he’s back as a screenwriter, having penned the screenplay for Aaron Schneider’s Greyhound, in which he also stars. It’s a smartly-written and directed WWII naval thriller, and is now the crown jewel of Apple TV+, who purchased the rights to the film from Sony back in May (it is a tremendous bummer, after all, that we won’t be able to see this on a big screen, where it deserved to be seen). No longer is Hanks a one-hit-wonder, at least as a screenwriter.

Adapted from C.S. Forester’s novel The Good Shepard (De Niro got there first in 2006, so the original title was a no-go) Greyhound tells the story of the U.S.S. Keating, a Fletcher-class destroyer, tasked with protecting a convoy of merchant ships and supply vessels on their way to the U.K. in the early days of what would be known as The Battle of the Atlantic. For much of the journey, the convoy will be out of range of air support, and the waters are full of U-boats, who broadcast taunts to the crews over their radio frequencies. In command of the Keating is Captain Ernest Krause (Hanks), a Navy lifer who, ironically, has no wartime battle experience under his belt. Now, he’ll have to (metaphorically) steer the ship through troubled waters and bring the fight to the Germans encircling the convoy, while trying to save as many lives as he possibly can in the process. And, that’s really it. The beauty of Greyhound lies in its simplicity and efficiency, and it lasts barely over 90 minutes before the credits roll.

It’s always interesting to see how an actor writes a part for themselves, and Hanks’ work here is no exception. His workmanlike screenplay eschews most of the internal drama that seems to be at the forefront of Forester’s novel — even the most cursory synopsis of the original text seems to hint at an interiority absent from Krause’s characterization here — but Hanks has enough confidence in his own acting ability that he doesn’t feel the need to overwrite it. That’s slightly undermined by a very oddly staged-and-scripted moment near the start of the film involving his character’s long-term love interest, played by Elisabeth Shue, and the film may have been stronger without it, but Hanks recovers.

Instead, he adds little grace notes that enhance his performance — a sigh of relief as he puts on a beloved old jacket on the frozen bridge, a quick and sour remark about lives lost after one of the sailors under his command celebrates the deaths of those on board a sunken U-Boat — that offer the suggestion of a greater depth without needing to dwell on it. All other actors are lost amongst the fracas, with the minor exception of Stephen Graham, who, aside from Shue, is about the only recognizable face to pop up here, but that is also central to the film’s ethos in its own right: The crew is defined by their positions, not by their personhood, and any element of the latter — a stray sneeze, a misheard communique — undermines the security of those they’re trying to protect.

As such, Greyhound, as a whole, is more curious about the process of naval warfare than a number of its modern counterparts, and it owes a great deal of debt to Christopher Nolan’s Dunkirk. Even if those two films’ priorities are different — Nolan’s theses about editing and the passage of time as its experienced are far beyond Schneider’s ambitions here — it’s hard to imagine a more stripped-down, personality-less take on warfare like this existing without the success of that prior film. There are no characters to hang on to or to fear for, there is only a job, and in a bizarre way, this makes it incredibly compelling. A natural tension is derived from watching this massive ship attempt evasive maneuvers or trade fire with a surfaced submarine, and Schneider’s skill is illustrating just how massive (and yet how small, in comparison to merchant ships and the ocean itself) this vessel really is. He’s not above a Malickian flourish — his camera drifts above the clouds during a night-time battle to reveal the Aurora Borealis — but he excels at the bridge drama, with its pace and staging highlighting the speed and skill required for the crew to survive the journey.

Somewhere after the first battle, I started envisioning the Keeling as a single organism, with Hanks’s captain as its brain, its rudders, its legs, its cannons, its fists. And it’s that dispassionate point of view that makes Greyhound a really interesting watch, even if it’s stripped of the traditional creature comforts of the genre.