Interview: NERVO, Krewella, and Raja Kumari on unleashing a ‘Goddess’ 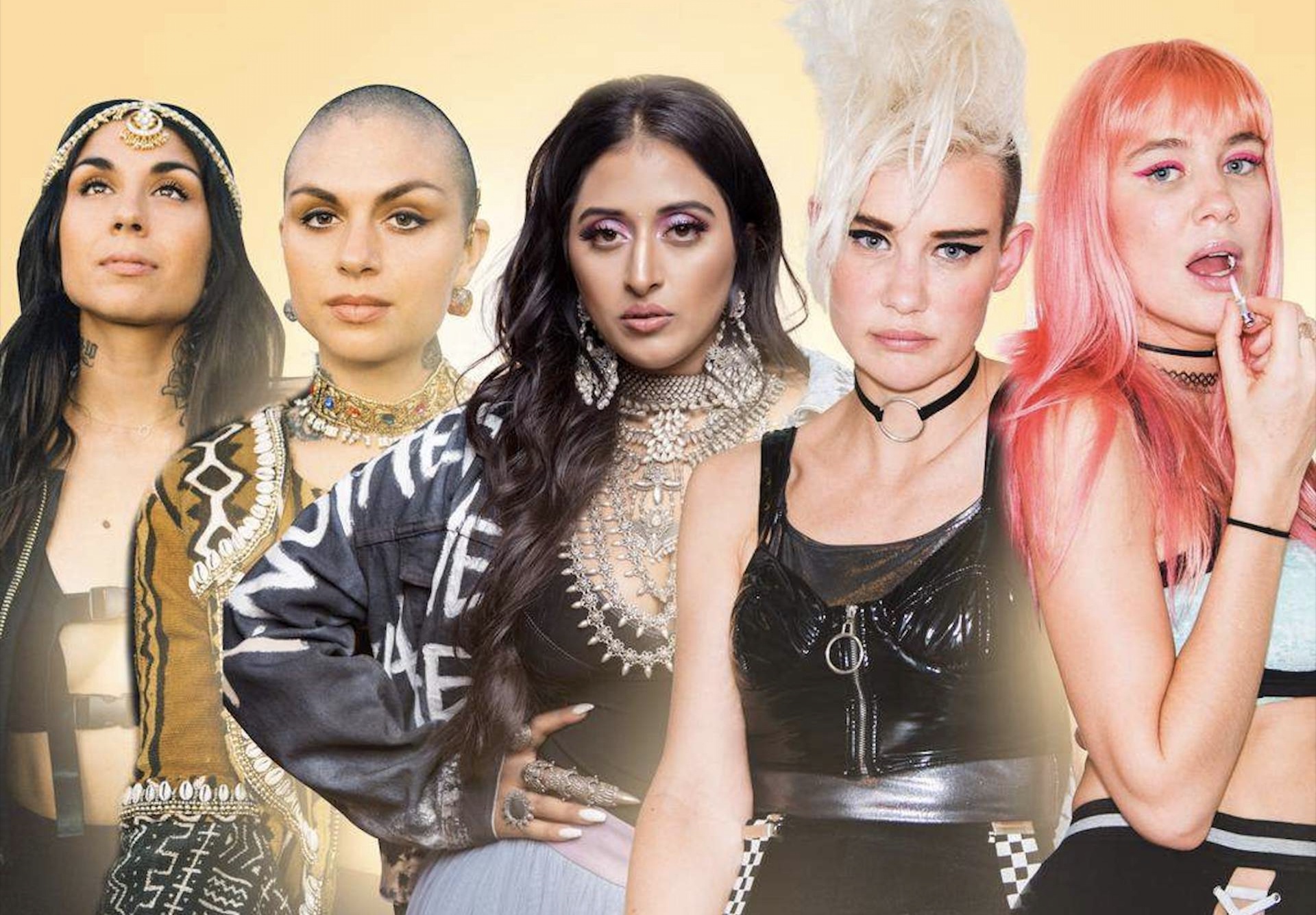 Put three of the most reckoned-with artists in modern dance music on one track, and it’d be a travesty not to give it a name that exudes sheer power –something along the lines of “warrior,” “heroine,” or “conqueror.”

Aptly, when Raja Kumari and EDM duos NERVO and Krewella tag-teamed for their new song together, they did one better; the collective of five women titled it “Goddess.” Built on a foundation of jangly dance-hop, the tune marries two of the world’s biggest DJ duos with Kumari’s longstanding MC and songwriting creds, cumulating in a self-affirming, intercontinental bash.

Vanyaland recently caught up with all five artists on their May collab, talking about inclusion in the EDM world — and the music industry at large — and what it’s like to release new tunes in quarantine (spoiler: it’s not exactly a simple decision, but then again, nothing about 2020 is “simple”).

Victoria Wasylak: First of all, how are you all coping in quarantine? I’ve been playing an obscene amount of Animal Crossing.

Raja Kumari: Things are going well! It’s been nice to have this alone time to explore my inner emotions. When on tour you don’t have that much time to reflect on yourself, and this has provided a necessary pause to re-center.

NERVO: We are doing well, thanks! We are a bit restless and of course can’t help but feel very sad for the world, but all in all we are taking this pause to spend time with our families and make music. We’re good at keeping ourselves busy actually! Mim and her partner and his family have all fully recovered from COVID-19 so they are back to (the new) normal in Barcelona. Thankfully everyone pulled through without any longstanding issues.

What made now the right time to assemble this dream team for “Goddess?” When did you first get the idea for this collaboration, and how long has the song been in the works?

Krewella: We’ve been looking up to NERVO since we were babies in this industry, and always appreciated their songwriting, sister-connection, ambition, and support of our project. Talks about collaborating were loosely thrown around on social media, or as we saw each other in passing at festivals. But when Yasmine and I started working on “Goddess,” we thought it would be the perfect opportunity to bring other bad bitches on the track. We wanted it to feel like a party. Our fellow sisters Mim & Liv brought in their perspective with the songwriting, and we made edits over Skype.

They did a killer job of recording and producing their own vocals. It’s such a jam to dance to, and we just want listeners to feel their inner goddess and move their bodies freely while listening. Empowering oneself through body movement can be such a liberating way to tap into that spirit. Raja was the icing on the cake. When she signed on to write her bridge and join the party, we felt even more connecting to the record. Her presence, being a badass Indian rapper, writer, and singer, integrated the cultural fusion that Yasmine and I live for.

Kumari: We’ve been working on this song for quite some time — the girls from Krewella sent it in late 2018 I believe. I’ve been a fan of their work for some time and when they said they wanted to work on an all female empowerment anthem, there was no way I could say no.

NERVO: This collab was spearheaded by the wonderful Krewella sisters. They sent us an initial idea of the track about 18 months ago and we have been working on it ever since. They brought Raja on as a rapper. We were honoured to work with these ladies. The entire process was a walk in the park! No drama. A few edits — even a few creative “disagreements” but no hard feelings. If only every collab was like this!

Did you ever link up in person to work on this, or was it all done ~virtually~?

NERVO: The actual creative/recording was all done virtually so we were not in an actual studio together. We did meet with Jahan [of Krewella] in L.A. for dinner if that counts?

Kumari: This was all done via e-mail, but I can’t wait to perform this song live with the girls!

What was it like coordinating production and beatmaking responsibilities? Was it tricky juggling that between you?

NERVO: On this one the Krewella sisters took the lead with beatmaking as the beat and chords were near complete when we received the idea. We contributed to the topline & melody.

A lot of musicians have been wrestling with the idea of releasing music during a pandemic, either because people are consuming music differently while constantly at home, or because it just didn’t feel “right.” Was that a difficult choice?

Krewella: I find that question to be so difficult to answer. There’s so much confusion, lack of valid data, and uncertainty, to even speculate how this pandemic will reconfigure the psyche of the community. And I don’t know if what I am personally experiencing is a reflection of the collective. I’m a bit all over the place emotionally, and my music choices are such a reflection of that. Maybe the general population is getting bored, overwhelmed, or numb to the constant churning out of music content that feels like a desperate attempt for relevance, and they’re seeking authentic, personal stories, created from a spiritual place outside the pressures of the industry. Or maybe the general population is just gobbling up all the content and spending more time browsing online to bide the time, or because entertainment is healing them.

I think it might all be happening at once. At this point for music artists, the inability to plan and schedule our future almost seems to be becoming the “new norm,” and the vibe I’m getting is that some creatives are leaning into this. Like what can be created during this time when we remove the veil of “time.” Some might not even be creating yet. Just taking it slow. Taking it day by day, feeling the feels. Processing what thoughts, themes, emotions, and imagery, surface from the subconscious, as we are not busying ourselves with the hustle bustle of maintaining our positions. As I’m trying to be patient with my own creative process, I’d like to think this period of re-calibration and self-discovery as fertile soil for seeds of art to flourish.

NERVO: We are constantly working on new music, so [we] felt we should release the older material to make way for the new music. The thing is, if we pause our releases the “older” tracks may never see the light of day as we very often move on to the next idea we finish. Does that make sense? We say keep the music rolling!

Raja, you had commented how this song isn’t just for women, it’s for everyone who’s embracing their inner goddess. Can you tell me a little more about that?

Kumari: Everyone — male, female, non-binary — has this inner warrior within themselves. The rise of social media has given rise to keyboard warriors and bullies, who often can make us question our self-worth. It’s so important, especially now, to have confidence with ourselves and address a confrontation knowing we have your back.

When I think of dance and EDM music I don’t exactly picture a very, shall we say, amicable environment for women and non-white musicians. For instance, most people think of a white bro when they hear the word “DJ,” which is a huge part of the problem. What has it been like to machete this path and change that stereotype in dance in the 2010s (and now 2020s) as the genre keeps gaining popularity?

NERVO: One thing we have noticed is that there are so many subgenres within dance music that gain popularity, and with this there is a broader audience, or it can appeal to more, let’s say “niche” demographics. This is great and should definitely be celebrated. It would be boring if all dance music had the same as you say, “non-white”/“bro” face to it. Bring on creativity. Bring on diversity. Bring on the future!

Krewella: As our project continues to evolve, our future vision is becoming more clear [and] that involves more efforts to bring together voices who are still minorities in the dance community.

Lastly, I feel like “dream teams” in any genre — pop, rap, dance — are pretty rare because women are so frequently pitted against each other, as if there can only be one “queen” of any style of music. In addition to collabs like “Goddess,” what do you think we can do to help end that mentality?

NERVO: Perhaps leading by example is the only way we can truly inspire others, right We have always worked with fierce gals like Kreayshawn for example. Or Ultra Nate. Or Kylie Minogue. It’s a no-brainer that women should always support each other. There’s a big enough (music industry) world for us to all co-exist. Working with great women has definitely been one of the biggest blessings in our career so I don’t understand anyone who doesn’t support their fellow ladies.