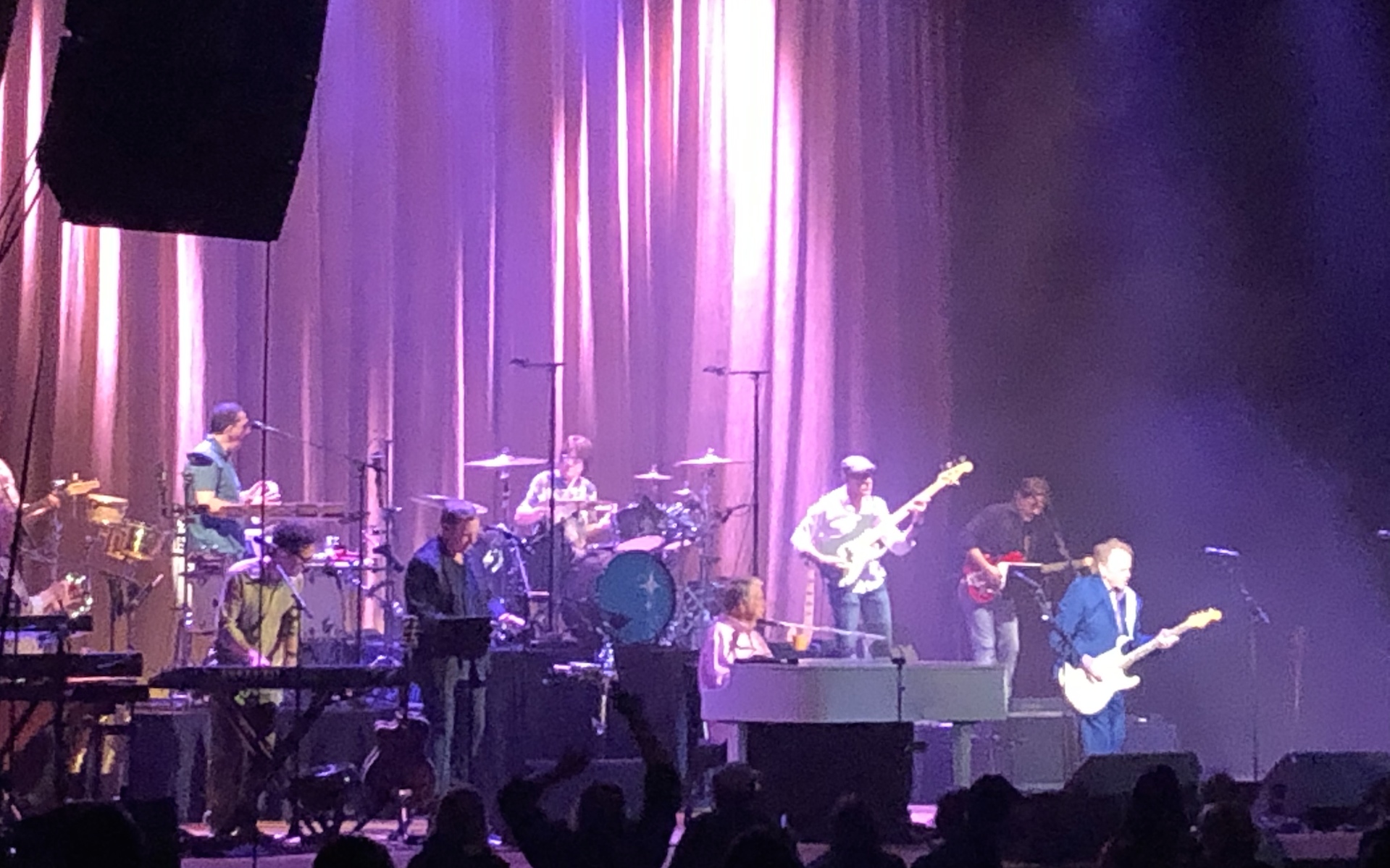 It’s hard not to approach a Brian Wilson concert with some trepidation. The 77-year-old Beach Boys auteur was supposed to play the Lynn Auditorium back in June, but after back surgery reignited his notorious mental health struggles, the show was rescheduled for Friday night (January 24). Even now that he’s feeling better, the fact remains that Wilson earned his legend in the studio, not on the stage. But I would guess that none of my fellow concertgoers came expecting a Springsteen-tier, age-defying performance; they probably just wanted to hear some of the greatest pop songs of all time, sung by the great artist who helped create them. And, with a lot of help from his friends, Wilson gave them just that.

But first, a surprise opener! Andrea Magee, a Belfast native currently based out of Austin, led her adroit band in a brooding yet energetic set. Her sound is rooted in American folk-rock but has a distinctly Celtic air, as she pounded out roiling rhythms on the bodhrán (an Irish hand drum) and even played some keening tin whistle. A closing rendition of “Down in the River to Pray” showed off everything that makes Magee such a unique talent, starting as a hushed showcase for her gorgeously lilting voice before the band kicked in and turned the old spiritual into a country-rock foot-stomper.

Once the 10 musicians in his top-notch band were assembled, Wilson, with the help of a walker, made his way to the center-stage piano bench, where he remained for the duration of the 90-minute performance. The show had been billed as “Greatest Hits Live!,” and it more than lived up to that billing, as Wilson and company crammed 26 songs into those 90 minutes. The opening fusillade from The Beach Boys’ early-‘60s surf-rock days hit with an almost punk-rock speed and brevity, each two-minute classic separated from the last by a moment’s pause at most.

Frequently taking lead vocals was Wilson’s fellow Beach Boys co-founder Al Jardine, whose boyishly pure singing voice has aged far less audibly than Wilson’s. Wilson can still hit the notes and everything, but his vocals had a fragile quality which, while tremendously affecting on the always-heartbreaking “God Only Knows,” wasn’t as well-suited to the fun-times oldies. Also taking turns at the mic were Jardine’s son Matt, whose superhuman falsetto proved invaluable on a lovely “Don’t Worry Baby,” and keyboardist Darian Sahanaja, who spearheaded Wilson’s successful 2004 solo version of the ill-fated Smile album.

Halfway through the set, one last singer emerged: Blondie Chaplin, who was a Beach Boy for a brief spell in the early ‘70s. For the three-song stretch with Chaplin in the driver’s seat, the band briefly transformed into a ‘70s arena-rock act, complete with protracted instrumental codas and plenty of guitar solos from Chaplin himself. The triptych had its moments, particularly the beatific head trip “Feel Flows,” but it also felt awkwardly disconnected from the rest of the show. It didn’t help that immediately beforehand, Wilson and the band had turned in perhaps their finest performance of the night on “Heroes and Villains”; no guitar solo could compare to the thrill of experiencing one of Wilson’s most brilliant pocket symphonies in the flesh.

The mere presence of “Heroes and Villains” on the set list felt like a concession to the Brian-Wilson-is-a-genius types in the audience, although judging by the small handful of people who gave it a standing ovation versus the much larger number who got up to dance to “Help Me, Rhonda,” the majority of the crowd was not there for deep cuts. Which is fine; I love Pet Sounds as much as the next music writer, but as Wilson and his cohorts ping-ponged from Chuck Berry rips to senior-prom waltzes to lushly arranged psychedelia to ersatz Motown pastiches, they made a convincing argument that The Beach Boys’ greatness lay not just in the bedroom masterpieces floating around Wilson’s head, but in the sheer breadth of popular styles they enriched with their otherworldly harmonies.

The night ended with “Love and Mercy,” the only selection from Wilson’s solo career and, with a copyright date of 1988, the evening’s newest song as well. It’s a beautiful song, and one whose core sentiment clearly means a lot to Wilson — he’s taken to using its title as a sign-off for public statements, a la Ringo Starr’s “Peace and Love.” It was a graceful finale for a supremely entertaining evening: Just Wilson on piano, some harmonies, and that voice, delicate and weathered, but still doing its part to add a little music to the world.