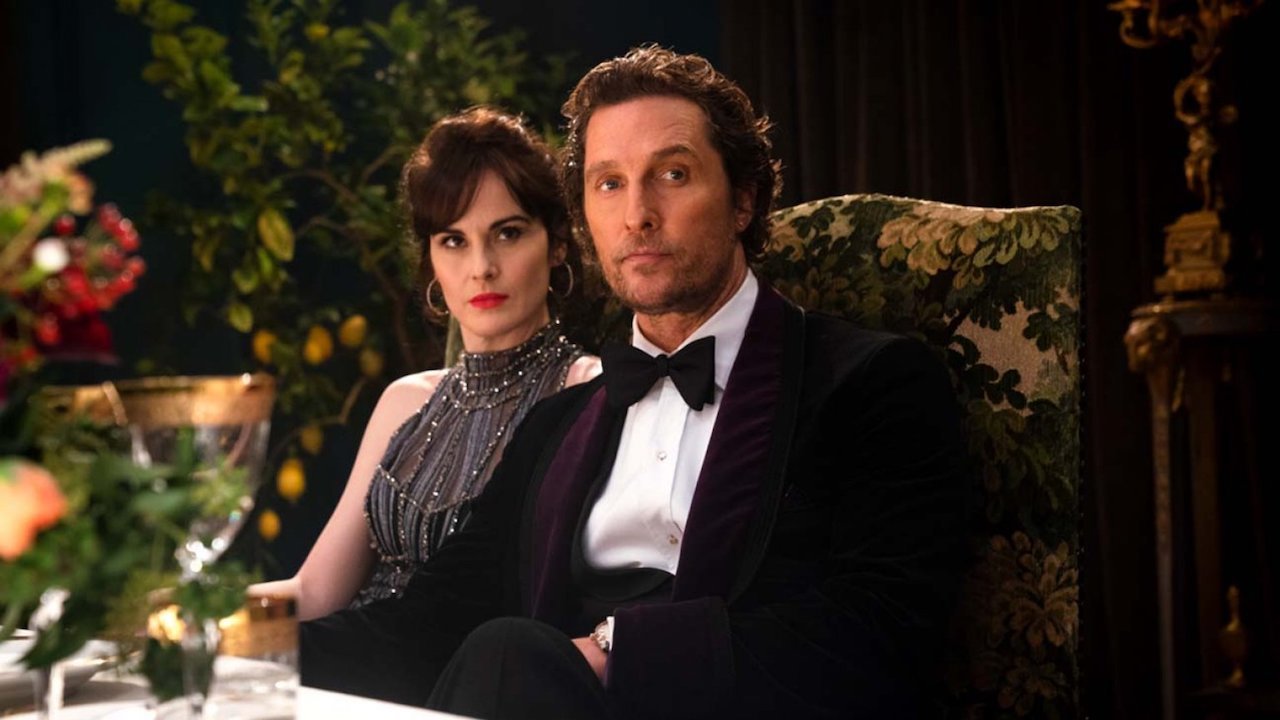 The global cannabis industry is projected to reach anywhere from $66.3 billion to $97.35 billion by the middle of the decade, depending on which market research firm you cite, with predicted compound annual growth rates between 32 to 37 percent. A report from Mordor Intelligence last year showed the U.S. market alone — including industrial hemp and recreational and medical cannabis — was valued at $14.5 billion in 2018.

This is to say, if you didn’t already know, legal weed is shaping up to be very big business. It’s also those numbers that provides the backdrop for The Gentlemen, the latest feature from director Guy Ritchie (Snatch, The Man from U.N.C.L.E) about a drug lord looking to put his empire on the market.

Set in the U.K., The Gentlemen stars Matthew McConaughey as Mickey Pearson — an American expat, Rhodes Scholar and marijuana baron sitting on 12 grow-sites strategically built on the estates of minor royals and a robust European distribution network. Looking to retire and sensing that British cannabis legalization is imminent, Mickey angles to sell his business to billionaire Matthew Berger (Jeremy Strong) for $400 million. However, as soon as a verbal agreement is reached, the headaches begin.

First, Mickey is approached by a rival Chinese drug gang led by Lord George (Tom Wu) and the ambitious, chaotic Dry Eye (Crazy Rich Asian’s Henry Golding) who threatens to make life very hard for Mickey if he doesn’t accept their counter offer. Next, a group of amateur boxers break into one of Mickey’s farms and film a fight video, which they upload to YouTube, forcing Mickey to shut down the location. Finally, the heroin-addicted daughter of one of Mickey’s pocket royals goes missing, prompting him to send his right-hand man Raymond (Charlie Hunnam) off to locate her and bring her home.

All of this is told to the audience through the framing device of tabloid photographer Fletcher (Hugh Grant), who meets with Raymond at his home in an effort to blackmail Mickey to the tune of 20 million pounds.

Ritchie does well juggling the half-dozen plot threads running throughout The Gentlemen, giving each of his ensemble members a chance to chew the scenery. As much as The Gentlemen is a comedy about criminals attempting to ratfuck one another as they climb the class ladder, Ritchie also drops in a few comments about gentrification. As cannabis becomes legalized, the film suggests, the black market of the lower classes is being paved over by rich white businessmen who speak in terms of mergers and acquisitions and are motivated by revenue streams, rather than any sort of equitability or social justice.

But Ritchie’s concerns about gentrification also ring hollow when throughout the entire film he appears to delight in filling his screenplay with as many racial slurs as can fill a page. Characters are consistently defined by their race, including an embarrassing monologue delivered by Fletcher introducing Dry Eye as “Chinese, Pekanese… yellow is the color” and seemingly endless jokes about a character named Phuc (Jason Wong) whose name sounds like a certain English epithet (by which I mean “fuck”).

Meanwhile Berger, our billionaire would-be buyer, is a nebbish Jew whose followed everywhere by his “Mossad Crabs” and speaks in obnoxious, long-winded innuendo. And then there’s a wholly tertiary Black boxer whose entire role in the film is to get called a “Black cunt” (in the British sense of the word) by his sparring partner, only to set up his coach (Colin Farrell) for a lesson on equal opportunity offense (“You’re Black and you’re a cunt!”).

Is this wit? Is this crafty wordplay? I’ve always been a proponent of “depiction doesn’t equal endorsement” but Guy Ritchie really seems to relish in his characters “comic” bigotry here. It’s almost fascinating to watch the man’s complete lack of growth since he first became a dorm room favorite in the early aughts, with his knock-off Tarantino dialogue through films like Snatch, though more so this exercise in offense was exhaustingly obnoxious. And whereas Tarantino last year released perhaps his most mature film to date — one not without its own issues with sex and race, but an undeniably more introspective and reflective film than anything he’s done to date (probing what it means to live a life spent in fantasy worlds and the melancholy of an irretrievable, unfixable past) — Ritchie is still making the same exact film he was making 20 years ago, down to finding new creative uses for pigs.

Fans of Ritchie’s early work will see The Gentlemen as a return to form from his foray into big budget blockbuster territory — rude, snappy dialogue delivered whip fast by unsavory antiheroes. There’s also some solid action sequences and a few genuinely funny moments when the punchline isn’t a white man calling Asian men “dragons.” If anything The Gentlemen is far more polished than your typical January release. But it’s all a bit tired, isn’t it?