Interview: John Hodgman and Jesse Thorn give Boston its due process 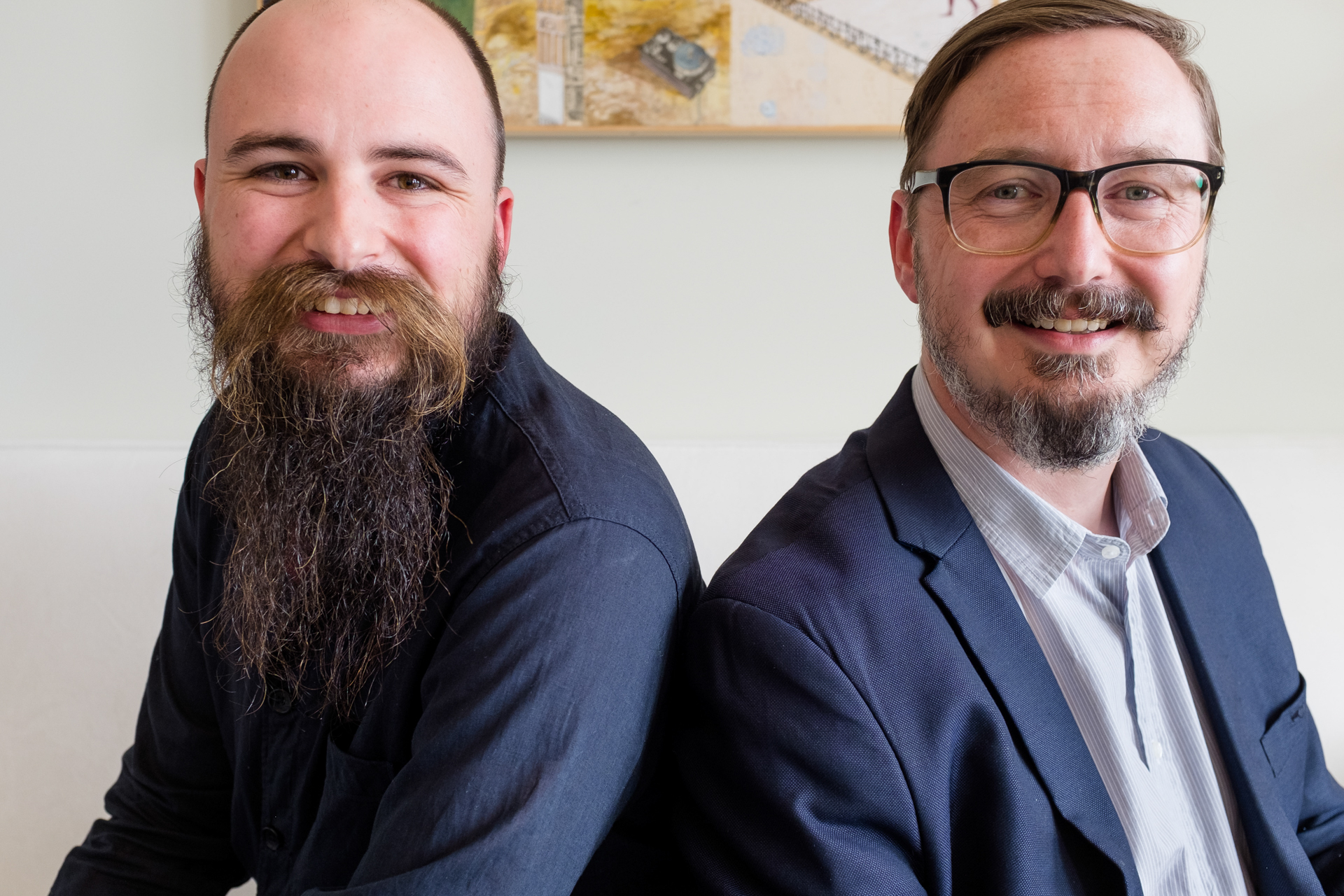 Returning to The Wilbur for another live edition of their hit podcast, the longtime duo sets out to lay down the law in Boston

There’s a very good chance that, as you’re reading this, John Hodgman and Jesse Thorn are neck deep in fine men’s wear at the Bobby From Boston warehouse in Lynn, but don’t be fooled — nothing that the guys are doing right now would overshadow how excited they are to bring some stone cold justice to Boston.

Returning to The Wilbur tonight (January 14) for another live installment of their podcast Judge John Hodgman, the duo is looking forward to not only wearing slick uniforms — Thorn, as Bailiff, donning a suit like “Bull” from Night Court, and Hodgman with, naturally, a judge’s robe — but they’re also pumped to be holding court in Hodgman’s home city once again, and getting the chance to whip up some real time “creative chaos” with their fans, err, litigants.

Vanyaland caught up with Hodgman and Thorn ahead of the show to see what folks should expect when they file into the Wilbur tonight – check out what they had to say below.

Jason Greenough: Jumping right in, you’re bringing Judge John Hodgman to The Wilbur on Tuesday night. How are you feeling about coming back to the city with this show?

Thorn: I was against it, but John convinced me.

Hodgman: I had to explain to Jesse that Boston is a major metropolitan center in the region of the United States known as New England, and somewhere in the middle of that sentence, his eyes glazed over and he just said ‘fine, fine’. I don’t even think he remembers that we’ve been to Boston before, where he and I both brought Judge John Hodgman justice to The Wilbur Theatre a couple years ago.

The Wilbur is one of my very favorite places to perform. It’s got a great feel to it, and even though it’s a big room, it’s very intimate. They treat comedians and other performers extremely well there, and not to mention, the backstage area has a wide array of interesting rooms.

Thorn: I think whenever a performer is having a homecoming, it’s always special. So, for John, Boston is home, and I’m always excited to get the chance to experience that through him.

I was actually going to ask you, Jesse, about how it feels to see the Boston crowd embrace John as one of their own, and in turn embrace the both of you, but you just answered it, so I guess we’re good there!

Hodgman: The best part about it, or one of the nice things about it is, the next day, we’re flying to San Francisco, which is Jesse’s hometown to perform there on the 16th, so it’s really just a question of which is audience is going to be better. By better, I mean, I mean larger and more vocal, and frankly, more moral. Honestly, I know the people of San Francisco are profoundly moral, whereas the people of Boston are profoundly vocal. We’ll just have to see.

Thorn: John doesn’t know this yet, but I do have a little surprise set up for the Boston show. I brought a soon-to-be Baseball Hall-of-Famer along, and people are going to be thrilled to see him. It’s Derek Jeter.

Thorn: Why?! Everybody loves him! He’s Derek Jeter!

Hodgman: Not everybody! Even I know that, with my extremely limited knowledge of sports!

Hodgman But we really do have a very special guest in Boston. Josh Kantor, who is the organist for a little organization known as the Boston Red Sox Baseball Club. He plays the organ at Fenway at every home game, like standard baseball songs like, I guess “Baseball, O Baseball”? Is that one? He also plays things like Jonathan Richman’s “Roadrunner” and other indie rock hits, and he’s going to be warming up the show at The Wilbur by playing some music for us. He’s an incredible dude, and he’ll be great to have at the show.

Thorn: The last time we were in town, Josh was kind enough to not only bring us to his organ booth, which is notably unremarkable, but he also brought us inside the Green Monster, where we could peer out onto the field. It was such a remarkable experience for a baseball nut like me to be in a special place like that, and it was an honor to have Josh invite us to do that, so we’re excited to have him at the show to play “Baseball, O Baseball,” the classic baseball hit.

Hodgman: I enjoyed going inside the Green Monster. I’m not as much of a baseball fan as Jesse, although I admire the sport for it’s lugubrious pace, but I certainly understand the significance of the Green Monster, but I really just enjoyed [being inside a wall]. That’s the dream of every creep.

Hodgman: When we do the live shows, the format is very similar to the podcast. We have two people who are having a dispute, usually of a domestic nature, like someone isn’t loading the dishwasher correctly, or I don’t know — what’s another one, Jesse?

Thorn: Someone’s dad is a pastor and keeps telling Pastoral stories about the younger one’s childhood.

Hodgman: That’s right, we recently had a live show in North Carolina where a son brought his dad to court because he was tired of his dad name-dropping his son, and using his real life stories, embarrassing childhood stories, in his sermons. We’ve had a lot of cases where kids are bringing their weird dads to court in the pointless effort to try and make them less weird. We’ve also had a lot of romantic partners who have just had it with each other, and we rule on who is right and who is wrong, but in the live show, we also have segments that you don’t hear on the podcast.

Like, we’ll listen to a number of cases quickly, and then we turn on the lights and open the floor to open court, basically, where people raise their hands and yell about the person next to them, and we hear it all in real time. It turns into quite creative chaos. Also, there are things you’ll never hear on the podcast due to rights issues and shyness, such as Jesse Thorn who has learned to play not one, but two songs on the Ukulele, and sings beautifully to both of them. I believe you’ll be doing that, as well. Right, Jesse?

Hodgman: From time to time, we’ve also had professional musicians join us on stage, like Julianna Hatfield came a couple of years ago, but we’ve decided that they make us look bad with their talent and professionalism.

What are the most rewarding parts about doing this show in front of a live audience, as opposed to doing it in the studio?

Hodgman: Well, for one thing, Jesse gets to wear a cool uniform.

Thorn: I went on a uniform buying spree like you wouldn’t believe when I found out that we were going to start doing live shows with Judge John Hodgman. I did a lot of research into bailiff uniforms, and most of them are sandy brown, and I didn’t want to wear a brown polyester suit. I wanted to look like Bull from Night Court, so I learned that the real law enforcement uniform that looks closest to Bull’s is a fire department dress uniform, which is what my uniform on stage is. But, I’ve also added custom patches and insignia for the Judge John Hodgman podcast to it, and it is the thrill of a lifetime to have the chance to wear it on stage, and pretend like I am intimidating.

Hodgman: Meanwhile, I get to wear judicial robes, which for me as a performer is a different kind of delight, because I Don’t have to care what I’m wearing that night, since it’s all covered up. I might as well be wearing sweatpants. But I think the real pleasure for me, and dare I say Jesse, as well, is the conversations we have with the audience all over the country and indeed, all over the world, and being able to meet people over the internet and telephone whose backgrounds and experiences are different, and often very cool.

The live show is an extension of that, because not only do we get to talk to people while we’re on stage, but we also post up after the show, and meet anyone who wants to come by and say “hi”. We often see people from earlier episodes who are in the area, and we meet other people that we know well. Our audience is just full of fun and interesting people, and it’s fun to get the chance to see them, get to know them, and thank them for listening. We like to maintain a relationship with the people and litigants who are both on the show and those who listen to the show.

Above everything else, not even in terms of comedy or coming back and doing this show, what are you looking forward to most about coming back and experiencing the city, post-Patriots playoff loss?

Hodgman: The schadenfreude that I will feel? [laughs]

Thorn: I have a sincere answer to that, and it doesn’t have to do with the Patriots, even though I do wish them the best, like I do with every other team that’s lost in the playoffs before the 49ers win the World Series… I mean win the Super Bowl.

Hodgman: Oh, I thought you were making a joke.

Thorn: No no. But I do actually have something I look forward to any time I’m in Boston, because contrary to Hogdman’s jokes, I do love coming to Boston.

For me, the most special thing is that I have a side career as a menswear blogger and video maker, and Boston is the home of the best men’s vintage store in the world, a store called Bobby From Boston. I first visited it many years ago when I was in town for a wedding, and I realized that I didn’t have an appropriate overcoat to wear over my black tie rig, and it was very cold, with it being Boston. I just showed up at Bobby’s, found a Chesterfield in a 42 long, it was about $50, and I bought it on the spot. I’ve since been to their warehouse in Lynn, and I’ve been to the store many times, and I always enjoy going there because there always winds up being something that I love on the shelves.

Hodgman: Wait a minute. Is that the reason we’re driving up at six in the morning, so that you can spend the afternoon at Bobby’s of Boston before the show?

Thorn: Well, yeah. We have to stop at the warehouse first…

Hodgman: Well, I’ll tell you all the places that I’d like to visit but won’t have time to, because I’ll either be prepping for the show, or spending the day at Bobby’s of Boston, I guess.