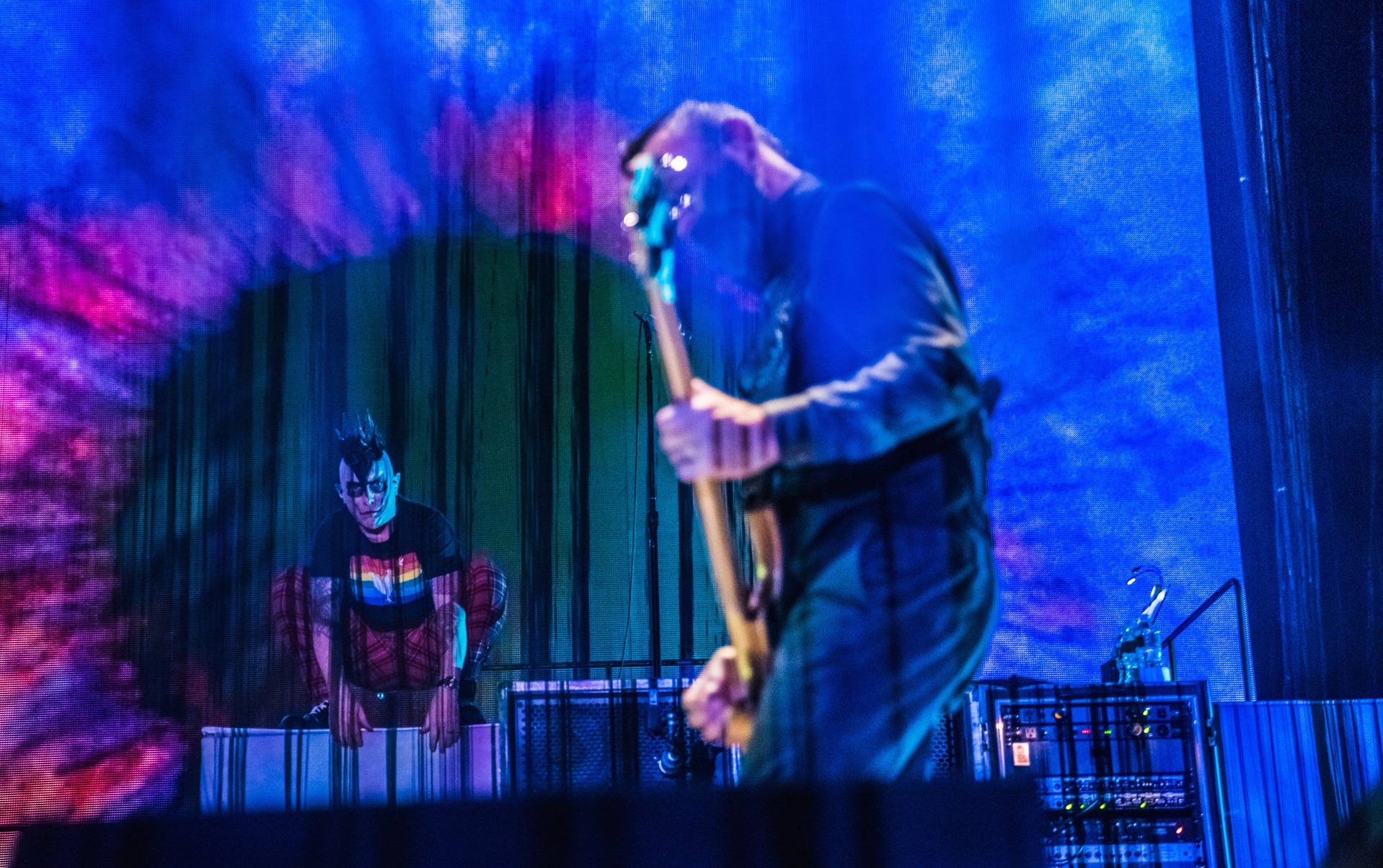 So here we have a band oft-characterized by terms like “experimentation” and “evolution” and other four-plus syllable words that start with the letter “e.” But I gotta wonder if the Tool a lucky horde of us saw play Thursday (November 14) in Boston is, in fact, Tool in their final form.

“When we wrote this song, you were not even sperm,” said Maynard James Keenan, addressing anyone less than 30 years old before cracking open “Intolerance” off 1993’s Undertow. Three decades is definitely enough time to become sperm, get ejaculated, turn into a fertilized egg which then turns into a fetus, get born, and grow into a used lawnmower salesman from Wareham who never listens to anything except Tool and MMA podcasts. Considering the TD Garden’s at-capacity stands at roughly 19,580, it appears scenarios similar to what I just described, with minor variations, have unfolded about 19,000 times that we can more-or-less verify. And let’s not get it mixed up — if 20,000 meatheads are going to gather in one place and get real amped up about something, let us be glad and cheerful when that something happens to be a rock and roll show.

Thirty years is also enough time to build an audience, learn what that audience really likes and what that audience will not abide by, and craft a maximalist vision within those parameters. See, I’m not saying Tool have grown repetitive or stagnant. I’m saying Tool are the most Tool Tool can be. Tool could change, sure. The guitar solos could fly along for even longer durations, the confounding web of polyrhythms and angular time signatures could continue to sprawl — or, spiral out, if you will — and the prog-metal quartet could go on even lengthier between-record hiatuses. But doing any of these things can only make Tool more Tool. Any non-superficial changes to the format, at this juncture, would make Tool less Tool, and more A Perfect Circle. I can’t imagine anyone would be happy about that.

Ugh, I dunno if I made my point clearly enough just then. So, okay, if you’re confused by what I’m shooting for here, lemme direct you to the 15:43 leviathan “7empest” off Fear Inoculum, which dropped in August, about 13 years after Tool’s previous album, 10,000 Days. Adam Jones redeems the entire concept of stadium rock bands hurling guitar solos completely over the top from (apologies in advance If I’m not super duper exacto precise just now) about the four-minute mark until 5:20, then from 5:40 to 9:41, then again from 10:35 to around 12:00, and once more at 13:20 until the song’s almost over. He’s tethered — hardly restrained, but nonetheless chained — to a foundation of Justin Chancellor’s menacing low-end grind and the utterly strategic, seeming free-fall of mythic drummer Danny Carey.

There’s also Keenan — paradoxically the most famous, most problematic, and particularly on Fear Inoculum, least essential contributor. He mummers and snarls about the virtue of honesty and hostile weather patterns in the background and does a perfectly fine job with all that. Aside from the vocals, everything on “7empest” is gigantic and very close to overwhelming and more complicated than it needs to be and very loud. So here’s omega-level Tool; an outsider art sensibility, plus gobs of new age-y spiritualism and consciousness expansion channeled through the prism of a monster truck rally, meticulously arranged and lovingly polished into a sum total that, somehow, totally kicks ass.

“7empest,” itself didn’t make the setlist Thursday, but I’d say its essence of omega-level Tool carried on throughout much of the endeavor. I kind of agree with the criticism that the show might’ve benefited by stretching to more than 14 songs. But considering a few selections extend well past the 10 minute-mark, I dunno, how badly did I really need to hear “Sober” again? Then again, maybe I didn’t need to hear “Ænima” again, nor did I need to hear Keenan announce the title track from his band’s 1996 landmark with a shout of “Dunkin’ Fucking Donuts!” like an idiot tourist. But by upping it a BPM or two and adding a few cosmic guitar flourishes during the “Learn to swim, learn to swim, learn to swim, learn to swim” portion of the tune, Tool murdered me where I stood.

You’re reading an article written by a dead man who occupies the afterlife, and I can tell you for a fact that there is no god and no devil and the closest thing there is is a drumkit being pummeled by Danny Carey. Anyone who listened to the final few minutes of “Forty Six & 2” on Thursday can confirm this. Carey reconnected with human fallibility during a gong solo that segued into kinetic, oddball instrumental “Chocolate Chip Trip,” because he’s a sasquatch of a dude who was cosplaying Kobe Bryant in a Lakers #8 jersey playing a gong at a metal show. Awesome? Definitely. A little goofy? Also definitely.

The same can be said of Tool’s visual components. The arena-encompassing video, laser, and light displays recalled dorm room decorations from that one semester we all tried mushrooms for the first time. But the trippiest aspect of that entire lot is the fact that the grotesque and elegant clip that accompanied “Schism” used to play on MTV. During the daytime.

The thing that’s maybe considered news was Keenan lifted his well-documented ban on unauthorized recording devices — especially smartphones — for “Stinkfist,” the proverbial bang with which the night went out. I definitely don’t want to promise Tool will do the same thing at every show, but if you’re planning to attend any of their upcoming tour dates, and you’re super bummed ‘cos you have your heart set on recording “Stinkfist” but you’re afraid of getting kicked out for filming without permission, perhaps your cause is not entirely hopeless.