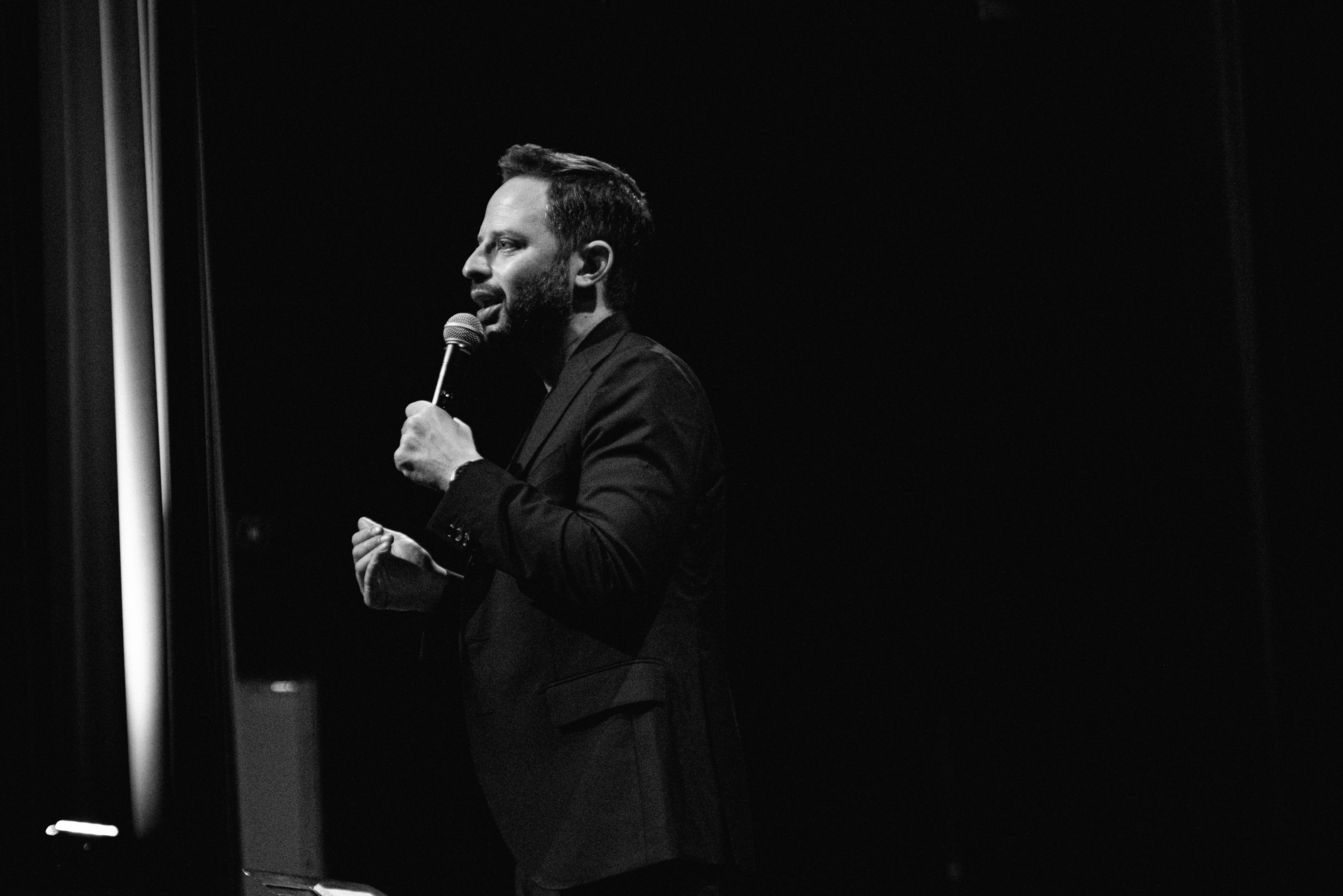 The actor, comedian, and ‘Big Mouth’ creator brings his most personal stand-up set to Medford’s Chevalier Theatre this weekend

Over the years, Nick Kroll has performed on Boston stages in a variety of ways, but as he makes his way back to the area for his latest New England rendezvous, he’s feeling a bit different about what he’s bringing to the table. Actually, you could say he’s going through changes.

Equipped with what he feels is the most complete version of a show he’s done in any format, Kroll brings his Middle-Aged Boy tour to Medford’s Chevalier Theatre on Friday (November 8) for two shows, one of which is sold out. While he’s excited to bring new material to the area, he’s even more excited to bring the show in a more open and honest direction than he’s really used to, and in many ways, he has Big Mouth to thank for that.

“This show is a little more about my life, and a little bit more revelatory about where I am at this point in my life,” Kroll tells Vanyaland. “The whole idea of the Middle-Aged Boy tour is that I’m in my forties, but in a lot of ways I still feel like a kid, and I think a lot of people can identify with that. It just feels like a much more open and honest version of where I am right now, and I think a lot of that comes from what I learned doing Big Mouth and how much I’ve been rewarded with the amount of people that watch the show because of how honest it feels.”

The newer territory of touring solo, as opposed to bringing projects like Oh Hello! around the country with John Mulaney like he’s done in the past, is strange in a number of ways for Kroll; he admits that it’s been a very different creative process when it comes to molding the material as the tour rolls on. But on the other hand, he’s happy that he’s able to do his own thing in this way, as he’s been able to draw a few key similarities from past tours that have helped him to keep learning, building, and reframing the show as it evolves.

“I brought this show to Providence a few months ago, and a lot of it is the same, but a lot of it is also changing and evolving, and it’s just a really fun way to continue to grow it,” says Kroll. “It’s a completely different beast when you do a show with someone else like John, but it’s been a lot of fun just being open and honest about who I am now.”

While he draws a lot of inspiration from what he’s done in real life, Kroll has also felt a shift in the direction of his comedy since he began creating the hit Netflix show Big Mouth, which has also helped him to feel more comfortable in being more open and honest with the crowd. He’s even drawn a lot from the creative process of making the show that he’s been able to transfer to his approach to stand-up to give his fans a well-rounded stand-up experience.

“The process of animation means that you get constantly revise and polish what’s wrong, and it takes a long time to make an episode for a show like Big Mouth,” says Kroll. “So, I feel like I’ve taken a lot of those lessons of revising and fixing the things that are working or not working in my stand-up, and use them to continue to make it a better and fuller show.”

While he’s put a lot of focus into shaping his stand-up show, Kroll’s growth as an artist has also been evident throughout the evolution of Big Mouth, which is currently in its third season on Netflix. While the first two seasons drew a lot of inspiration from his childhood, as well as that of his creative partner Andrew Goldberg, Kroll wanted to make sure that the third season dealt with issues that kids are facing today. The new season speaks to the affects of addiction to electronics and social media, Adderall use, and the dynamic shift that the #MeToo movement has brought to the forefront between boys and girls going through the throes of middle school.

Kroll has a lot to keep him busy through the start of the new year. Between the tour, the next season of Big Mouth in the works, and his starring role in Olympic Dreams, which he shot on location at the 2018 Winter Olympics with Alexi Pappas and director Jeremy Teicher, he’s also looking forward to getting another show, Human Resources, up and running. But for now, he’s just excited to return to the area and soak up the New England fall, make some people laugh, and stay far away from any sort of shellfish.

“I’ll probably take a stroll around Boston Common, and I wouldn’t be surprised if I wound up eating some dumplings in Chinatown,” says Kroll. “I’m also allergic to shellfish, so I won’t be having any clam chowder, but Boston is one of my favorite cities, because it’s so beautiful, so I’m hoping it won’t be too cold and I get to walk around a bit.”