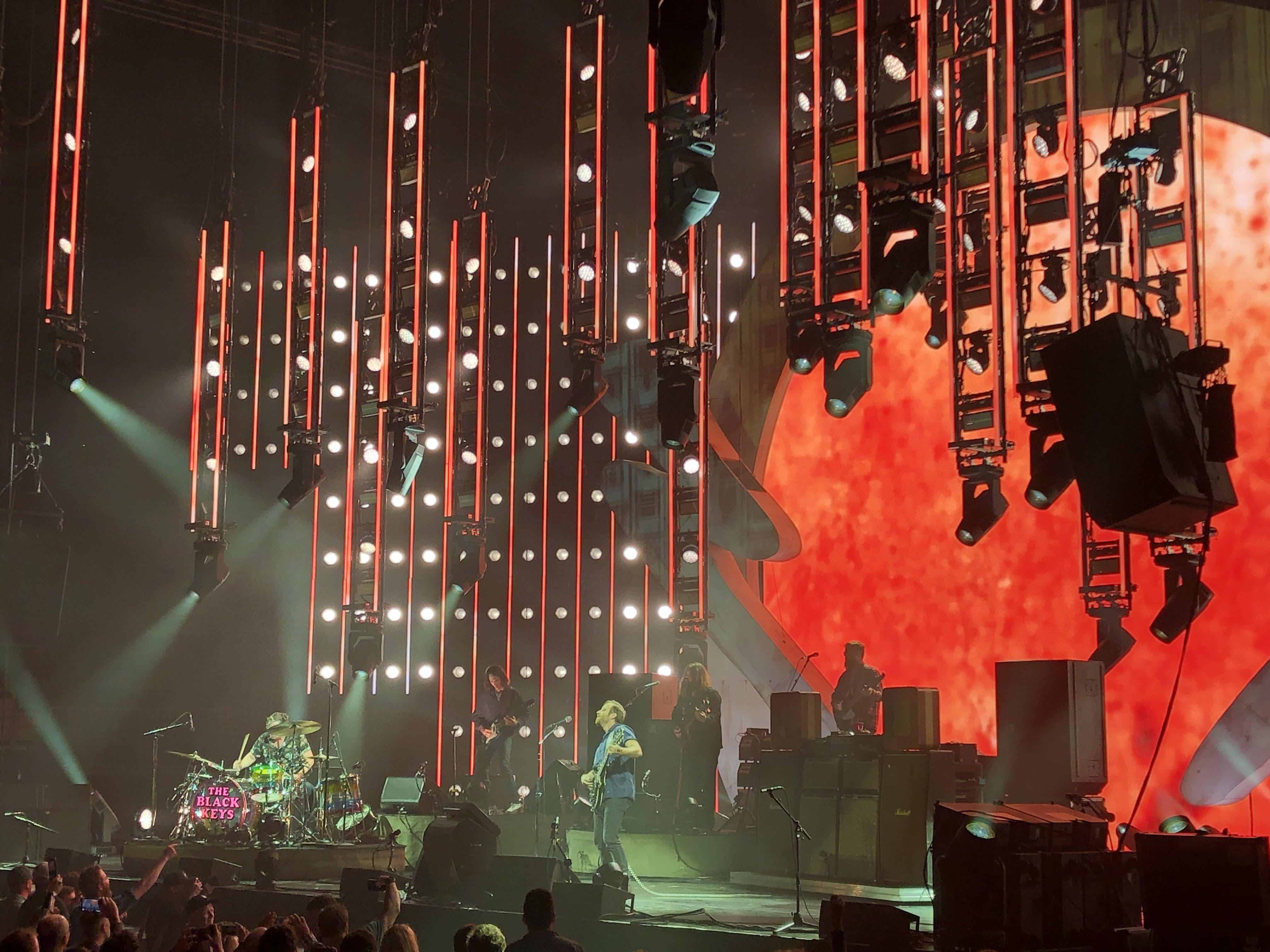 “Let’s Rock” was a mistake.

Strike that — the title of “Let’s Rock” was a mistake, and The Black Keys set out to prove that Friday night (October 11) at TD Garden.

It’s an empty suggestion — a bland one, a vague one. Worse, an outdated one. Who says “let’s rock” in 2019? Dads at a karaoke bar? An ambient artist wisecracking ironically in an Allston basement? The Black Keys never meant “let’s rock.” When the Black Keys said “let’s rock,” they meant “let’s fucking fry.”

The real message of the record bleeds through the album art, which plops a sizzling electric chair on a dead black cover. The Black Keys’ mindset here isn’t “we’re going to turn it up to 11,” the mindset is “let’s strap in with our thoughts, unattended, until we fricassee brains beyond repair.”

But it never starts like that. First, frontman Dan Auerbach had to drop his slack jaw and set the bait.

Rockstars of this post-2000 era abide by different rules that those of their flashy, deliberately trashy late-1900s predecessors. For one, their Ohio honky-tonk rock tunes can be supersized for arenas without sacrificing any of their Midwestern charm. Two, drummer and Key No. 2 Patrick Carney can wear a patterned button-up shirt without looking like a total prick.

“Burn, baby burn / You live and learn every time along the way / Lies, tellin’ lies / Hypnotize, disguising things you say,” Auerbach observed, striking the metaphorical match to flick into their set’s heap of parched-from-the-summer-sun kindling.

Themes of heat stoked the duo’s storm at all times at TD Garden, with songs about fevers (uh, “Fever”), fires (“Fire Walk With Me”), and trudging through a mire of summer days (“Go”),  notes cookin’ and cracklin’ underneath endless trusses of spotlights.

Then, Auerbach spat the real kicker: “Every woman who’s ever loved you is telling you lies.”

You see, melodically, Let’s Rock goes down smooth as an afternoon highball. Yet lyrically, there’s a lot of tussling behind the Americana sprawling from the pair’s ninth full-length effort, but it’s a welcome struggle; therein lies the much-needed friction to ramp up their course of execution.

There’s no finer example of their sweeping-drama-turned-downer than new tune “Lo/Hi,” which spelled out the situation with as few syllables as possible in the Keys’ earthy, elemental blues style, paired with some crushing all-American lyrics: “Nobody to love you / Nobody to care / If you die, nobody will hug you / No one to answer your prayer.”

Yeah, there’s either some turmoil or existentialism going down in Akron, and Let’s Rock – the album and the tour — makes few attempts to obscure it. As a backdrop, their crystal ball of a video wall represented a fisheye glazing over as it observes an acid-soaked version of this American life.

The entire experience strapped fans in one leather buckle at a time, hands gripping the armrests of the electric chair, unwittingly preparing to tap into some higher-plane-of-consciousness current.

Then Carney started the drum beat. You know the one — the thumping (now kinda commercial) simplicity of “Howlin’ For You.” And when The Black Keys flip the switch on that bad boy, the damning zzzzzzzap of fate that comes skittering out sounds more like da-da-da-DUH-da / da-da-da-DUH-da.

But even at that electrifying, modern-blues-driven peak, things never got too dangerous. This isn’t a shock rock band, nor an excessively heavy one, even when they submerged “into the basement” to pull out the title track of Thickfreakness.

When the sparks flew, the buzz was divine, eyes-roll-back-in-your head good, but still not skull-shattering; enough to knock you flat on your fanny, but not enough to “do the job,” leaving your faculties still intact for the next time around.

The final yield? Some singed hair, a delirious toothy grin, but a brain that’s throughly un-battered.

Alright, alright so maybe Let’s Rock was a fine title after all.