Live Review: Andrew Bird conducts a sense of awe and wonder in Boston 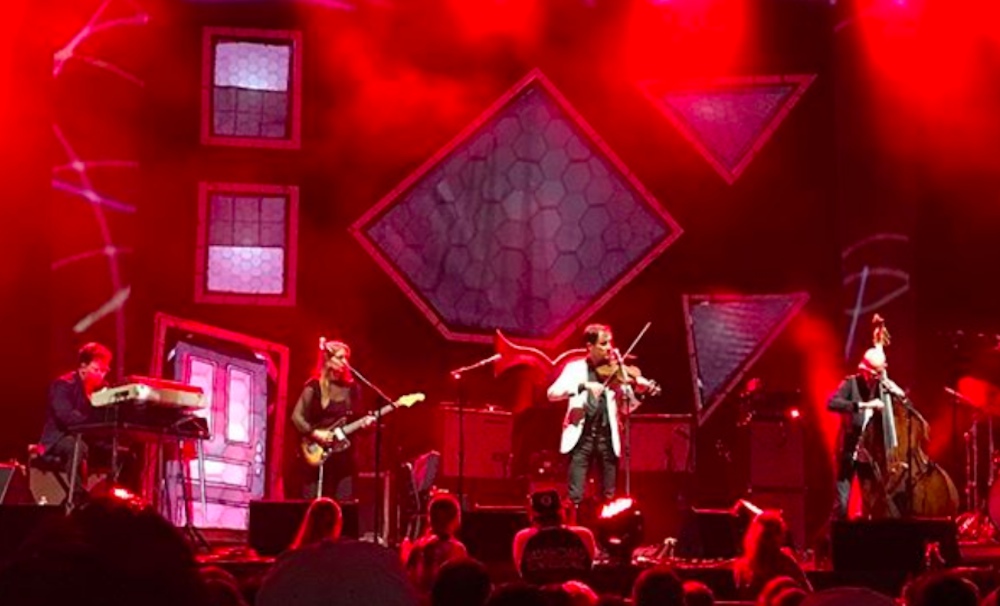 Andrew Bird, it would seem, looks at everything with wide childlike eyes and sees wonderment. He took the stage at Rockland Trust Bank Pavilion on Saturday night (September 21) by entering through a cartoonish door, gliding through with a ballooning smile, and swiftly picking up his violin. In what has become his standard performance shtick, he played his violin like a guitar, starting his looping magic without any hesitation.

It only took seconds for Bird’s looped, symphonic sound to fill the Seaport theater.

Before, the stage had been filled by a different type of sound: Calexico and Iron & Wine. Playing some of Sam Beam’s older, softer songs (“Flightless Bird, American Mouth” and “Love Vigilantes”), the group transitioned back to Calexico’s flavor of Tejano-inspired alternative rock. Beam, typically a gentle presence, allowed his voice to take flight for part of the set, eventually snuggling back into his brand of quiet lullabies and haunting harmonies.

When Andrew Bird’s brand of quirkiness overflowed the theater, it brought a different energy to the space, revitalizing an audience that had been previously lulled by Iron & Wine. If not for Bird’s whistling, it was his oft-bizarre movements that enlivened the crowd: Backing up to rotate his Spinning Horn speakers or acting as a conductor, lifting his hands with the swell of his backup vocals.

Bird ran through the first half of his newest record, ​My Finest Work Yet.​ Kicking off with “Sisyphus,” he wavered between violin, guitar, whistling, singing, and lolling his head around like a content kid.

After “Cracking Codes,” there was a moment between the next song, “Fallorun,” where Bird kept the music ringing as lights danced across the stage — a reminder of his fondness for a full visual and auditory experience.

Side A of the record finished (Bird announced it, for those who hadn’t been following) and he launched into palate cleansers from other albums. During “Truth Lies Low,” Bird swayed, the boyish awe and focus washing over him as he played his violin like a guitar once more. It’s enchanting to watch a grown man (with a degree in violin performance from Northwestern, nonetheless) lose himself in the most innocent and unguarded way to the music and scene before him. It welcomes the audience to do the same, despite the larger and seated venue.

Bird visited Side B of the record, continually pivoting his violin from guitar position to the traditional setup, occasionally slinging a guitar over his shoulder. For “Left-Handed Kisses,” his song originally sung with Fiona Apple, Madison Cunningham joined him for the duet — then again for “Something to Believe In.” Cunningham’s strong vocals complement Bird’s, playing with each others’ intentionally quivering voices.

After a few more songs, he returns for an encore: “Tables and Chairs” from one of his earliest solo albums. He sings enthusiastically, smiling as the lights swirl around him and the audience claps, swimming in his lovely sense of awe.