Once Upon 1969: The ’60s underground ends with Beausoleil and Anger 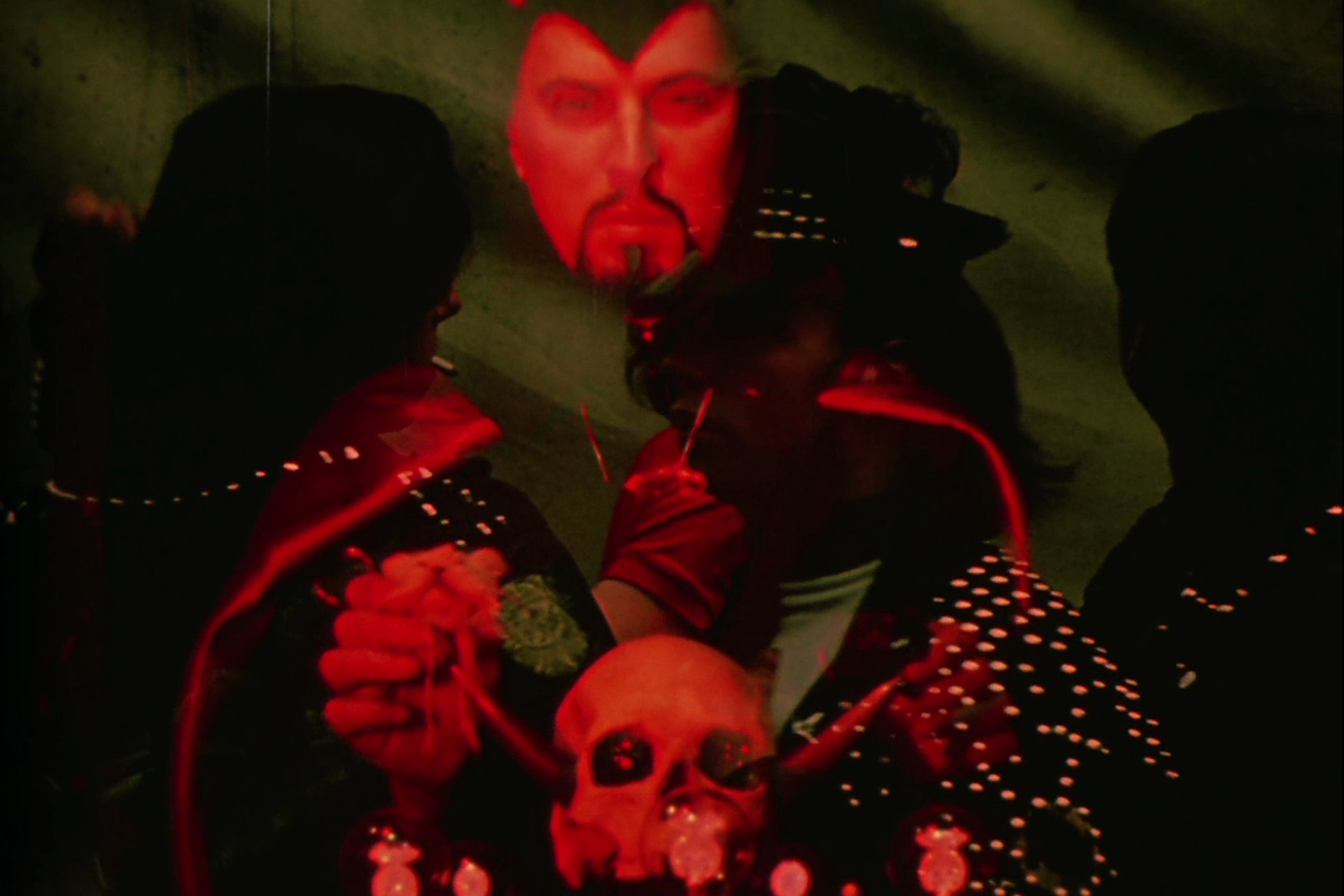 To celebrate the release of Quentin Tarantino’s Once Upon a Time in Hollywood, all this week we’ll be running pieces about the films of 1969 — the good, the bad, and the ugly, much like you’d find at the multiplex or at your local arthouse if you were going to the movies alongside Rick Dalton and Cliff Booth. You can find all of these pieces here, alongside our forthcoming review of Tarantino’s latest.﻿

As Hollywood in the 1960s saw the studios chase massive paydays by pumping increasingly larger and more absurd amounts of money into bloated, overlong epics, a small enclave of film artists created a thriving underground community churning out hundreds of avant-garde, transgressive, and experimental films. Artists such as Jack Smith, Stan Brakhage, Michael Snow, Storm De Hirsch, Ron Rice, Ken Jacobs, Jonas Mekas, and Andy Warhol broke down and remade the form of film, pushing the cinema to its boundaries and beyond in defiance of conventional narrative storytelling. Often controversial, the underground — situated mainly in New York but with stray artists also working out of California, Colorado, and elsewhere — would find itself brushing against the law, leading filmmakers to be arrested on obscenity charges and backroom screenings ending in arrests of directors and audience members alike.

Jack Smith’s Flaming Creatures (1963) would be one of the most frequent to screen before court officials. Meanwhile, Warhol — already a superstar in the fine art world — would baffle audiences with endurance films like Sleep (1963) and Empire (1964), showing long static shots of stationary subjects. The controversy surrounding the movement would often find its way into the mainstream press, who would gladly cover courtroom trials and police reports but rarely if ever did they actually attend screenings. One of the few critics to actually write about the films themselves was Jonas Mekas, who wrote his weekly “Movie Journal” column for The Village Voice from 1959 to the mid-’70s.

Mekas frequently lambasted the mainstream press, and more than once advocated that the public should “throw bricks at critics” who fail to recognize the artistry of the underground thriving just below their noses as they wrote banal reviews of studio fare. “How almost evil, it’s almost evil that our movie critics, under the present policy, review only the commercial cinema,” Mekas wrote in one 1969 column. “They call themselves film critics, but all they are is servants of money.”

Despite the flippant, poison pen rage that the Lithuanian Mekas would print in his column, he was himself a great director whose diary films evolved over the decade into cinematic epics of a wholly different kind from the Cleopatras and Doctor Zhivagos that dominated above ground. To watch Mekas’ films is to watch memories of his life played through high-frame-rate 16mm celluloid, flickering by as half-remembered dreams, phantoms of the past. His films are home movies made public, his stars his friends and family (among them the likes of John Lennon and Yoko Ono). In 1969, he released the three-hour Walden: Diaries, Notes, and Sketches. In it, his experiences are laid bare before the audience — direct and poetic, interspersed with his lonesome musings. Walden, like most of his films, features dinners, naps, childhood, vacations, trips downtown, snowstorms, drinks, parties, art shows, and quiet mornings. To watch Mekas is to be welcomed into a warm embrace.

His friend and collaborator Warhol was a very different type of filmmaker: Theoretical, ironic even. His long-take, improvised films mass produced in his New York studio, The Factory, often seemed like jokes played on the audience. While the eight-hour Empire may be his most well known feature, Warhol would direct over 90 films between 1963 and 1968, including notably the first official cinematic adaptation of Anthony Burgess’ A Clockwork Orange, under the title Vinyl (1965). Chelsea Girls (1966), co-directed with Paul Morrissey, would become one of the first major breakout hits of the underground.

His directorial career came to a near halt in the June of ‘68 when Valerie Solanas, a mentally ill actress who had appeared in some of his films, showed up in his office and shot him point blank. Warhol survived, but friends said he was never quite the same man after, significantly more timid and nervous. Most of The Factory’s filmmaking duties were turned over to Morrissey while Warhol served as producer. Many of Morrissey’s films would bear Warhol’s name in the marketing to drive up ticket sales, such as the pair of Udo Kier led horror satires Flesh for Frankenstein (1973) and Blood for Dracula (1974) (often billed as Andy Warhol’s Frankenstein and Andy Warhol’s Dracula respectively).

But Warhol made two more turns behind the camera, L’Amour in 1972 and 1969’s controversial Blue Movie. Starring Louis Waldon and Viva, Blue Movie was true to its title as a feature length adult film. It was even truer to its original title, Andy Warhol’s Fuck, which would be changed before release. Following an extended conversation in bed between the two stars, Viva and Waldon strip and have unsimulated sex for a full 33-minute reel of film. In true Warhol fashion, the camera is static and non-invasive, allowing the scene to play without direction. Afterwards, they discuss the Vietnam war, get dressed, and shower. It almost seemed playful of Warhol to make the film, as much of his late-’60s output was deliberately designed to toy with New York audiences on the prowl for skin flicks.

The Nude Restaurant (1967), for example, sold audiences on a plot about a restaurant where all the attendees are stark naked. Also starring Viva, most of the time the actresses were shown only from the head up, and what full body nudity was included often had the lanky Taylor Mead alongside. By actually depicting sex, Blue Movie hangs the lampshade on Warhol’s career as a faux-pornographer. Today the film is unavailable on home video but has played museum screenings, though a bootleg of a German television dub is floating around the back channels, albeit lacking subtitles. As the Sixties drew to a close and Warhol hid away from filmmaking, the avant-garde began to become dominated by structuralist filmmakers such as Ken Jacobs and Michael Snow whose theoretical approaches to filmmaking deconstructed the medium itself in movies like Wavelength (1967) and Tom, Tom, The Piper’s Son (1969).

But one lurid artist, an outsider among outsiders, would make one of his most iconic films in 1969. Kenneth Anger released Invocation of My Demon Brother, a 10-minute, psychedelic, occult vortex of a movie with a “soundtrack” by Mick Jagger and starring, as Lucifer, none other than Manson killer Bobby Beausoleil. Beausoleil was a young musician and sometimes actor living in California and had met Anger in the mid-Sixties. Anger was renown not only for his openly queer art films like Fireworks (1947) and Scorpio Rising (1964), Anger was also infamous for his connections to Satanist circles and figures such as Anton LaVey (who appears in Invocation). At the time of their meeting, Anger was trying to cast his film Lucifer Rising and upon seeing Beausoleil for the first time he knew he had found his leading man.

According to film historian Katrina Longworth in his podcast series You Must Remember This, Anger invited Beausoleil to live with him as he had many young men before. However, the straight Beausoleil found that he had to consistently reject Anger’s sexual advances, creating a fraught relationship between the two. During their brief acquaintance, Beausoleil filmed scenes for what would become the kaleidoscopic Invocation of My Demon Brother. Shortly after, Anger would kick him out of his house (and steal the engine to his car), ultimately leading Beausoleil to take up residence with Buddhist PhD student Gary Hinman. From there, Beausoleil would meet Charles Manson and a series of farcical missteps involving money and drug deals ended with Beausoleil stabbing Hinman to death on Manson’s word in 1969.

Initially sentenced to death, until California abolished capital punishment in 1972, Beausoleil would later contribute the soundtrack to Anger’s completed Lucifer Rising (1980) from behind bars. He is still alive today and making music from his prison cell. Anger, at age 92, is also still alive, though he hasn’t released a new film since 2010’s short Missoni. While Scorpio Rising with its homoerotic biker imagery may be the most iconic of Anger’s body of work, Invocation of My Demon Brother still ranks among his finest, even with a murderer in the lead. It is Anger’s ability to communicate the mystique of Magick, the allure of the supernatural, the dark spiritual, that makes it stand so singularly in his filmography.

“Invocation is complexly involved with magic, myths, and rituals, the exact meaning of which escapes me,” Jonas Mekas wrote in his Movie Journal column on August 21, 1969 — just weeks after the Tate-LaBianca murders occurred. “But even without knowing the meanings, I can feel the tremendous energies of the film, energies that are being released by the images, by the movements, by the symbols, by the situations. I know that some readers would like to know what kind of meanings and symbols are locked in this film. But I have this inborn lack of interest in literal, historical, symbolic meanings of images.”

Mekas, who dedicated his life to the art of film and to preserving the rarities of the underground movement through his Anthology Film Archives, saving the avant-garde treasures of the ’60s, died this past January at the age of 96. He is missed.